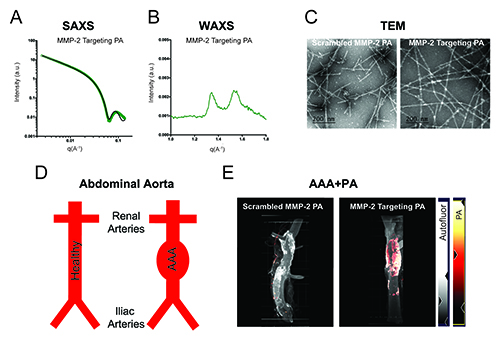 Abdominal aortic aneurysms (AAA) cause approximately 10,000 deaths each year in the United States. An AAA occurs when a section of the aorta that runs through the abdomen is weakened and begins to bulge. If the aneurysm ruptures, a person has a 90% chance of dying. As of now, the only treatment for an AAA is surgery and that only works if it is caught in time. A new study, published in the journal ACS Nano, involved experiments performed at the U.S. Department of Energy’s Advanced Photon Source (APS), which revealed a way to use nanofibers to target AAAs. These nanofibers may one day be deployed to diagnose AAAs earlier and to deliver targeted drugs to treat AAAs, reducing the number of people who die from this condition.

At about an inch in diameter and a foot long, the aorta is the largest artery in the body, and it supplies blood to most of the major organs. An abdominal aortic aneurysm (AAA) is a weakened section of the aorta that begins to balloon and can eventually rupture, putting the person at severe risk of death. AAAs develop over a prolonged period of time so tools that make it easier to identify them—and to direct pharmaceuticals to the affected area—could save lives. This new study reports an exciting advancement in this direction—the development of a nanofiber tracer that localizes to AAAs.

After designing and synthesizing the peptide amphiphiles, the researchers carried out a series of experiments employing a variety of techniques (Fig. 1). They used transmission electron microscopy to confirm that the peptide amphiphiles were successfully forming nanofibers. They then performed x-ray scattering experiments at beamline 5-ID-D of the DuPont-Northwestern-Dow Collaborative Access Team (DND-CAT) at the APS to get more detailed information about the molecular structures that makeup the nanofibers. The APS is an Office of Science user facility at Argonne National Laboratory.

While the MMP-2 targeting peptide amphiphile predominantly localized to the aorta of the rats, it was also found in the kidney, liver, spleen, and lung, although at much lower levels. The tracer remained localized to the AAA site for at least 24 hours but was largely cleared by 72 hours.

Together, these findings suggest that MMP-2 targeting peptide amphiphile nanofibers could one day be used as a diagnostic tool to detect early phases of AAA development. Additionally, these nanofibers could be harnessed for a targeted drug delivery system for a nanotherapeutic that could deliver a higher effective dose at the site of the aneurysm and have fewer side effects than drugs delivered to the entire body, transforming treatment options for this deadly condition.  ― Neil Savage

This study was supported, in part, by funding from the University of North Carolina School of Medicine. T.D.C. acknowledges funding support from an American Australian Association Fellowship and the Center for Regenerative Nanomedicine at the Simpson Querrey Institute for BioNanotechnology at Northwestern University. Technical support was provided by several core facilities at UNC Chapel Hill including: the UNC Microscopy Services Lab, the Small Animal Imaging Facility at the Biomedical Research Imaging Center, the R. L. Juliano Bioinformatics Core facility, and the Neuroscience Microscopy Core. The TEM studies were supported by a grant to J.D.G. from the National Institutes of Health (5R0)-ES031635. The Microscopy Services Laboratory, Department of Pathology and Laboratory Medicine, is supported in part by P30 CA016086 Cancer Center Core Support Grant to the UNC Lineberger Comprehensive Cancer Center. Research reported in this publication was supported in part by the North Carolina Biotech Center Institutional Support Grant 2016-IDG-1016. MST and CD spectroscopy experiments were conducted at the UNC Macromolecular Interactions Facility, which is supported by the National Cancer Institute of the National Institutes of Health under award number P30CA016086. DND-CAT is supported by Northwestern University, E.I. DuPont de Nemours & Co., and The Dow Chemical Company. Peptide amphiphile synthesis was performed in the Peptide Synthesis Core Facility of the Simpson Querrey Institute at Northwestern University. The U.S. Army Research Office, the U.S. Army Medical Research and Materiel Command, and Northwestern University provided funding to develop this facility, and ongoing support is being received from the Soft and Hybrid Nanotechnology Experimental (SHyNE) (NSF ECCS-2025633). This research used resources of the Advanced Photon Source, a U.S. Department of Energy (DOE) Office of Science User Facility operated for the DOE Office of Science by Argonne National Laboratory under Contract No. DE-AC02-06CH11357.