A Tuneable Catalyst for Recycling Carbon Dioxide into Synthetic Fuel 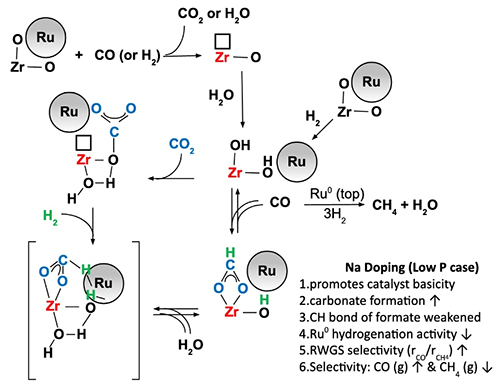 Summer vacation in the Anthropocene is not the idealized cross-country family trip filled with cooler evenings and fireflies. Gasoline prices are too high to road trip and the weather is too hot to stay out long. But these seemingly unrelated problems might have related solutions. Environmental chemists and engineers are exploring ways to update existing industrial chemical processes that involve both carbon dioxide and synthetic fuels. Recent research by international collaborators using the U.S. Department of Energy’s Advanced Photon Source (APS) and published in the journal Applied Catalysis B: Environmental demonstrates a new, low-pressure catalyst for a chemical reaction which recycles carbon dioxide and allows the recycling process to be tuned for particular output products, specifically differentiating between synthetic natural gas and synthetic fuels, improving the effectiveness of existing pathways for carbon dioxide recycling.

Recycling carbon dioxide can be done in many ways. In the direct methanation method, the carbon dioxide is converted to synthetic gas in a process that involves adding hydrogen atoms, a procedure called hydrogenation. In the method using the reverse water-gas shift reaction, the carbon dioxide is converted to carbon monoxide, which is sent downstream to a Fischer-Tropsch synthesis reactor where the carbon monoxide is hydrogenated to primarily linear hydrocarbons, and then additional chemical processing is carried out to produce synthetic fuel. In both methods, the result is carbon dioxide recycled into a re-usable synthetic hydrocarbon. Since CO2 conversion requires a catalyst, creating a catalyst that could be used to select one method over the other would be valuable for improving our ability to recycle carbon dioxide. If the catalyst promoted a reaction environment opposed to long-chain hydrocarbon growth, the output of the reaction could be synthetic gas. Alternatively, the catalyst could promote the reverse water-gas shift reaction to produce to produce carbon monoxide, which would then be converted to long-chain hydrocarbons using a downstream process called Fischer-Tropsch synthesis, for the production of synthetic fuels.

To explore possibilities for this tunable catalyst, the collaborators built on existing research. They utilized the efficacy of zirconia-supported metal nanoparticles at catalyzing the water-gas shift reaction. Additionally, they utilized the fact that substrates doped with sodium promote the water-gas shift reaction. By applying the chemical principle of microscopic reversibility, the team could incorporate substrates doped with sodium into their catalyst design that could also promote the reverse water-gas shift reaction. The team created a new catalyst incorporating ruthenium and sodium-doped zirconium dioxide. They varied the amount of sodium doping―none, 0.5%, 1.0%, 1.8%, 2.5%, and 5.0%―to allow them to measure the products generated during the recycling reactions as a function of the amount of sodium doping.

They performed extensive characterization of the catalysts before, during, and after using them to catalyze the hydrogenation reaction. The mechanism for the reaction is shown in Fig. 1. As part of the initial characterization, the team measured x-ray absorption near edge structure spectra and extended x-ray absorption fine structure spectra of the catalysts with the Materials Research Collaborative Access Team (MR-CAT) 10-ID-B beamline at the APS (the APS is an Office of Science user facility at Argonne National Laboratory). During the characterization, they also examined traits including the catalyst's response to temperature and the catalyst's surface composition. Following the hydrogenation reaction, they investigated the catalyst's stability.

The team found that increasing the sodium doping increased the basicity of the hydrogenation catalyst. The increased basicity of the reaction environment had two effects. One, it suppressed methanation: the sodium covered over ruthenium sites, suppressing their hydrogenation activity leading to methane. And second, the increased basicity promoted the reverse water-gas shift reaction: it accelerated the formation of formate and promoted the formation of carbon monoxide at the ruthenium-substrate interface. However, the higher amounts of sodium also negatively affected the catalyst's stability.

The team concluded that increasing the amount of sodium-doping assists the production of carbon monoxide (and the reverse water-gas shift reaction) and suppresses methanation. Thus, choosing specific amounts of sodium with which to dope the ruthenium and zirconium dioxide catalyst will allow environmental chemists to tune the reaction to promote downstream production of either synthetic gas (low sodium) or CO for the production of synthetic fuel (higher sodium), improving the effectiveness of existing pathways for carbon dioxide recycling.  ― Mary Alexandra Agner