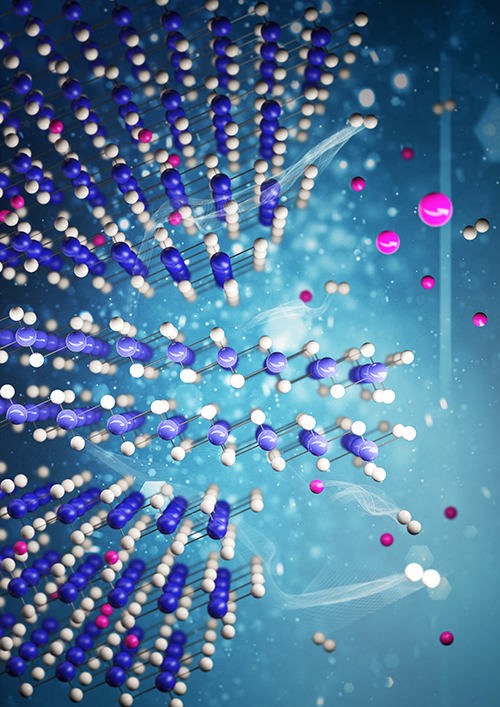 Lithium-ion batteries (LIBs) are the go-to energy storage solution for everything from cellphones and laptops to electric cars because of their enormous energy capacity and extended recyclability. Those qualities can be enhanced by the choice of cathode materials, which are usually layered oxides using transition metals such as manganese, cobalt, and nickel. One of the strongest candidates is lithium nickel oxide, LiNiO2 or LNO, which features high capacity, reduced costs, and avoids the ethical issues associated with the cobalt supply chain. However, the utility and practicality of LNO cathodes is hampered by poor stability and electrochemical degradation, especially when cycled at higher operating voltages over 4 volts. Researchers turned to the high-brightness x-ray beams from the U.S. Department of Energy’s Advanced Photon Source (APS) to investigate the workings of LNO degradation phenomena and found that oxygen stacking lattice changes are the primary culprit. They also demonstrated that a graphene-based surface coating can substantially mitigate LNO high-voltage degradation. The work was published in Advanced Materials.

To probe the detailed mechanisms leading to high-voltage LNO degradation, the experimenters conducted synchrotron powder x-ray diffraction (XRD) studies of LNO powder samples at the DuPont-Northwestern-Dow Collaborative Access Team (DND-CAT) x-ray beamline 5-BM-C of the APS (the APS is an Office of Science user facility at Argonne National Laboratory). As the phase transitions of delithiation begin, the LNO structure displays O3-type oxygen stacking, which becomes O1-type with continued charging above about 4 V. Although this O1 stacking might be expected to revert back to the O3-type during relithiation, the investigators found that a considerable number of O1 stacking faults remain with repeated cycling. These also appear much earlier under high states of charge than first principles calculations would suggest.

Ni-rich layered oxides such as LNO also tend to lose surface oxygen during charging to high levels, which creates instability and drives the stacking transition. The formation of oxygen vacancies coupled with the O3-O1 stacking changes leads to a degradation cascade in the LNO structure with the appearance of NiLi defects that make the O1 stacking faults irreversible. With repeated cycles, this combination of faults causes increasing particle deformation at the microscale with cracking, bending, and creep, compromising electrical connections and resulting in steady capacity loss (Fig. 1).

Given these observations, the investigators reasoned that preventing or suppressing initial surface oxygen loss might forestall the subsequent degradation cascade and preserve LNO capacity at high voltages. They tested this hypothesis by coating LNO powder particles with a hermetic layer of graphene, known to suppress oxygen evolution in cathode materials. Comparison of coated and uncoated LNO particles under scanning electron microscopy and cyclic voltammetry demonstrated that the H2-H3 phase transition is definitively affected in the graphene-coated particles.

The researchers repeated these experiments with larger LNO particles with and without graphene coating. They found that the larger graphene-coated particles displayed a substantially improved cycle life not only over the bare particles but even the smaller-sized coated samples, because the increased size reduces the electrolyte-bulk interface area and thus oxygen loss.

The present work provides not only detailed insight into the source of nagging technical problems of limited capacity and cycle life that have hampered the widespread adoption of high Ni-content layered oxide cathodes such as LNO for high-voltage uses but also points to a practical solution. By suppressing oxygen evolution at the initial electrochemical phases with the simple expedient of a graphene-based coating, the superior capacity of LNO cathodes can be preserved at high voltage, unlocking the full commercial potential of these valuable materials.  ― Mark Wolverton

The authors thank Beam Scientist Mike Guise for his valuable assistance in the beamline during the COVID-19 pandemic. Also, the authors thank DND-CAT Director Denis T. Keane for his support and helpful discussions. This work was primarily supported by the Center for Electrochemical Energy Science, an Energy Frontier Research Center funded by the U.S. Department of Energy (DOE) Office of Science-Basic Energy Sciences under Award # DE-AC02-06CH11357. This research was also supported by the Basic Science Research Program of the National Research Foundation of Korea (NRF) funded by the Ministry of Education (Grant No. 2020R1A6A3A03038630). Graphene powder production was supported by the National Science Foundation Scalable Nanomanufacturing Program (Grant Nos. NSF CMMI-1727846 and NSF CMMI-2039268) and the National Science Foundation Future Manufacturing Program (Grant No. NSF CMMI-2037026). This work made use of the EPIC facility of the Northwestern University NUANCE Center, which is supported by the Soft and Hybrid Nanotechnology Experimental (SHyNE) Resource (Grant No. NSF ECCS-1542205), the Materials Research Science and Engineering Center (Grant No. NSF DMR-1720139), the State of Illinois, and Northwestern University. DND-CAT is supported by Northwestern University, The Dow Chemical Company, and DuPont de Nemours, Inc. Baseline material synthesis was conducted at the Argonne National Laboratory Materials Engineering Research Facility (MERF). MERF is supported by the U.S. DOE Office of Energy Efficiency and Renewable Energy, and the Vehicle Technologies Office. This research used resources of the Advanced Photon Source, a U.S. DOE Office of Science User Facility operated for the DOE Office of Science by Argonne National Laboratory under Contract No. DE-AC02-06CH11357.