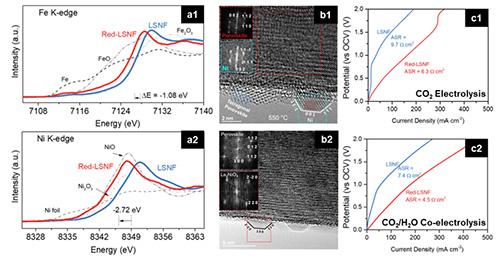 To tackle the increasing burden of climate change driven by excessive use of fossil fuels, scientists have sought various ways to recycle carbon from carbon dioxide (CO2). One potential way to accomplish this is by converting CO2 into valuable chemicals or fuels that can serve as alternate and renewable energy sources. Electrochemical cells are relatively simple tools that can chemically reduce CO2 and water (H2O) to create dihydrogen (H2), carbon monoxide (CO), and dioxygen (O2). A technology worth exploring in this area is the solid oxide electrolysis cell (SOEC), which offers greater conversion efficiency compared to competing technologies due to its ability to operate at higher temperatures, enhancing the reaction kinetics. The lanthanum ferrite perovskite La0.7Sr0.2Ni0.2Fe0.8O3 (LSNF) could be a promising cathode material for SOECs, offering thermochemical stability, superior ionic and electronic conductivity, and structural flexibility. However, under reducing conditions, this material allows NiFe and La2NiO4 nanoparticles to migrate from its bulk to the surface, a phenomenon known as exsolution. Using various techniques including research at the U.S. Department of Energy’s Advanced Photon Source (APS) the authors show that these nanoparticles significantly improve the cell’s electrochemical performance compared to LSNF that wasn’t chemically reduced. These results were published in the Journal of Materials Chemistry A.

To better understand exsolution of nanoparticles in LSNF, the researchers used a variety of experiment techniques including x-ray absorption near edge spectroscopy (XANES) conducted at the Materials Research Collaborative Access Team (MR-CAT) x-ray beamline 10-BM at the APS (Fig. 1), transmission electron microscopy, x-ray photoelectron spectroscopy and x-ray diffraction to examine LSNF’s crystal and molecular structure. Their results showed that its basic structure matched the generic formula for lanthanum ferrite perovskites of ABO3, where A represents an alkali or alkaline Earth metal ion, B represents a transition metal ion, and O represents oxygen. By exposing this material to high temperatures, the researchers created oxygen vacancies to serve as catalytically active sites where adsorption and subsequent reduction of H2O and CO2 can occur.

The researchers then chemically reduced this material in a 5% H2 balanced N2 atmosphere at temperatures ranging from 30 to 800° C. As the temperature rose to 400° C and above, environmental transmission electron microscopy and inverse fast Fourier transform analysis revealed the emergence of NiFe and La2NiO4 nanoparticles on the surface of the LSNF, about 2 nm in size. This effect was reversible, with the nanoparticles able to reincorporate back into the LSNF lattice under oxidizing conditions.

Further experiments comparing LSNF with reduced LSNF (Red-LSNF) using X-ray photoelectron spectroscopy and XANES showed that the reduction of LSNF contributed to decreased oxidation states in Fe and Ni ions that led to Red-LSNF being more catalytically active for co-electrolysis of H2O and CO2. Reduction also increased the amount of oxygen vacancy sites that caused a stronger affinity for H2O and CO2.

Together, these effects provided a significant boost in electrocatalytic performance for SOEC’s constructed with Red-LSNF as the cathode material. Tests showed that Red-LSNF ultimately improved the area-specific resistances derived from polarization curves by 66 to 73% for H2O, CO2, and H2O/CO2 electrolysis at 800 °C. The authors suggest that Red-LSNF, with its exsolved nanoparticles, could offer a viable solution to developing LSNF catalysts with improved activity and greater usability in SOECs—which could eventually lead to practical ways to both reduce atmospheric CO2 and generate alternate, environmentally friendly fuels.  ― Summer Allen

The authors gratefully acknowledge the financial support provided for this work by the U.S. Department of Energy (DOE) Office of Science-Basic Energy Sciences under the Award Number DE-FG02-07ER15896 and the U.S. National Science Foundation, under the award number 1932638. Part of the electron microscopy imaging was performed at the Center for Electron Microscopy and Analysis (CEMAS) at the Ohio State University. This research used resources of the Advanced Photon Source, a U.S. DOE Office of Science User Facility operated for the DOE Office of Science by Argonne National Laboratory under Contract No. DE-AC02-06CH11357.