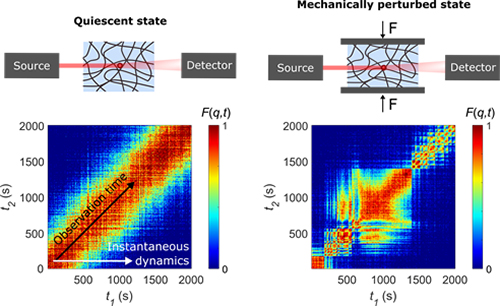 We all know that it's important to relax once now and then, but sometimes the way in which it is done makes a big difference. That's the case with technologically valuable soft materials that undergo dynamic arrest such as gels, glasses, and emulsions, and which display very complicated relaxation behavior. A team of investigators used the U.S. Department of Energy’s Advanced Photon Source (APS) for their studies of the detailed microscopic dynamics of relaxation in a model soft gel, establishing a previously elusive connection between the rearrangement events occurring on the microscopic scale and the observable stress relaxation behavior on the macroscale. The work, published in the Proceedings of the National Academy of Sciences of the United States of America, provides a deeper understanding of the origins of the microscopic motions inside soft materials, and their connection to macroscopic physical properties such as the “softness” of a gel.

One of the major challenges in studying the microscopic motion of particles inside soft materials has been the phenomenon of “rheological aging”. This is a process in which the constant thermal motion of the constituent particles causes a slow change in the internal structure and thus the property of a material (for a familiar example of this, consider the yogurt in your fridge which gradually expels a watery layer as it ages and becomes stiffer and denser, a process also known as syneresis). Aging processes are known to produce highly complex microscopic dynamics inside soft materials that mask the motion of particles in their stationary or “quiescent” states. Thus, the research team designed a soft gel material in which this aging effect was suppressed, and this allowed them to study the internal motions of the gel in a quiescent state as well as in response to controlled perturbations.

The fact that many soft materials show a complex broad distribution of stress relaxation times when viewed from the macroscopic perspective is well-established (and is also displayed in the team’s non-aging sample). However, the connection of these observations to microscopic-scale relaxation behaviors has been hard to pin down. To address this, the team performed XPCS studies on a quiescent material gelled in a capillary in situ and demonstrated that “superdiffusive” dynamics were prevalent throughout the microstructure, i.e., material elements in the relaxing gel moved faster than that predicted by the classical law of Fickian diffusion. This signified the release of internal stresses built up in the gel during dynamic arrest.

By carefully comparing measurements over a range of temperatures, the team found that the timescale of this superdiffusive process was equivalent to the mean timescale of macroscopic stress relaxation in the gels, a result consistent with the idea that the microscopic origins of stress relaxation lie in the constant rearrangements occurring inside the microstructure which are dictated by internal states of stress. They also showed that these stresses are anisotropic, resulting in faster relaxation processes near the walls constraining the gel which prevent the relaxation of internal stress during gelation. Overall, these observations confirm that trapped local stresses within the gel clusters drive relaxation at macroscopic scales as well.

With these experiments, the team has demonstrated a link between the very small and the very large worlds of dynamically arrested soft materials. What may appear to be simple linear viscoelastic behavior on the macroscale is governed by a complex set of dynamical behaviors at the microscale. The researchers suggest that combining in situ measurements of microscopic relaxation processes induced by other types of small-scale perturbation events together with bulk macroscopic stress relaxation behavior (especially with the imminent arrival of higher-intensity x-rays from the upgraded APS) could reveal even more intriguing insights into physics of arrested soft materials.   ― Mark Wolverton, Jake Song, and Gareth H. McKinley