Development of a Nanoparticle Vaccine against Epstein-Barr Virus 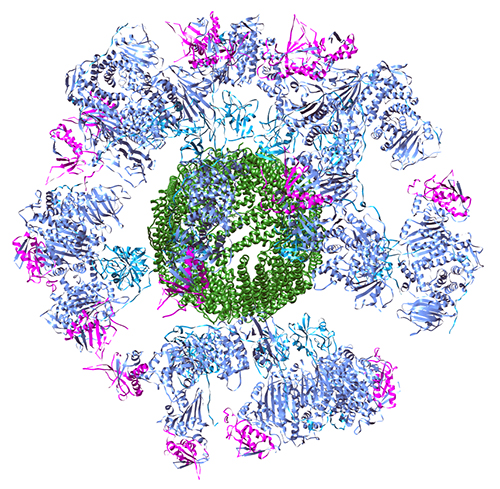 Epstein-Barr virus (EBV) is the cause of infectious mononucleosis and has been associated with the development of a number of different cancers as well as multiple sclerosis. Over 95% of adults worldwide have already been infected and most of us harbor the virus in a latent (inactive) form. There are currently no specific treatments or vaccines for EBV but it is estimated that EBV is associated with over 200,000 cases of cancer per year so a vaccine could make a significant impact. However, vaccine production has been slowed by a lack of animal models for the virus as rodents do not get infected naturally with EBV. Recent work from a collaboration between Sanofi, ModeX Therapeutics, and researchers at the National Institutes for Health has taken a nanoparticle approach to developing vaccines that can be tested in a humanized mouse model that overcomes these challenges. Their promising results, based in part on data obtained at the U.S. Department of Energy’s Advanced Photon Source (APS) and published in the journal Science Translational Medicine, may lead to human trials of an effective EBV vaccine.

The underlying mechanisms for how EBV causes disease are not well understood and, with the lack of anti-viral treatments, vaccines appear to be the best option for blocking active infection. The virus infects human cells through glycoproteins on the surface of the virus that can interact with our cellular proteins and allow the virus to enter our cells. These glycoproteins, called gp350, gH, gL, and gp42 are the target of neutralizing antibodies produced by our immune system when we have an EBV infection and, thus, are also the target of vaccine efforts. Previous vaccine efforts using only the gp350 molecule as the immunogenic agent did not completely block viral infection in clinical trials.

This led the research team to test a nanoparticle vaccine approach using multiple viral glycoproteins to elicit a stronger anti-EBV response. They designed single peptide polyproteins that contain the desired combinations of the glycoproteins for testing, including gH/gL and gH/gL/gp42. Crystal structures of the two polyproteins showed that they adopt the same three-dimensional structures as previously solved structures. The diffraction data for the gH/gL polyprotein were collected at the Life Sciences Collaborative Access Team 21-ID-D beamline at the APS. Next, they genetically fused the two polyproteins with a bacterial ferritin, which acts as the nanoparticle core and allows for self-assembly of nanoparticles that display multiple copies of glycoproteins on the surface of the particle in their natural orientations. This provides a way to display the proteins in a three-dimensional array that will hopefully elicit a robust immune response. The team used dynamic light scattering and transmission electron microscopy to verify that the nanoparticles adopted the expected size and structure.

The next challenge was to show that the nanoparticle vaccines could elicit an immune response in animals. The team was able to show that the nanoparticle vaccines do induce the generation of neutralizing antibodies in mice that can prevent EBV infection of human cells, and that the gH/gL and gH/gL/gp42 nanoparticles can be combined with the previously developed gp350 nanoparticles without causing any disruption of either response. This is important because gp350 is the most abundant EBV glycoprotein and the one that is most often recognized by naturally occurring immune responses, so it should ideally be included in a final vaccine preparation.

Moving forward with their bivalent nanoparticle vaccines―the gH/gL plus gp350 nanoparticles and the gH/gL/gp42 plus gp350 nanoparticles―the researchers verified immune responses in other species. These nanoparticles elicited neutralizing antibody responses in both ferrets and monkeys, and antibodies from vaccinated animals blocked EBV infection of human host cells. Finally, the team used mice engineered with human proteins that make them susceptible to EBV infection. These “humanized” mice can be infected with EBV. Passive transfer of the neutralizing antibodies generated by the bivalent nanoparticle vaccine preparations in regular laboratory mice showed that these humanized mice could be protected from both EBV viral infection and from development of EBV-related lymphoma.

Although both bivalent preparations elicited strong immune responses, the team plans to move forward with the next steps of vaccine development for the bivalent gH/gL/gp42 plus gp350 vaccine as inclusion of the gp42 molecule may mimic natural infection better and enhance the complexity of the immune response.  ― Sandy Field

This study was funded by Sanofi R&D and the Intramural Research Program of the 378 National Institute of Allergy and Infectious Diseases. Use of the Life Sciences Collaborative Access Team was supported by the Michigan Economic Development Corporation and the Michigan Technology Tri-Corridor (Grant 085P1000817). This research used resources of the Advanced Photon Source, a U.S. DOE Office of Science user facility operated for the DOE Office of Science by Argonne National Laboratory under Contract No. DE-AC02-06CH11357.