Microbes in the Gut Drive Toxicity of Environmental Chemical 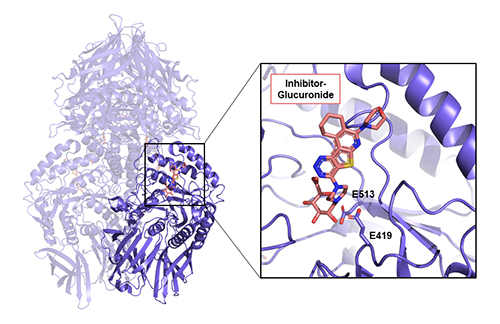 More diseases have been attributed to chronic inflammation of intestinal tissues in the last few decades and have been linked to environmental chemicals such as triclosan, an antimicrobial agent used in soaps, toothpastes, and other hygienic products. Previously, research showed that when triclosan enters the body, various organs, including the liver, metabolize it into a biologically inactive compound slated for excretion. Now, using the U.S. Department of Energy’s Advanced Photon Source (APS), an international team of scientists has shown that when this inert form of triclosan enters the intestines, microbes in the gut reconvert it into its toxic form, which exacerbates colitis and colorectal tumors. Identifying this previously unknown mechanism demonstrates that the gut microbiota plays a key role in the toxicity of environmental chemicals and highlights the importance of considering gut microbiota in evaluating the toxic potential of those chemicals.

In 2016, the U.S. Food and Drug Administration (FDA) removed triclosan from over-the-counter soaps, but it is still approved for use in toothpaste, mouthwash, and other products that reach the intestinal tract. That makes it an object of intense focus for researchers studying environmental risk factors of inflammatory bowel disease and colon cancer.

When triclosan enters the body, it's metabolized into a biologically inert compound by the attachment of a sugar molecule—a common way our bodies inactivate a range of biomolecules. The inert, sugar-modified triclosan is marked for excretion and passes to the intestines. This research shows that when sugar-decorated triclosan reaches the intestines, microbes in the gut remove the sugar and use it to fuel their own growth. Unfortunately, removing the sugar also reconverts the triclosan into a form that’s toxic to the host.

The research differed from typical research on gut microbiota, which is normally conducted at the level of gene sequencing. Instead, this study focused on identifying specific proteins made by the microbes that could latch onto a triclosan-like molecule, and then determining which of these proteins could catalyze a reaction that affected the outcome in a mouse model or human.

To identify the proteins involved, the scientists probed mouse and human fecal material and found a high level of β-glucuronidase (GUS) enzymes, ubiquitous proteins that degrade biomolecules in anti-bacterial defense strategies and normal cellular function. Once the proteins were identified, the researchers set out to determine the molecular mechanisms by which the GUS enzymes reconverted inert sugar-decorated triclosan into its toxic form. For this they used the National Institute of General Medical Sciences and National Cancer Institute (GM/CA-XSD) x-ray beamline 23-ID-D at the APS to solve the crystal structures of two different GUS enzymes. The APS is an Office of Science user facility at Argonne National Laboratory.

The first enzyme was Roseburia hominis 3 GUS. That crystal structure enabled the researchers to predict which parts of the protein contact sugar-decorated triclosan and are critical to the enzyme’s ability to reactivate triclosan. Further experiments tested and confirmed their predictions.

The second enzyme they crystallized was Faecalibacterium prausnitzii L2-1 GUS (FpL2-1, Fig. 1). That’s where things got more complicated. In previous work, the team had developed inhibitors that selectively block the activity of microbial GUS enzymes. They hypothesized that if the microbial GUS enzymes they identified in the fecal material regenerate the toxicity of triclosan, then a GUS inhibitor should block that activity. To test this idea, they crystallized FpL2-1 with a GUS inhibitor (GUSi). They found that the inhibitor intercepts the catalytic cycle of the enzyme, trapping it at a certain spot by permanently attaching to the active site.

Further experiments in vivo and in vitro revealed that inhibiting GUS enzymes with GUSi abolished the colitis-promoting effects of TCS.

Taken together, these findings define a novel mechanism in the toxicity of prevalent environmental compounds like triclosan.  ― Judy Myers

GM/CA@APS has been funded by the National Cancer Institute (ACB-12002) and the National Institute of General Medical Sciences (AGM-12006, P30GM138396). This research used resources of the Advanced Photon Source, a U.S. Department of Energy (DOE) Office of Science User Facility operated for the DOE Office of Science by Argonne National Laboratory under contract DE-AC02- 06CH11357.