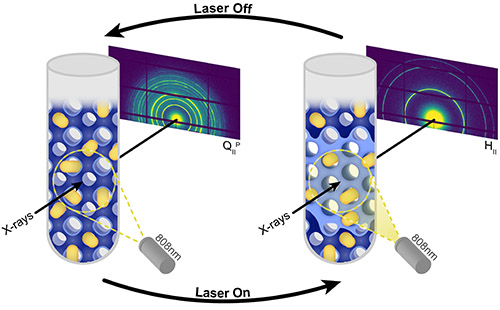 Scientists have shown that if tiny gold nanorods are incorporated in lipid lattices, near-infrared light (NIR) can be used to switch the structural properties of the lipids. The researchers say that their demonstrations of better controlled and reversible thermally induced, nanostructural transformations in lipid complexes could provide significant benefits for applications in targeted drug delivery. The results, based on research at the U.S. Department of Energy’s Advanced Photon Source (APS) were published in the journal ACS Applied Nano Materials.

Targeted drug delivery aims to concentrate a therapeutic agent at a particular site in the body, usually near diseased tissue. As well as improving efficacy, it could also reduce side-effects and the amount of medication required.

Targeted drug delivery is generally based around drug-loaded nanoparticles. The most common are lipid based. There are a few different ways to get these nanoparticles to release their payload in the correct part of the body. For instance, they can be coated in molecules that bond to certain cells, such as tumor cells, or be designed so that they dissolve in parts of the body with a specific pH (the quantitative measure of the acidity or basicity of aqueous or other liquid solutions). An energy source outside the body such as NIR, which can easily pass through most body tissue, can also be used to destroy the lipids when they reach their target.

Lipid complexes can form several different nanostructures. A newer idea is to use an external energy source to get lipid-based nanoparticles to undergo a phase change and switch from one structural form to another. This could be advantageous because different structures perform better during different parts of the drug delivery and release process. Hexagonal lipid complexes have been found to be more likely to fuse with and penetrate cell membranes than other structures, improving the release of the medication they are carrying into the target cells. But they are also more toxic to living cells elsewhere in the body. Cubic structures, on the other hand, are less toxic and can carry more of a therapeutic agent.

To induce a phase transition, energy must be transferred into the lipids. Researchers have had some success embedding gold nanorods in lipid nanoparticles: When targeted with NIR, the gold nanorods absorb the energy, vibrate, and heat up. This heating causes the structure of the lipid assembly to switch. Previous research has used gold nanorods that are around a quarter to half the size of the lipid nanoparticles, which are usually around 80-150 nanometers (nm) in diameter. This large relative size can make them challenging to incorporate into the lipid complexes and cause non-uniform heating.

Materials scientists and chemical engineers at the University of Illinois at Urbana-Champaign and the University of Minnesota decided to try and use much smaller gold nanorods. They hypothesised that these would be more precisely integrated into the structure of the lipid nanoparticles and would allow better control of the phase changes. The team produced tiny gold nanorods, approximately 6.6 nm in diameter and 20 nm in length and incorporated them in cubic lipid complexes. Theoretically, nanorods of this size are small enough to fit in the water nanochannels of lipid lattices. The team used the X-ray Science Division Chemical & Materials Science Group’s 12-ID-B and C beamlines at the Advanced Photon, an Office of Science user facility at Argonne National Laboratory, to probe the structure of the lipid-gold complexes and their response to NIR, using small-angle x-ray scattering.

X-ray analysis showed that the gold nanorods did colonize the water nanochannels of the lipid complexes, as the researchers hoped. The team also found that when irradiated with a NIR laser, lipid complexes in an aqueous solution transitioned from a cubic to a hexagonal structure in less than 100 seconds. Then, when the laser was switched off, the lipids rapidly phase changed again, reverting to their original cubic structure (Fig. 1). This process was repeatable. When the researchers subjected the lipids to repeated on-off cycles, with the laser on for 100 seconds and then off for one hundred seconds, the lipid complexes continued to switch between the two states.

Further experimental work showed that relatively low nanorod concentrations are required to achieve the heating-induced structural transformations. According to the researchers, the switching might even be easier in the human body as the difference between the body temperature and the transition temperature will be smaller than in their experiments.  ― Michael Allen

This work was supported by the National Institutes of Health under grant no. 1DP2EB024377-01 (J.R. and C.L.) and by National Science Foundation 1807330 (A.J. and M.K.M.). This research was carried out, in part, in the Materials Research Laboratory Central Research Facilities, University of Illinois. The authors also acknowledge the Minnesota Supercomputing Institute (MSI) (www.msi.umn.edu) at the University of Minnesota for providing computational resources to calculate the electron density maps shown in this manuscript. This research used resources of the Advanced Photon Source, a U.S. DOE Office of Science user facility operated for the DOE Office of Science by Argonne National Laboratory under Contract No. DE-AC02-06CH11357.