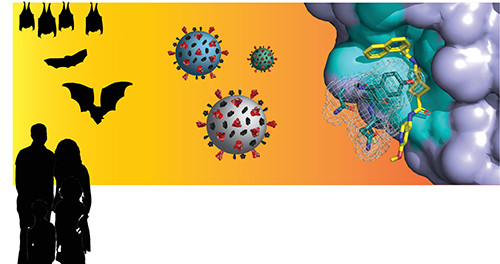 Coronaviruses pass from animals to humans causing disease outbreaks including the COVID-19 pandemic. In a recent study, researchers used a variety of techniques, including x-ray diffraction data collected at the U.S. Department of Energy’s Advanced Photon Source (APS), to explore the development of compounds that can inhibit a group of coronaviruses called subgroup 2. This work, published in the journal ACS Infectious Diseases, may lead to the development of new antiviral drugs that can be used to combat the current pandemic and future coronavirus outbreaks.

The virus responsible for the COVID-19 pandemic (severe acute respiratory syndrome coronavirus 2 or SARS-CoV-2) and the virus that caused the 2003 SARS outbreak (SARS-CoV-1) are both members of a group of over 30 coronaviruses found in humans and other animals known as subgroup 2b coronaviruses. Previous studies have shown that alteration to these viruses’ spike protein can result in cross-over from animal hosts to humans (Fig.1). With SARS-CoV-1 and 2 demonstrating how readily this can happen in nature to cause severe disease outbreaks, there is a high possibility that other viruses from the subgroup 2b families might end up becoming dangerous human pathogens as well.

While vaccines have proven vital in controlling outbreaks, including COVID-19, they also have limitations, particularly for immunocompromised people. Thus, the development of antiviral drugs is crucial for expanding our ability to respond to coronavirus outbreaks.

One way to develop antiviral drugs is to find compounds that block the activity of a particular component of a virus. Subgroup 2 coronaviruses contain an enzyme called papain-like protease (or PLpro) that facilitates an early step of the virus’s effort to replicate its genome. Additionally, the protease suppresses the immune system’s ability to attack and dismantle virus proteins. PLpro does this by targeting two cellular processes called ubiquitination and ISGylation.

A team of researchers from the University of Georgia and the University of California, Riverside, characterized features of PLpros from subgroup 2b coronaviruses and used these features to design 30 novel subgroup 2b PLpro inhibitors. PLpros are quite similar across different subgroup 2b viruses, but there are some differences. Because the goal was to develop PLpro inhibitors that will work against many, if not all, subgroup 2b viruses, the researchers included a virus called BtSCoV-Rf1.2004, which is more distantly related to other subgroup 2 viruses, in their experiments along with CoV-1 and CoV-2.

The research team used the 17-ID (AMX) beamline at the National Synchrotron Light Source II (NSLS II) at Brookhaven National Laboratory to create a crystal structure of BtSCoV-Rf1.2004 PLpro in complex with GRL0617, a drug-like compound previously designed to inhibit the CoV-1/2 PLpro. Despite some structural differences between BtSCoV-Rf1.2004 and previously determined PLpros from CoV-1/2, the three-dimensional structure of the three PLpros’ substrate binding and active sites were very similar. Importantly, the interactions between the different PLpros and GL0617 were also similar, providing evidence that it may be possible to design a compound that targets multiple PLpros from the subgroup 2b coronavirus family.

To further explore this possibility, the researchers synthesized 30 new compounds based on the design of existing compounds known to inhibit the CoV-1 PLpro. They then tested how well these compounds were able to inhibit the CoV-1, CoV-2, and BtSCoV-Rf1.2004 PLpros. These experiments showed that several of the compounds successfully inhibited all three PLpros and a handful were particularly potent inhibitors.

The team then collected structural data of one of these promising compounds, 37, in complex with the BtSCoV-Rf1.2004 PLpro using an Eiger-16 M detector at the Southeast Regional Collaborative Access Team (SER-CAT) 22-ID x-ray beamline at the Argonne National Laboratory APS. Compound 37 represented a new type of PLpro inhibitor by containing a spiroazetidine group that—although increasingly used—had never been observed by x-ray crystallography. Thus, this structural work at SER-CAT gave them more information about how compounds with a similar structure to 37 are likely to bind to the BtSCoV-Rf1.2004 PLpro and other subgroup 2b PLpros.

To determine which compounds showed the most potential for further development, the team tested the stability of the 30 different inhibitor compounds as well as their toxicity to cells infected with CoV-1 and Cov-2.

While further refinement and testing of these compounds is needed, these results suggest that PLpro inhibitors could be promising future therapeutics for treating outbreaks caused by subgroup 2b coronaviruses.  ― Summer Allen