Future Catalytic Converters Could Give More Bang for Your Buck 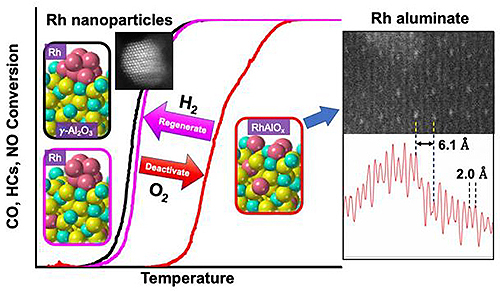 The next generation of catalytic converters may last longer and require fewer rare materials to operate, a new study suggests. Catalytic converters convert harmful gases in car exhaust, including carbon monoxide and other pollutants, into steam and other safer byproducts, such as carbon dioxide and nitrogen. A study by scientists from The Ohio State University and Ford Motor Company Research and Advanced Engineering employed a variety of research techniques, including extended x-ray absorption fine structure (EXAFS) spectroscopy at the U.S. Department of Energy’s Advanced Photon Source (APS), to identify the microstructures of rhodium aluminate (an inactive compound in catalytic converters) resulting from exposure to the extreme heat generated by these ubiquitous automotive components. The results of this study concluded that establishing a new design that prevents the formation of rhodium aluminate could help get the most out of these devices in the long run. This in-depth understanding of the device structure can also help inform better designs for future catalytic converters.

A good catalytic converter can last for more than a decade, but according to Cheng-Han Li, lead author of a study published in the journal Chemistry of Materials, there’s always room for improvement. He said future catalytic technologies could be designed to effectively scrub pollutants for a longer period of time. “We want to have a better lifetime for catalytic converters. Otherwise, they will have to be replaced or won't pass the government’s emission tests,” said Li, who is a doctoral student in materials science and engineering at The Ohio State University.

Depending on where you live, federal emission standards can vary. In 1975, to combat the growing smog problem in cities across the United States, Congress passed legislation stating that all vehicles were required to have catalytic converters.

Although there are various types, modern catalytic converters use a combination of three precious metals: palladium, platinum, and rhodium. These three-way catalysts can reduce nitric oxide (NO) and nitrogen dioxide (NO2) emissions – two substances which if put together, can create NOx, a chemical compound that has both direct and indirect harmful effects on human health.

Rising prices for the three precious metals–especially rhodium–are why criminals all over have resorted to stealing catalytic converters. Found most often in the river sands of North and South America, rhodium is considered the rarest element in the world and is more valuable than gold and platinum.

“The cost of rhodium has risen dramatically over the past years due to increasing demand coupled with a fundamental supply deficit,” says Li. That means catalytic converters can be expensive to make, and doubly expensive to replace.

And since rhodium-based catalysts are in short supply, it’s imperative that they be utilized as effectively as possible. Because the catalysts have been known to deactivate at high temperatures, these researchers investigated how their performance changes over time in the presence of high heat.

To do this, Li’s team performed several tests on the converters, including having them endure temperatures higher than 1600 degrees Fahrenheit. While real catalysts rarely encounter such conditions in a running car, they may experience those temperatures at least occasionally over their lifetimes, especially as the converter ages.

Researchers used a transmission electron microscope to study the microstructures of three-way catalysts at the atomic level and how they were affected by high temperatures.

The in situ EXAFS study used high-brightness x-rays from the APS to reveal oxidation states and local coordination under reaction conditions. The experiments were conducted at the Materials Research Collaborative Access Team’s 10-BM and 10-ID x-ray stations at the APS (the APS is an Office of Science user facility at Argonne National Laboratory). “With this local structural probe, we can make the connection between high heat, the converter’s real performance, and its microstructure,” said Li.

Li noted that rhodium catalysts are supported by oxides like alumina and ceria-zirconia, which help stabilize them. At high heat with oxygen, rhodium dissolves into the alumina and degrades into the stable compound–rhodium aluminate (RhAlOx). This compound, however, is chemically inactive, meaning that it can't scrub away harmful pollutants and gases, making the device effectively useless.

But it is reversible.

When exposed to hydrogen some of the rhodium becomes active again, but not nearly enough to return the catalyst converter to its former efficiency.

“Our results give car manufacturers a specific direction to follow to optimize the use of rhodium-based catalysts,” said Li.

This work has been supported by a research grant from Ford Motor Company through the Ford−Ohio State University Alliance Program. This research used resources of the Materials Research Collaborative Access Team (MR-CAT), whose operations are supported by the U.S. Department of Energy (DOE) and the MR-CAT member institutions. Electron microscopy was performed at the Center for Electron Microscopy and Analysis (CEMAS) at The Ohio State University. This research used resources of the Advanced Photon Source, an Office of Science User Facility operated for the U.S. DOE Office of Science by Argonne National Laboratory.