Magnetic-like Vortices and Cycloids Observed in a Ferroelectric Material 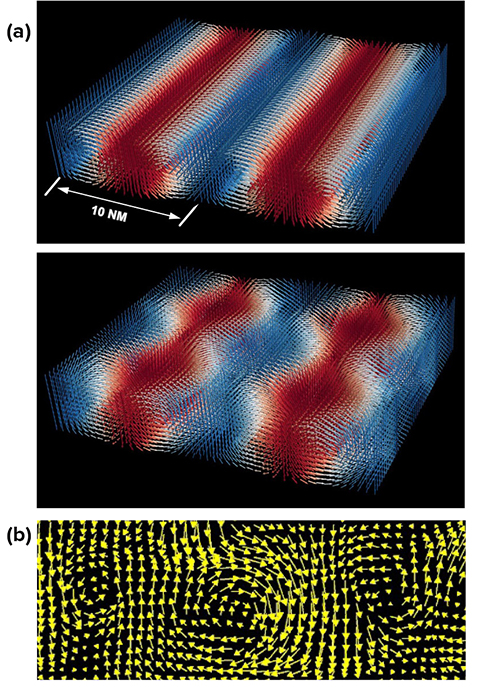 Under the right conditions, some ferromagnetic compounds can generate magnetic whirlpools, spirals, and other complex patterns. A special type of magnetic whirlpool is known as a skyrmion. These peculiar entities are currently the subject of intense research as they hold substantial promise for improved electronic devices. In contrast to ferromagnetic materials, which are classified by their particular patterns of internal magnetic fields, ferroelectric compounds exhibit an internal electric polarization. Although the mechanisms behind ferromagnetic and ferroelectric behavior are quite different, ferroelectric materials can also sometimes support whirlpool-like patterns, albeit consisting of internal electric field texture instead of magnetic ones. Now for the first time, researchers have observed electric dipole patterns in a thin-film ferroelectric material that are reminiscent of the complex patterns of magnetic skyrmions. The complex electric dipole patterns were detected using a variety of methods, including transmission electron microscopy (TEM) and atomic force microscopy (AFM). The ferroelectric pattern was further investigated using x-ray circular dichroism (CD) measurements performed at the U.S. Department of Energy’s (DOE’s) Advanced Photon Source (APS) and at the Diamond Light Source (England). These experimental results, published in the journal Nature, constitute a major advance in identifying a complex electronic response at the nanoscale that can exist in both ferroelectric and ferromagnetic materials.

Iron is a familiar ferromagnetic material. Near a magnet, the individual magnetic dipoles of iron will align, like little arrows, to the magnet's field. By contrast, the molecular dipoles in an antiferromagnetic material will align opposite to their closest neighbors, resulting in an overall zero magnetic field. Besides these relatively simple magnetic patterns, scientists have identified a variety of complex structures such as magnetic whirlpools, or vortices.

A particularly interesting pattern is displayed by skyrmions. These vortex-like magnetic structures exhibit a three-dimensional form. At the periphery of the vortex individual dipoles point upward like the pegs on a roulette wheel. Between the vortex's rim and center, the magnetic dipoles whirl around in the same direction, mostly in the same plane, while the dipoles nearest the center point downwards.

Skyrmions are persistent magnetic quasi-particles that arise due to the spin-orbit coupling (SOC) within a compound. The SOC results from the interplay between the spins of a compound's electrons and their motions within the compound's atoms. The effects of spin-orbit coupling on the interaction and related texture of magnetic dipoles is rooted in the Dzyaloshinskii–Moriya interaction (abbreviated DMi). Because skyrmions are so persistent and easily manipulated by tiny electric or magnetic fields, they are considered prime candidates for advanced computer memory devices and processors.

Vortex-like patterns have also been observed in ferroelectric materials. Ferroelectrics can exhibit permanent electrical polarization, which naturally occurs in many compounds. For instance, a water molecule (H2O) naturally forms a shallow “V” shape, with two negatively charged hydrogen atoms on one side and a positively charged oxygen atom on the other. This charge separation produces an electric dipole. Crystalline materials composed of electrically polarized molecules typically generate an internal electric field within ferroelectric domains.

The researchers in this study looked to discover complex patterns of electric dipoles in a ferroelectric compound similar to complex magnetic patterns found in some ferromagnetic materials. Guided by previous experiments and sophisticated computer simulations, the team created a thin-film material consisting of a single layer of lead titanate (PbTiO3), which is ferroelectric, situated between layers of strontium ruthenate (SrRuO3). This thin-layer material is designated PTO/SRO. Scanning transmission electron microscopy (STEM) mapped the two-dimensional projection of polarization patterns within the single layer of PTO (lead titanate), revealing a two-dimensional array of electric dipole vortices.

The polarized PTO layer is also ordered along the third dimension, yielding a kind of corkscrew pattern that is modulated in two orthogonal directions. Two corkscrew-like patterns were possible, either helical or cycloidal. Circular dichroism studies were performed at the X-ray Science Division Magnetic Materials Group’s 4-ID-D x-ray beamline at the APS, a DOE Office of Science user facility at Argonne National Laboratory. They revealed that the doubly modulated polarization pattern within the PTO layer was cycloidal (Fig. 1, middle). Such doubly ordered polarization has not previously been observed in ferroelectric materials. It has been proposed that such complex polarization patterns are driven by a mechanism similar to the Dzyaloshinskii–Moriya interaction in magnetic materials. This research is the first to directly confirm that an electric analog of the magnetic DMi interaction must exist. Diffraction studies of the sample were carried out at the I16 beamline of the Diamond Light Source. Scanning transmission electron microscopy (STEM) mapped the polarization patterns within the single layer of PTO (lead titanate), revealing the two-dimensional projection of the array of electric dipole vortices (Fig. 1, bottom).

The ability to probe nanoscale electronic texture with x-rays will see a major boost once the upgrade of the Advanced Photon Source (APS-U) is completed. Within it, featured beamline POLAR will exploit the enhanced coherence of APS-U in resonant dichroic coherent diffraction imaging measurements to reconstruct 3D nanoscale polar and magnetic nanostructures with elemental specificity.

The experimental results provide definitive evidence that ferromagnetic and ferroelectric materials can support quite similar complex orderings. In particular, the observation of a doubly ordered polarization in the STO/PTO thin film, in which a vortex is stretched into a cycloidal pattern, brings scientists closer to realizing ferroelectric skyrmions and other complex topologies in such materials. Furthermore, because the strontium ruthenate (SRO) layers are metallic, it should prove much easier to incorporate such films into electronic systems. ― Philip Koth

This work was partly supported by the EPSRC (UK) through grant nos. EP/ P031544/1 and EP/P025803/1. M.A. acknowledges the Theo Murphy Blue Skies Award of the Royal Society. We also acknowledge the technical support from M. Crosbie. We would like to acknowledge the University of Warwick Research Technology Platform for assistance in the research described in this paper. This research used resources of the Advanced Photon Source, a U.S. Department of Energy (DOE) Office of Science user facility, operated for the DOE Office of Science by Argonne National Laboratory under contract no. DE-AC02-06CH11357.