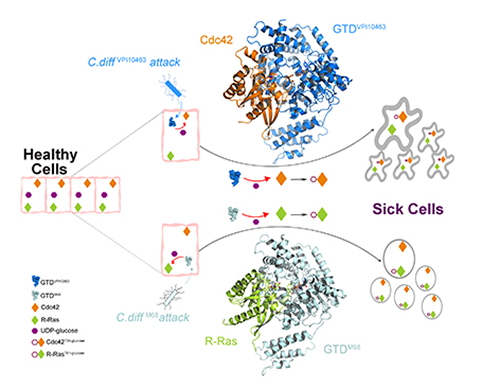 The original University of California, Irvine press release can be read here.

A University of California, Irvine (UCI)-led study suggests that the glucosyltransferase domain (GTD) is an ideal molecular target for therapeutic interventions for Clostridioides difficile infection (CDI). Based on their findings that established the structural basis for Toxin B recognition of the small GTPases Rho and R-Ras families, the study, which used data obtained at the U.S. Department of Energy’s (DOE’s) Advanced Photon Source and was published in Science Advances, may lead to new treatments to fight this deadly disease.

CDI is the leading cause of antibiotic-associated diarrhea and gastroenteritis-associated deaths worldwide, accounting for 500,000 cases and 29,000 deaths annually in the U.S. Classified by the Centers for Disease Control and Prevention as one of the top health threats, there is growing global concern surrounding the emerge and spread of hypervirulent C. difficile strains, resembling the occurrence of new virus variants in the current COVID pandemic. TcdB is one of two homologous C. difficile exotoxins, and TcdB alone is capable of causing the full spectrum of CDI diseases.

“We focused on the structure and function of TcdB’s crucial GTD, which is the toxin’s ‘warhead.’ The GTD is delivered by the toxin inside the host cells and causes most of the cytosolic damage to patients,” said Rongsheng Jin, professor in the Department of Physiology & Biophysics at the UCI School of Medicine, and corresponding author. “We discovered molecular mechanisms by which the GTD specifically recognizes and blocks the physiological functions of the human GTPases Rho and R-Ras enzyme families that are crucial signaling molecules.” To determine the structure of GTD, the team collected x-ray diffraction data at the Northeastern Collaborative Access Team (NE-CAT) beamline 24-ID-C of the Advanced Photon Source at Argonne National Laboratory.

The team also demonstrated how the classic form of TcdB and the hypervirulent TcdB recognize their human targets in different ways, which leads to distinct structural changes to the host cells caused by bacterial invasion.

“Once the GTD of TcdB is inside the cells, it is shielded by our cells and becomes inaccessible to passive immunotherapy. But our studies suggest that small molecule inhibitors could be developed to disarm the GTD, which will directly eliminate the root cause of disease symptoms and cellular damage,” Jin said. “This new strategy can potentially be integrated with and complement other CDI treatment regiments.”