A Simple Switch in Lanthanide Separations 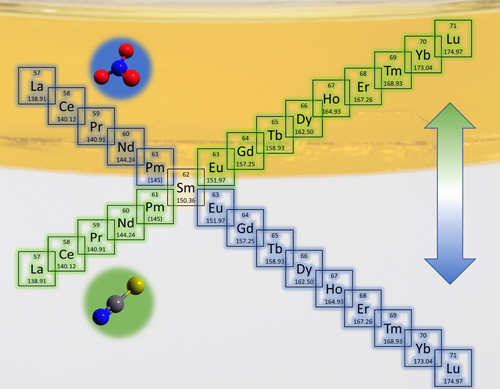 Rare earths are a set of 17 elements, 15 lanthanides plus yttrium and scandium, which have an outsized importance in several industrial sectors, notably as catalysts in the refining of crude oil into gasoline products. These metals have also been widely used as alloys to impart strength and hardness to other metals. More recently, the demand for lanthanide elements has been rising due to their use in other industrial applications, such as permanent magnets used in electric vehicles and wind turbines. All these applications have driven research into the efficient separation of lanthanides from their mixtures. The main technological barrier in obtaining lanthanides is chemically separating individual rare-earth elements from each other. Solvent extraction has been the preeminent industrial process for the separation of lanthanides, but its mechanisms are not clearly understood. In this study, published in the journal Nanoscale, researchers used small angle x-ray scattering (SAXS) at the U.S. Department of Energy’s Advanced Photon Source (APS) to investigate the correlation between extraction performance and the structure of the complex fluids and interfaces involved in extraction. Their results can be used to more efficiently extract the desired lanthanides.

In solvent extraction (the separation of compounds or metal complexes, based on their relative solubilities in two different immiscible liquids, usually water (aqueous phase) and an organic solvent (organic phase) metal ions (such as lanthanide ions) are transferred from an aqueous phase into an organic phase with the help of extractant molecules, which are typically amphiphilic molecules. These extractants can form discrete complexes with the lanthanide, which then aggregate in the organic phase. While supramolecular interactions in this complex fluid are known to influence the solvent extraction process, the exact link between solvent extraction and the organic phase’s composition and structure is unknown.

Following extraction, the extracting organic phase is a complex fluid containing non-polar organic solvents, amphiphilic ​extractants, and the extracted species such as metal ions, co-ions, and water. The interactions between these components and their structural organization determine the selectivity and partition (“distribution ratio”) of the extraction process. Small angle x-ray scattering has been the primary method for characterizing the nanostructure of the organic phase following solvent extraction.

Using the X-ray Science Division (XSD) Chemical & Materials Science Group’s beamline 12-ID-C at the APS, researchers from Argonne National Laboratory performed SAXS experiments to determine the qualitative differences between the clustering behavior of metal–amphiphile aggregates in the presence of either nitrate (NO3−) or thiocyanate (SCN−) background anions in the aqueous phase. The experiments revealed that the nature of the anion has a significant impact on the interactions between the aggregates and their clustering behavior in the complex fluid, which eventually determines whether heavier or lighter lanthanides are more likely to be extracted. The researchers’ observations indicate that it is possible to selectively transport light or heavy lanthanides from the aqueous phase into the organic phase by simply choosing NO3− or SCN− as the background anion, respectively (Fig. 1).

While the organic phase containing NO3− always shows clustering, indicating the presence of stronger attractive interactions between metal-amphiphile aggregates, SCN− shows clustering as a function of the metal loading. These qualitative differences suggest that the extraction efficiency is driven by the aqueous phase conditions in NO3− solutions, while it is driven by the organic phase structuring in SCN− solutions.

Finally, the researchers adapted a model characterizing the clustering that accounts for interactions among the aggregates and used the model to interpret the SAXS results. The new model, which can incorporate absolute scattering intensities and provide high quality fits with reasonable physical parameters under all conditions, successfully described the nanoscale structure of the complex fluid and helped in understanding the mechanisms responsible for amphiphile-assisted ion transport between immiscible liquids.