Bromine is Not Useful as Paleo-Diet Indicator 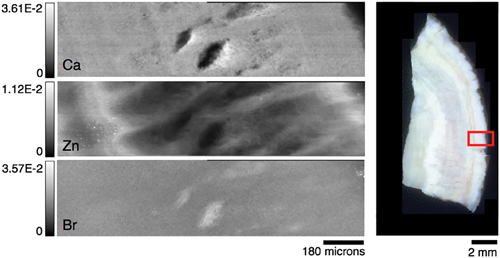 Human diets are determined by both environmental and social considerations. People eat what is available, what they are technologically able to obtain, and what their social group considers to be appropriate. One tool to identify the dietary choices of ancient people is the chemical composition of recovered human skeletal tissue. Researchers using high-brightness x-rays from the U.S. Department of Energy’s Advanced Photon Source analyzed bromine in human bones and teeth excavated from Pre-Columbian archeological sites and found that bromine concentrations were close to the lower detection limit, suggesting that bromine is not a good indicator of paleo-human diet. The results were published in the journal Archaeometry.

Organic bromine forms by biological processes while inorganic bromine forms by diagenesis. For example, organic Br is a trace element in collagen IV scaffolds, which make up 90% of the organic portion of teeth. Since the concentration of bromine in seawater is several orders of magnitude higher than in freshwater or crustal materials, the researchers in this study from the Canadian Nuclear Laboratories and The University of Western Ontario (Canada) hypothesized that elevated bromine in human tissue could indicate a diet rich in seafood proteins. Indeed, a large number of naturally occurring organobromide compounds are the metabolites of marine organisms. In nearshore environments, the presence of organobromides identifies marine aerosols and organic sediments.

In a previous study, these researchers evaluated the bromine concentration and dietary source in bony tissue samples. The organic and inorganic components were separated and then analyzed using synchrotron micro-x-ray fluorescence (XRF). The researchers mapped element gradients and showed the presence of organobromine. They hypothesized that elevated bromine reveals the consumption of protein from marine sources, as suggested by isotopic analysis, and called for further research to determine if the Br levels can indicate a marine diet or a terrestrial diet with proximity to marine sources.

For this work, the researchers determined the Br distribution in teeth and bone samples of several marine mammal species, which of course have an entirely marine diet. Next, they analyzed human skeletal tissue for the presence of organic bromine to try to identify the presence of marine components of a paleo diet. For an element to reflect paleodiet, it must be measurable, directly reflect diet, develop a trophic-level separation, imitate the movement and activity of an essential nutrient, and have low ionic mobility.

To do this, the researchers employed synchrotron radiation, including XRF microscopy, micro-confocal XRF microscopy, and x-ray absorption near edge structure (XANES) spectroscopy. Using the X-ray Science Division Spectroscopy Group’s 20-ID-C beamline of the APS (an Office of Science user facility at Argonne National Laboratory) they mapped individual element distributions along the samples’ anatomy (Fig. 1). From this, they differentiated biogenic and diagenetic signals to expose how the elements became incorporated into the tissue.

The XANES results revealed the chemical state of the Br in the samples and showed that most of the bromine was incorporated in the organic component of the human bones. In addition, the samples were enriched in bromine in the cementum and osteons; organobromine suggests an organic component. The results show relative, rather than absolute, element distributions within individual samples.

The concentrations of bromine in marine mammals compared with humans were very low, close to the detection limits. This suggests that Br in human bones does not indicate a marine diet, although it is possible that bromine is rich in other tissues.

Although Br appears to play a role in collagen formation, its presence in paleo-human bones and teeth does not indicate the consumption of marine mammals. To be certain, collagen would need to be measured independently. This study suggests that bromine is a poor choice as a dietary indicator.

After the APS upgrade, similar microprobe studies will be greatly enhanced in sensitivity and resolution. — Dana Desonie

This research used resources of the Advanced Photon Source, a U.S. DOE Office of Science User Facility operated for the DOE Office of Science by Argonne National Laboratory under contract no. DE-AC02-06CH11357, and the Canadian Light Source and its funding partners for the use of beamline 20-ID.