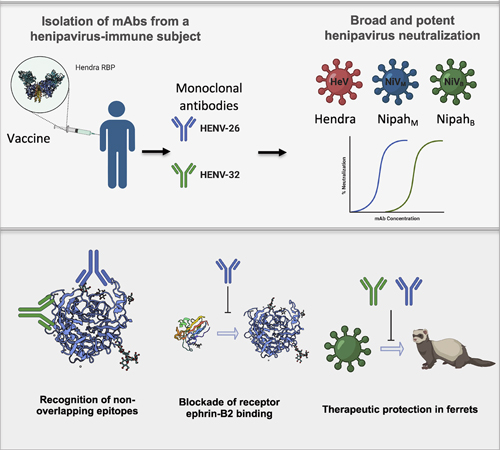 Hendra and Nipah henipaviruses are emerging pathogens that cause high fatality rates as they spread from animals to humans. There are currently no drugs or vaccines targeting these viruses. To that end, an international team of scientists developed monoclonal antibodies targeting the henipavirus and made crystal structures of two of the most potent antibodies using the U.S. Department of Energy’s Advanced Photon Source (APS). The structures show that the two antibodies recognize diverse sites on the viruses’ receptor-binding proteins and neutralize the viruses in different ways. When administered to animals that had been infected with a highly lethal strain of the Nipah virus, the antibodies protected the animals from severe disease and death. These results, published in the journal Cell, suggest that monoclonal antibodies HENV-26 and HENV-32 can be used cooperatively as a therapeutic “cocktail” against the henipavirus, while the crystal structures can be used to design effective vaccines.

Two new, highly lethal viruses are emerging throughout Southeast Asia, with potential to create an epidemic among humans and animals.  The Hendra virus originates in large fruit bats and can spread to humans via horses that consume contaminated food. The virus can cause meningitis, inflammation of the brain, convulsions, coma, or death. The Nipah virus also originates in fruit bats. It is passed to humans via a wide range of infected animals, contaminated food, or directly from another human. It can cause acute respiratory illness, encephalitis, and death.

There are currently no treatments or vaccines that target either virus or their many strains. Meanwhile, climate change and habitat loss multiply the possibility of transmission by increasing contact between wild and domesticated animals and humans.  The World Health Organization lists the Nipah virus as an epidemic threat requiring urgent research and development.

Responding to the threat, an international team of scientists obtained blood cells from a man who had been occupationally exposed to an equine vaccine.  The vaccine contained a recombinant form of the receptor-binding protein of the Hendra virus and stimulated production of anti-Hendra antibodies. The scientists isolated B cells secreting the antibodies to obtain fully human monoclonal antibodies (mAbs) against the Hendra and Nipah head domain receptor-binding protein—one of two proteins on the topmost surface of the virus that enable it to attach to host cells.

The researchers tested the mAbs for a variety of functions: their ability to bind to the viruses in vitro and in mammalian cells; how well they neutralized the viruses in vitro; which sites they recognized and whether they competed with a human receptor protein for a binding site.

The scientists chose the two most potent and cross-reactive mAbs—HENV-26 and HENV-32—to make crystal structures. Using the Life Sciences Collaborative Access Team beamline 21-ID-G at the APS, they solved the structures of HENV-26 bound to Hendra and Nipah receptor-binding protein head domains at 2.60 Å or 3.40 Å, respectively, and HENV-32 bound to Hendra receptor-binding protein head domain at a resolution of 2.0 Å. (The APS is an Office of Science user facility at Argonne National Laboratory.)

The crystal structures showed that HENV-26 and HENV-32 neutralize the viruses in different ways. Specifically, HENV-26 protects the host from infection by inhibiting viral entry, directly competing with human ephrinB2 protein, the receptor on human host cells, for the viruses’ receptor binding sites. HENV-32 does not. The mAbs recognize diverse sites on the henipavirus receptor-binding protein and produce different conformational changes, based on the structural elements of the interacting molecules, the atomic configurations and bonding events in the antibody-antigen interface, and movement upon binding.

The scientists also tested the ability of HENV-26 and HENV-32 to act as therapeutic agents in animal models. They infected ferrets with a lethal strain of the Nipah virus, then administered the mAbs three and five days later. Both mAbs reduced disease and protected the animals from death (Fig. 1).

The differences in the ways the two mAbs react to the viruses are significant in terms of drug development; differences in binding sites and mechanism mean that HENV-26 and HENV-32 can be used together to create a “cocktail” that prevents the virus from escaping the host’s immune response. Moreover, the antibody-antigen interactions revealed in the crystal structures can help scientists engineer monoclonal antibodies with improved binding ability. Together, these findings advance the groundwork for the development of effective—and much-needed—therapeutics against henipaviruses.

In sum, the authors have identified potently neutralizing antibodies to various epitopes on the virus surface protein that can be considered as therapeutic candidates. Antibodies could be used for prevention or for treatment of Hendra or Nipah virus infection. They did not necessarily expect to find antibodies that would be active against all of the medically important henipavirus strains, which include Hendra virus, and both the Malaysia and Bangladesh strains of Nipah virus. Finding antibodies that were this broadly cross reactive was exciting, because these antibodies could be developed as a single antibody or cocktail that will be pertinent for multiple virus infections.

The authors continue to conduct antibody discovery efforts for these viruses and have found new antibodies that are even more potent. Furthermore, they have demonstrated that combinations of these antibodies synergize for neutralization. That is to say, they cooperate in a way in which the cocktail is not just additive in its effect but delivers a synergistic enhancement of antiviral function. That is a very exciting new development and the authors expect to be working at the APS to determine additional structures that elucidate the basis for this in the near future. There is more to come on this.  — Judy Myers

This work was supported by a grant from the National Institutes of Health (NIH) U19 AI142764 and departmental funds from UTMB to Thomas Geisbert. M.P.D. was supported by NIH fellowship grant F31 AI152332. The project described was supported by CTSA award no. UL1 TR002243 from the National Center for Advancing Translational Sciences (NCATS). Use of the LS-CAT Sector 21 was supported by the Michigan Economic Development Corporation and the Michigan Technology Tri- Corridor (grant 085P1000817). Support for crystallography was provided from the Vanderbilt Center for Structural Biology. This research used resources of the Advanced Photon Source, a U.S. DOE Office of Science User Facility operated for the DOE Office of Science by Argonne National Laboratory under contract no. DE-AC02-06CH11357.