Stop the Repair, Stop the Cancer 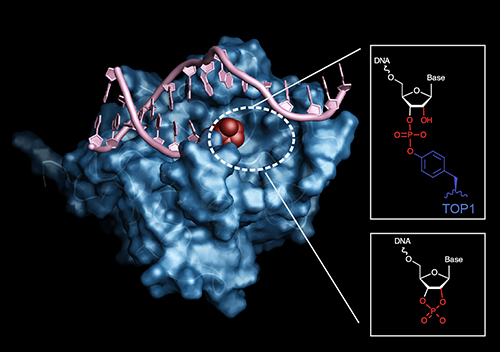 The complex lengths to which many cells will go to replicate themselves is truly astounding. There is an intricate web of DNA repair mechanisms that help keep the cell running and dividing, and scientists continue to discover new threads in the tangle. A key motivation to studying DNA repair mechanisms is the possibility for developing new cancer therapeutics, as kinks in the DNA repair chain often portend uncontrolled growth. But then again, blocking DNA repair may be a useful strategy for targeting cancer cells. Using a slew of biochemical studies as well as a structural model of the catalytic domain of a previously mysterious repair protein called the APE2 nuclease—created using the U.S. Department of Energy’s Advanced Photon Source (APS)—researchers discovered a new vulnerability for certain tumor cells. APE2 reverses DNA 3’ blocks, lesions that preclude DNA synthesis and appear lethal to cells with cancer-causing BRCA 1 and 2 mutations, thereby allowing these cancer cells to divide. The findings, published in the journal Molecular Cell, suggest that drugs that inhibit APE2 could represent a new type of cancer treatment.

Mutations in the genes that code for two DNA repair proteins—BRCA1 and BRCA2—are well known triggers of breast cancer, among other cancers. BRCA1/2 are tumor suppressor proteins, repairing those bits of DNA that, left unrepaired, would lead cells to divide uncontrolled and form tumors. Specifically, BRCA1/2 repair DNA through a process called homologous recombination. The mutations hinder this repair process, but the cells are viable, nonetheless, likely due to backup repair strategies. Previous research found that the loss of the gene for APE2 caused cells with cancer-causing BRCA1/2 mutations to die. But scientists weren’t sure what APE2 was doing so save these cells. One clue was the APE2 is related to APE1, a nuclease that repairs DNA by removing errant bases. Another major finding was that blocking APE2 with a single guide RNA in multiple different cell lines caused the cells to be sensitive to an inhibitor of a protein that senses DNA lesions and triggers DNA repair, suggesting that APE2 somehow targets such lesions.

Through genetic interaction mapping, the researchers began to suspect that APE2 repaired endogenous sources of DNA damage, as opposed to exogenous sources. A series of competitive growth assays further narrowed down the possible APE2 targets to those related to genomic ribonucleotide processing. Ultimately, the researchers homed in on a type of DNA lesion called a 3’ block—a topoisomerase-induced break in one strand of a DNA double strand that creates an extra 3’ end in the middle with a ribonucleotide cap, preventing replication. In vitro studies confirmed the capacity of APE2 to excise these blocks to allow replication to proceed.

To get a more detailed picture of how APE2 works, the researchers solved the structure of the nuclease’s catalytic domain. Using data collected at the Southeast Regional Collaborative Access Team 22-ID beamline at the Argonne National Laboratory APS they determined a 1.54-angstrom-resolution structure for the domain (Fig. 1). The structure revealed the presumed catalytic base, a nucleophilic aspartic acid at position 183 near the DNA binding cleft. The structure is consistent with APE2’s role in 3’ block reversal, as its generous DNA binding cleft could easily accommodate a broad range of substrates.

Overall, the finding suggests the cell employs a two-tiered system for dealing with 3’ blocks. The cell would want to invest heavily in this problem, as a free 3’ hydroxyl end of DNA is essential for DNA synthesis reactions, including replication, repair, and recombination. The first tier of the system, which does not involve APE2, focuses on the prevention of 3’ blocks using a host of lesion-specific enzymes. The second tier, a failsafe should prevention efforts fail, involves APE2 removing the 3’ block and restoring an extendible DNA end.  Together, this suggests that drug therapies that target APE2 could acts as powerful antitumor treatments for those with some breast cancers, or any tumor cell deficient in homologous recombination.  — Erika Gebel Berg

A.A.-Q. is a recipient of a long-term EMBO fellowship, D.S. was supported by a CIHR fellowship, and S.A. was a Banting postdoctoral fellow. Research in the R.S.W. laboratory was supported by National Institutes of Health Intramural Program, National Institute of Environmental Health Sciences (NIEHS) 1Z01ES102765. We thank L. Pedersen of the NIEHS Collaborative crystallography group for data collection support. SER-CAT is supported by its member institution equipment grants (S10_RR25528 and S10_RR028976) from the National Institutes of Health. D.D. is a Canada Research Chair (Tier I), and work in the D.D. lab was supported by grants from the CIHR (FDN143343) and Canadian Cancer Society (705644) with additional support from the Krembil Foundation and Repare Therapeutics. This research used resources of the Advanced Photon Source, a U.S. DOE Office of Science User Facility operated for the DOE Office of Science by Argonne National Laboratory under Contract No. DE-AC02-06CH11357.