Making the Most of Metal 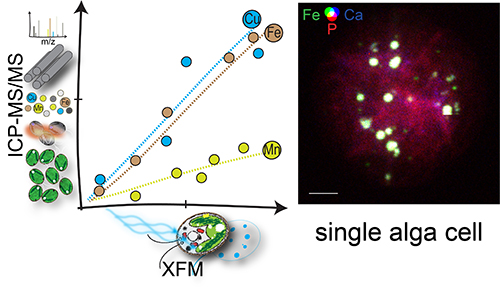 Earth’s inhabitants are described as carbon-based life forms, yet we wouldn’t amount to much without metal. Trace metals in particular play critical roles in the all-important redox chemistry that enables Earth dwellers to turn solar rays and food into energy. The importance of metals in biology is made obvious by the elaborate mechanisms organisms use to regulate metal acquisition, storage, and usage. In a recent study, researchers took a close look at how a photosynthetic microbe—the eukaryotic green alga Chlamydomonas reinhardtii—manages its metal resources. Using the U.S. Department of Energy’s Advanced Photon Source (APS) they unraveled the complex strategy the organism employs to deal with times of metal feast and metal famine.

Trace metals—such as iron, copper, manganese, and zinc—have multiple jobs in life processes. For example, they provide structural support to biomolecules. They also facilitate catalysis in approximately 40% of enzymes. But not just any metal will do. Enzymes typically require specific metal cofactors to function properly. Mismetalation (incorrect metallation of enzymes) can harm the cell; therefore, the cell is heavily invested in avoiding that outcome.

One strategy cells use to get the right metal for the job is to compartmentalize trace metals, which locally adjusts the concentration of metals in the cell to influence the biomolecule to which a particular metal will bind. Storage sites that sequester particular trace metals include organelles called acidocalcisomes, which, as their name suggests, are acidic and high in calcium. These organelles, found in the cytoplasm of most eukaryotes, are easy to see in whole cells by x-ray fluorescence microscopy (XFM) thanks to their unique elemental signature. In this technique, x-rays are directed at a cell to stimulate the release of photons with energies that reveal the identities of elements within the cell, creating a map of cellular contents. High-energy x-rays, like those produced at the APS, an Office of Science user facility at Argonne National Laboratory) penetrate deep within cells, allowing researchers to image whole cells without destroying them (Fig. 1).

In Chlamydomonas, which is a common reference organism, deficiency of a particular trace metal reduces growth rate, and encourages the cells to uptake alternate metals, often more than the cell can handle safely. These excess micronutrients can be stored for later, when perhaps the metal is suddenly in short supply. A previous study demonstrated that when Chlamydomonas is deprived of zinc, its acidocalcisomes begin to store excess amounts of other trace metals.

In situations where Chlamydomonas encounters excess iron or manganese in its environment, the researchers in this study suspected that the role of the acidocalcisome may be to sequester this bounty to prevent the cytoplasm from being overloaded with the metal, a situation that can lead to cell damage or mismetalation. To test this hypothesis, they subjected Chlamydomonas cells to excess iron, then measured how much of the iron ended up in acidocalcisomes using XFM at the Bionanoprobe in four sessions over a two-year period, first at the Life Sciences Collaborative Access Team (LS-CAT) 21-ID-D x-ray beamline; and then, after the Bionanoprobe was relocated, at the X-ray Science Division Microscopy Group’s 9-ID beamline, both at the APS. They found that 80% of the total cellular iron ended up in acidocalcisomes under these conditions. They found similar results in zinc-deficient scenarios, when the cells took up extra iron in an attempt to gather the missing zinc. Again, 60% of the total iron ended up in the acidocalcisomes, keeping the concentration in the cytoplasm at levels similar to environments with just the right amount of trace metal supply.

Interestingly, the cell’s response to copper turned out to be different than that for iron. Under conditions with limited zinc and iron, total copper in the cells was elevated, as if the cells tried to amass whatever metals were around in an effort to compensate for those missing metals. But in this case, the researchers found that the acidocalcisome was only taking up a portion of the excess copper, while a substantial portion of the copper was still found outside of the storage sites.

The findings are interesting in and of themselves, but the study also establishes a framework for future research. The researchers compared results in single cells to data from whole cultures and found excellent correlation. This suggests that bulk data accurately reflects the status of metal nutrition in single cells, and vice versa, offering a powerful tool for the study of the remarkable metals of biology.  ― Erika Gebel Berg

This work was supported by a grant from the National Institutes of Health (GM42143) to S.S.M. for the work on copper, and by a grant from the U.S. Department of Energy (DOE, DE-SC0020627) to S.S.M. and S.S. for the work on iron. Use of the LS-CAT was supported by the Michigan Economic Development Corporation and the Michigan Technology Tri-Corridor (Grant 085P1000817). The authors appreciate the support of Keith Brister and Michael Bolbat at LS-CAT and the support of Evan Maxey at beamline 9-ID-B. This research used resources of the Advanced Photon Source, a U.S. DOE Office of Science User Facility, operated for the DOE Office of Science by Argonne National Laboratory under Contract No. DE-AC02-06CH11357.