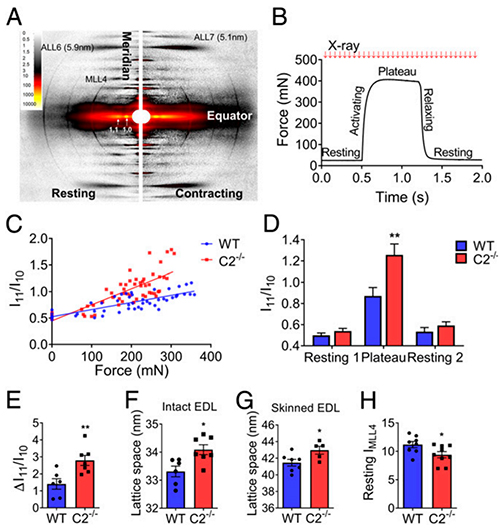 On a molecular level, muscle contraction and relaxation are achieved when thick filaments containing myosin and thin filaments containing actin interact in the sarcomere—the fundamental functional unit of striated muscle. Myosin-binding protein-C (MyBP-C) is a thick-filament regulatory protein expressed in striated muscle. It has three paralogs, each encoded by a different gene: slow skeletal (sMyBP-C), fast skeletal (fMyBP-C), and cardiac (cMyBP-C). Much effort has been placed toward studying the cardiac isoform due to its role in hypertrophic cardiomyopathy, a disease caused by abnormal genes in the heart muscle, which cause the walls of the heart chamber (left ventricle) to contract harder and become thicker than normal causing the thickened walls to become stiff, while fMyBP-C remains the least studied. However, interest in fMyBP-C is increasing because the fast skeletal isoform has been linked to congenital skeletal muscle diseases. These myopathies include distal arthrogryposis and lethal congenital contracture syndrome, which can cause devastating impairments such as muscle weakness and atrophy and can even be incompatible with life. Recently, a group of researchers set out to better understand fMyBP-C on a molecular level. Using knockout mice, the researchers conducted a suite of experiments including x-ray diffraction, which was carried out at the U.S. Department of Energy’s Advanced Photon Source (APS). Insights from these experiments helped the team elucidate the structural and functional roles that fMyBP-C plays in fast skeletal muscle contraction. These findings, published in the Proceedings of the National Academy of Sciences of the United States of America, elevate the field’s understanding of myosin-binding proteins and move forward research related to skeletal myopathies.

Human skeletal and cardiac muscle is made up of thousands of organelles called myofibrils that allow muscles to contract. As they contract, sliding occurs between the myosin-based thick and actin-based thin filament contractile proteins, allowing the muscles to shorten. Myosin-binding protein-C (MyBP-C) governs this process. The three MyBP-C paralogs, sMyBP-C, fMyBP-C, and cMyBP-C have similar protein structures but are each encoded by different genes and have unique functional and regulatory mechanisms.

Using the Bio-CAT 18-ID beamline at the APS (the APS is an Office of Science user facility at Argonne National Laboratory) for small-angle x-ray diffraction studies, the researchers measured the x-ray diffraction pattern of EDL muscle both at rest and during isometric contraction. The resulting data (Fig. 1) on the C2−/− EDL muscle showed increased mobility of myosin heads. During contraction, there was a shift of myosin heads toward actin and, at rest, the myosin heads were less ordered. The data also suggested increased spacing in the interfilament lattice spacing for C2−/− EDL muscle.

This study improved our understanding about how the three fMyBP-C paralogs differ in structure and function. Results from this work reveal important functional information about fast-skeletal MyBP-C in fast-twitch muscle: that fMyBP-C regulates force, power, and contractile speed. By regulating myofilament calcium sensitivity and actin–myosin interactions, fMyBP-C produces forces that meet the demands of fast-twitch skeletal muscles. These new insights increase the field’s knowledge of myosin-binding proteins and will accelerate skeletal muscle disease research.  ― Alicia Surrao