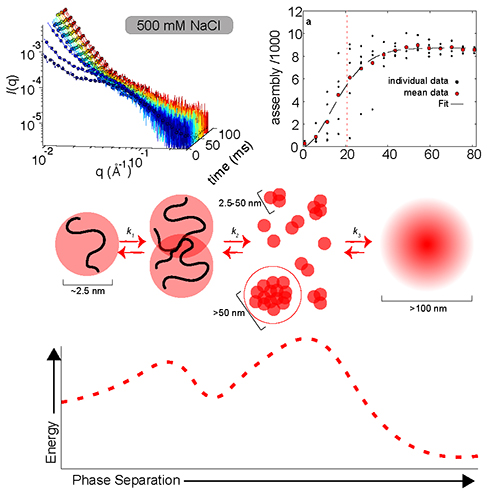 Usually, eukaryotic cells organize the functions of life by compartmentalization inside lipid membranes, but some fast processes requiring great precision happen in compartments formed through liquid-liquid phase separation (LLPS), similar to the way oil droplets will separate in a water solution. LLPS has become increasingly recognized as an important biological process not only in normal physiology but in certain pathologies, including neurodegenerative diseases such as Alzheimer’s, amyotrophic lateral sclerosis, and Parkinson's. A more detailed understanding of LLPS could lead to better therapeutic approaches, but the blazingly fast microsecond-to-millisecond time scales on which LLPS happens as a solution changes from the one-phase to the two-phase regime have made characterization of the process extremely challenging. A team of researchers from a diverse range of institutions approached that challenge by using the high-brightness x-rays from the U.S. Department of Energy’s Advanced Photon Source (APS) to capture for the first time the kinetics of how LLPS happens in a biomolecular solution. The work appeared in Nature Communications.

The investigators from St. Jude Children's Research Hospital, the Max Planck Institute, the Illinois Institute of Technology, Washington University in St. Louis, and the National Institutes of Health focused on a prion-like domain called A1-LCD, the low-complexity domain of the hnRNPA1 protein, which has been implicated in neurodegenerative diseases in its mutated form. LLPS occurs when local conditions transform a single-phase solution to two phases. In the vast majority of biological systems, LLPS is initiated by a phenomenon known as nucleation. Previously, nucleation was thought to be largely dependent on perturbation of the equilibrium between the solvent and the biomolecules it contained, but the extreme time resolution achieved in this work reveals that the process is more complex than previously believed.

In studying the time-dependent process of LLPS, the research team used the technique of rapid-mixing, time-resolved small-angle x-ray scattering (TR-SAXS) at the Bio-CAT 18-ID-D beamline at the APS. The TR-SAXS techniques offer a detailed look into the earliest stages of the transition (Fig. 1). By combining data from two different microfluidic mixers, the investigators were able to conduct SAXS observations on a time scale from 80 microseconds to 80 milliseconds for the first time in the same experimental session. This provided key insights into the outstanding question of why the nucleation of some biomolecules can occur in fractions of a second, while others require hours to complete phase separation.

On the mesoscale, the A1-LCD phase separation seems to follow a classical homogeneous nucleation pattern. In this regime, the nucleation and assembly rate are determined by the quench depth, both slowing as quench depth decreases. Taking advantage of the power of SAXS to observe assembly also on the nanoscale, the researchers noticed that early assembly steps were unfavorable before additional monomers were added to form larger clusters. These findings indicate the presence of two distinct kinetic steps in the LLPS of A1-LCD, which introduce a time lag, noticeable for A1-LCD only with these high-precision measurements. This time lag likely contributes to the long time periods needed for phase separation in some proteins.

The work demonstrates that phase separation in some biological systems can be more complex than in simpler physical systems, which only require crossing the phase boundary. Since additional steps can occur at different timescales and conditions, equilibrium analysis is not enough to provide a full understanding of the phase separation process, and a careful kinetic analysis is necessary. Additional steps offer opportunities for cells to regulate phase separation, revealing the newly recognized biological usefulness of this process.

The small, bright beams of the APS Upgrade will make these kinds of SAXS experiments with microfluidic mixers much easier to do, with expected gains in time, resolution, and data quality.  ― Mark Wolverton

T.M. acknowledges funding by NIH grant R01NS121114, the St. Jude Children’s Research Hospital Research Collaborative on Membrane-less Organelles in Health and Disease, and by the American Lebanese Syrian Associated Charities. This work was supported by the Intramural Research Programs of the National Institute of Biomedical Imaging and Bioengineering, NIH, and resources supported by grant 9 P41 GM103622 from the National Institute of General Medical Sciences of the National Institutes of Health. Use of the Pilatus 3 1M detector was provided by grant 1S10OD018090-01 from NIGMS. This research used resources of the Advanced Photon Source, a U.S. Department of Energy (DOE) Office of Science User Facility operated for the DOE Office of Science by Argonne National Laboratory under Contract No. DEAC02- 06CH11357