What Bacterial Pathogens Can Teach Us about Protein Folding 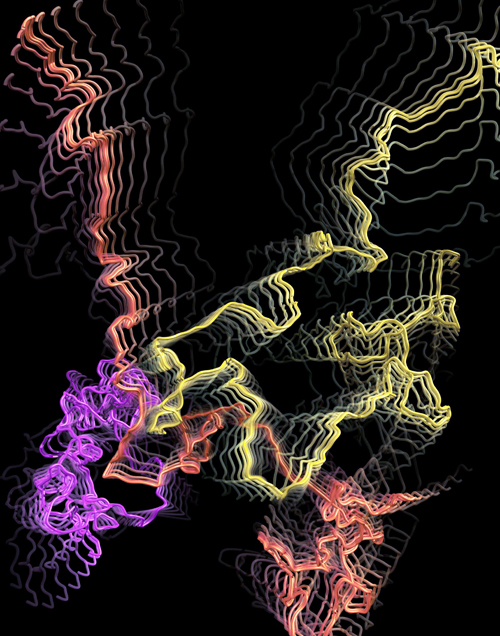 Protein folding is one of the fascinating unanswered questions in biology. How does an amino acid sequence that is unfolded when it leaves the ribosome manage to fold properly into a highly ordered, lightning-fast enzyme or sturdy structural protein? Why don’t all the proteins in the cell instead just stick to each other, aggregating into a big mess? A unique model system in bacteria may hold some of the answers to these questions. The system involves the study of what are termed autotransporter proteins, which pathogenic bacteria secrete as virulence factors for infection. These proteins are synthesized in the bacterial cytoplasm and cross one membrane into the bacterial periplasm. Autotransporter proteins then remain in an unfolded state in the periplasm until they pass through the outer bacterial membrane, folding properly along the way. This highly specialized protein folding process has attracted the attention of a team of researchers who have used this bacterial system as a model to determine what allows these unique proteins to maintain their disordered state in the periplasm. The work includes studies carried out at the U.S. Department of Energy’s Advanced Photon Source (APS) and was published in the journal Proceedings of the National Academy of Sciences of the United States of America. The authors believe their work will provide important information toward understanding basic questions of protein folding and tests long-held theories about how this remarkable biological process works.

Current hypotheses on protein folding suggest that folding is initiated by formation of secondary structures followed by association of the hydrophobic regions of the emerging structure to orient them toward the interior of the protein in a process termed hydrophobic collapse. This is thought to make globular proteins stable and soluble in the watery environment of the cell. However, previous work by this team of researchers from the University of Notre Dame and The University of Chicago has shown that, contrary to popular belief, intrinsically disordered proteins, which sample a variety of conformational forms the way the autotransporter proteins do, can remain quite extended in water even if they have high ratios of hydrophobic to charged amino acids.  This observation has led them to try and understand how proteins with high hydrophobic ratios can maintain these extended conformations. For this work, they turned to the N-terminal passenger domain of the pertactin virulence protein from Bordetella pertussis, a typical autotransporter.

The first step was to analyze the impact of the sequence of the amino acids in the passenger domain on the folding process. They made different versions of the pertactin domain by swapping amino acids to change the clustering of hydrophobic amino acids but keep the overall sequence and hydrophobicity ratio the same. They analyzed structural changes in the variants compared to the wildtype pertactin domain by small-angle x-ray scattering (SAXS) at the Biophysics Collaborative Access Team (Bio-CAT) 18-ID x-ray beamline of the APS. (The APS is an Office of Science user facility at Argonne National Laboratory.) They found that swapping just 6 of the 334 amino acids (2%) in the N-terminal domain of pertactin to increase hydrophobic clustering was enough to induce significant contraction of the structure. Also, the more the variants contracted, the more likely they were to aggregate.

This swapping also had functional effects. When they expressed the swap variants in bacteria, they found that the ones that contracted more and were not as disordered were also not able to maintain a disordered state in the periplasm of the bacteria and were not secreted properly. This finding suggests that spacing of hydrophobic amino acids must be under selective pressure in bacterial proteins to facilitate their virulence functions. This hypothesis was borne out by analysis of other autotransporter sequences that also appear to have patterning based on spacing of hydrophobic clusters.

Going forward, the team will test the extent of collapse in an even wider range of sequences, to more fully understand the importance of maintaining a highly expanded conformation prior to folding.  — Sandy Field

We thank Srinivas Chakravarthy (Bio-CAT) for assistance with the SAXS measurements and Gina Jozwiak for assistance with RNA quantification and protein purification. This work was supported by grants from the National Institutes of Health (GM130122 [T.R.S. and P.L.C.] and GM055694 [T.R.S.]), the W. M. Keck Foundation (P.L.C.), and the National Science Foundation (MCB 1516959 [C. R. Matthews]). Use of the Advanced Photon Source, an Office of Science User Facility, operated for the Department of Energy (DOE) Office of Science by Argonne National Laboratory, was supported by the DOE under Contract DEAC02-06CH11357.