Deconstructing the Infectious Machinery of SARS-CoV-2 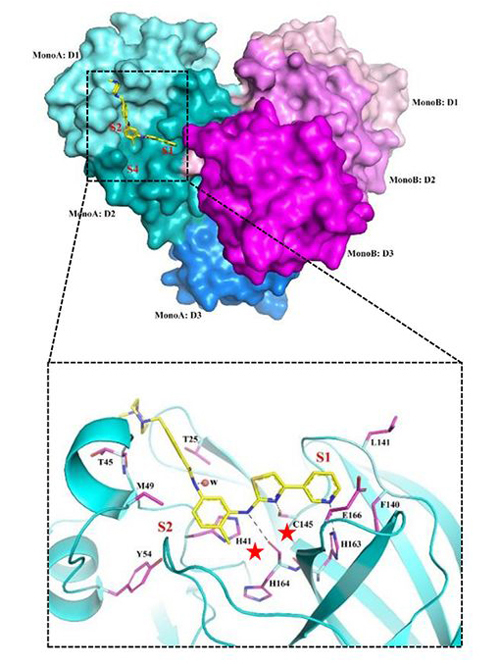 In February 2020, a trio of bio-imaging experts were sitting amiably around a dinner table at a scientific conference in Washington, D.C., when the conversation shifted to what was then a worrying viral epidemic in China. Without foreseeing the global disaster to come, they wondered aloud how they might contribute. Nearly a year and a half later, those three scientists and their many collaborators across three U.S. Department of Energy (DOE) national laboratories have published a comprehensive study in the Biophysical Journal, based on research at those DOE laboratories that – alongside other recent, complementary studies of coronavirus proteins and genetics – represents the first step toward developing treatments for that viral infection, now seared into the global consciousness as COVID-19.

Their foundational work focused on the protein-based machine that enables the SARS-CoV-2 virus to hijack our own cells’ molecular machinery in order to replicate inside our bodies.

“It has been remarked that all organisms are just a means for DNA to make copies of itself, and nowhere is this truer than in the case of a virus,” said Greg Hura, a staff scientist at Lawrence Berkeley National Laboratory (Berkeley Lab) and one of the study’s lead authors. “A virus’s singular task is to make copies of its genetic material – unfortunately, at our expense.”

Viruses and mammals, including humans, have been stuck in this battle for millions of years, he added, and over that time the viruses have evolved many tricks to get their genes copied inside us, while our bodies have evolved counter defenses. And although viruses often perform a long list of other activities, their ability to harm us with an infection really does come down to whether or not they can replicate their genetic material (either RNA or DNA, depending on the species) to make more viral particles, and use our cells to translate their genetic code into proteins.

The protein-based machine responsible for RNA replication and translation in coronaviruses – and many other viruses – is called the RNA transcription complex (RTC), and it is a truly formidable piece of biological weaponry.

To successfully duplicate viral RNA for new virus particles and produce the new particles’ many proteins, the RTC must: distinguish between viral and host RNA, recognize and pair RNA bases instead of highly similar DNA bases that are also abundant in human cells, convert their RNA into mRNA (to dupe human ribosomes into translating viral proteins), interface with copy error-checking molecules, and transcribe specific sections of viral RNA to amplify certain proteins over others depending on need – while at all times trying to evade the host immune system that will recognize it as a foreign protein.

As astounding as this sounds, any newly evolved virus that is successful “must have machines that are incredibly sophisticated to overcome mechanisms we have evolved,” explained Hura, who heads the Structural Biology department in Berkeley Lab’s Molecular Biophysics and Integrated Bioimaging Division.

He and the other study leads – Andrzej Joachimiak of the Structural Biology Center (SBC-XSD) at the Argonne National Laboratory Advanced Photon Source (APS) and Center of Structural Genomics of Infectious Disease at the University of Chicago and Hugh M. O’Neill at Oak Ridge National Laboratory – specialize in revealing the atomic structure of proteins in order to understand how they work at the molecular level. So, the trio knew from the moment they first discussed COVID-19 at the dinner table that studying the RTC would be particularly challenging because multitasking protein machines like the RTC aren’t static or rigid, as molecular diagrams or ball-and-stick models might suggest. They’re flexible and have associated molecules, called nonstructural and accessory proteins (Nsps), that exist in a multitude of rapidly rearranging forms depending on the task at hand – akin to how a gear shifter on a bike quickly adapts the vehicle to changing terrain.

Each of these Nsp arrangements give insights into the protein’s different activities, and they also expose different parts of the overall RTC surface, which can be examined to find places where potential drug molecules could bind and inhibit the entire machine.

So, following their serendipitous convergence in Washington, the trio hatched a plan to pool their knowledge and national lab resources in order to document the structure of as many RTC arrangements as possible, and identify how these forms interact with other viral and human molecules.

Despite the extraordinary hurdles of conducting science during shelter-in-place conditions, the collaboration was able to work continuously for more than 15 months, thanks to funding for research and facility operations support from the Department of Energy’s Office of Science National Virtual Biotechnology Laboratory (NVBL). During that time, the scientists collected detailed data on the RTC’s key accessory proteins and their interactions with RNA. All of their findings were uploaded into the open-access Protein Data Bank prior to the journal article’s publication.

Of the many structural findings that will help with drug design, one notable discovery is that assembly of the RTC subunits is incredibly precise. Drawing on a mechanical metaphor once more, the scientists compare the assembly process to putting together a spring-based machine. You can’t put a spring in place when the rest of the machine is already in position, you must compress and place the spring at a specific step of assembly or the whole device is dysfunctional. Similarly, the RTC Nsps can’t move into place in any random or chaotic order; they must follow a specific order of operations.

They also identified how one of the Nsps specifically recognizes the RNA molecules it acts upon, and how it cuts long strands of copied RNA into their correct lengths.

“Having the vaccines is certainly huge. However, why are we satisfied with just this one avenue of defense?” said Hura. Added Joachimiak: “This was a survey study, and it has identified many directions we and others should pursue very deeply; to tackle this virus we will need multiple ways of blocking its proliferation.”

“Combining information from different structural techniques and computation will be key to achieving this goal,” said O’Neill.

Due to the similarity of RTC proteins across viral strains, the team believe that any drugs developed to block RTC activity could work for multiple viral infections in addition to all COVID-19 variants.

Reflecting back to the beginning of their research journey, the scientists marvel at the lucky timing of it all. When we started to talk, said Hura, “we had no idea that this epidemic would soon become a pandemic that would change a generation.”