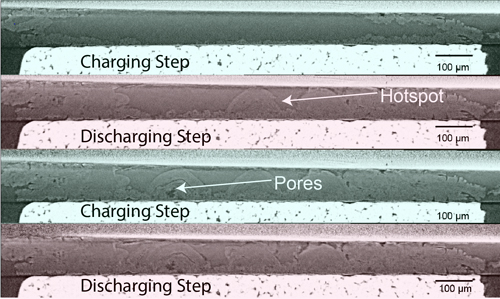 Lithium-based batteries need improvement. Lithium-ion batteries are lightweight with high energy density, and therefore commonly used in phones, laptops, and electric vehicles.  However, they have limited charge capacity, which is inherent to their structure and which restricts the range of electric cars and shortens how long we can talk on our phones before recharging. A newer type of battery, made of lithium metal instead of lithium ions, could hold much more charge. But first we need to solve key material challenges associated with these batteries. In particular, lithium metal batteries are prone to shorting and material damage when the lithium metal meets the ceramic parts of the battery. This can sharply limit the battery’s useful life. Now, a group of researchers has used the U.S. Department of Energy’s Advanced Photon Source (APS) to image the lithium-ceramic interface and explain why the damage occurs. Their research, which could lead to a new generation of much better batteries made of lithium metal, were published in Applied Energy Materials.

But lithium metal has challenges. As the battery cycles through charging and discharging, the lithium has a tendency to grow dendrites, long roots of metal that worm into the ceramic sections of the battery and crack it. The lithium metal also has a tendency to peel away from the ceramic, breaking the contact and reducing the battery’s capacity. That in turn reduces the amount of time a device can run or drive without recharging.

A team of researchers from Vanderbilt University with a colleague from Purdue University wanted to understand the physical reasons why lithium metal grows dendrites and cracks. Lithium metal batteries are challenging to image because lithium atoms are small and lightweight, so the absorption contrast between the metal and holes in the metal is very small. Fortunately, with assistance from scientists in the X-ray Science Division’s Materials Physics & Engineering Group, they were able to use the 1-ID-E beamline at the APS (an Office of Science user facility at Argonne National Laboratory) to accomplish this.  The high flux of APS x-rays combined with a highly monochromatic beam (set to 72 keV) allowed the researchers to optimize the contrast so they could distinguish between lithium metal and empty voids.

The voids indeed revealed the source of the trouble. They create an imbalance of charge and electric flux. The imbalance stresses the material at the edges of the voids, and can lead to cracking, dendrite formation, or other degradation of the battery (Fig. 1). Researchers had guessed that this might be the case, but the research team’s images from the APS are the first experimental validation of this hypothesis.

Now that the researchers have confirmed the underlying physics of the problem, they have begun working on mitigating it. There are several strategies that could help, including coating the interface between the lithium metal and ceramic to allow for smoother metal deposition, reducing voids, and potentially changing the operating pressure of the battery.

The research is at the point where material scientists can begin work on actual, improved solid state lithium energy storage that could find practical use as the next generation of batteries in everyday devices.  ― Kim Krieger

K.B.H. and M.B.D. acknowledge support from National Science Foundation (NSF) Grant 1847029. K.B.H. and W.Z. acknowledge support from NSF Grant 1821573. P.P.M. and A.V. acknowledge financial support in part from a Scialog program sponsored jointly by Research Corporation for Science Advancement and the Alfred P. Sloan Foundation, which includes a grant to Purdue University by the Alfred P. Sloan Foundation. This research used resources of the Advanced Photon Source, a U.S. DOE Office of Science User Facility operated for the DOE Office of Science by Argonne National Laboratory under contract no. DE-AC02-06CH11357.