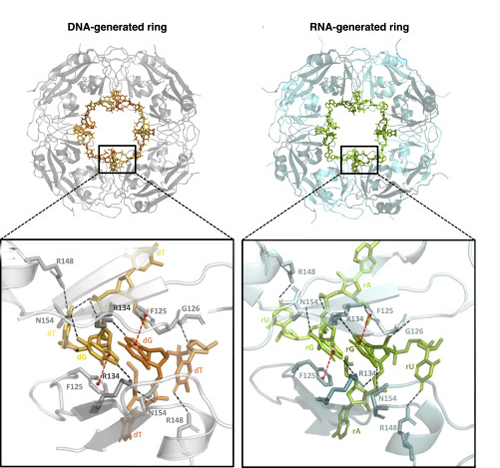 The original LaJolla Institute for Immunology press release by Madeline McCurry-Schmidt can be read here.

The human genome contains the instructions to make tens of thousands of proteins. Each protein folds into a precise shape—and biologists are taught that defined shape dictates the protein’s destined function. Tens of thousands of singular shapes drive the tens of thousands of needed functions. In a new cover story in Cell Reports, researchers at La Jolla Institute for Immunology, The Scripps Research Institute, and The Ohio State University using two U.S. Department of Energy x-ray light sources, including the Advanced Photon Source, demonstrate how Ebola virus has found a different way to get things done. The virus encodes only eight proteins but requires dozens of functions in its lifecycle. The new study shows how one of Ebola virus’s key proteins, VP40, uses molecular triggers in the human cell to transform itself into different tools for different jobs, presenting the possibility of new therapies to combat Ebola disease.

“We’re all taught that proteins have ‘a’ structure,” says study co-leader Erica Ollmann Saphire, professor at La Jolla Institute for Immunology (LJI) and member of the LJI Center for Infectious Disease and Vaccine Research. “Ebola virus’s VP40 protein, however, changes itself into different structures at different times, depending on the function needed.”

VP40 is the protein that gives Ebola virus its distinctive string-like shape. Saphire’s previous studies showed that VP40 can take on a two-molecule, butterfly-shaped “dimer” or an eight-molecule, wreath-like “octamer” form.

There are dramatic rearrangements of the protein as it transforms from one to the other. The dimer is what physically constructs new viruses that emerge and release from infected cells. The octamer functions only inside the infected cell, in a controlling role, directing other steps of the viral life cycle.

The new study shows exactly what triggers these structural changes. The researchers found that VP40 senses and relies on particular human mRNA to make the transformation from the dimer to octamer.

Saphire lab postdoctoral fellows Hal Wasserman and co-first author Sara Landeras Bueno, worked with purified VP40 in test tubes to get a glimpse of the dimer-to-octamer transformation in action. The duo tested many combinations of RNA molecules to try to trigger the transformation and found that particular human mRNA sequences rich in bases guanine and adenine were ideal for driving the same conformational change in vitro that they saw in high-resolution structures of VP40. Those structures were obtained via macromolecular x-ray crystallography at Eli Lilly’s Lilly Research Laboratory Collaborative Access Team 31-ID x-ray beamline of the Advanced Photon Source at Argonne National Laboratory, and at the 12-2 beamline of the Stanford Synchrotron Radiation Lightsource at the SLAC National Accelerator Laboratory (Fig. 1). Both are Office of Science user facilities.

“We were very excited and surprised to see that the RNA that triggers this change comes from the host cell and not the virus,” says Landeras Bueno. “The virus is hijacking the host cell—this is another example of a virus acting like a parasite.”

Saphire says the study sheds light on the fundamentals of how information is encoded in the genome. There’s the genetic code, of course, but Ebola virus also controls how VP40 is deployed during different stages of its life cycle. “It has an additional layer of programming,” Saphire says.

The new study also offers further evidence that VP40 is a promising target for effective therapies. Because Ebola virus cannot spread without VP40, the virus is unlikely to acquire VP40 mutations that let it “escape” antibody therapies. This vulnerability has led the LJI team to think of VP40 as Ebola’s Achilles’ heel.

“VP40 fulfills an elaborate system of requirements for Ebola virus, so we don’t expect it to change much,” says Wasserman. “That means if we could attack VP40 specifically, the virus would be helpless.”

Wasserman says the octamer’s regulatory function is still slightly mysterious. The octamer is known to be essential to the Ebola virus life cycle, but more work needs to be done to understand how this VP40 structure controls Ebola virus replication.

Saphire is very interested in investigating whether other viruses—or living organisms—have proteins with the same “structural plasticity” as VP40. “I’ve always wanted to know if this kind of functionality is more common in biology than we think,” she says.

The authors thank the beamline scientists at the Lilly Research Laboratories Collaborative Access Team beamline and at the 12-2 beamline of the Stanford Synchrotron Radiation Lightsource. Native MS development was supported by National Institutes of Health (NIH) grant P41 GM128577 to V.H.W. Use of the Stanford Synchrotron Radiation Lightsource, SLAC National Accelerator Laboratory, is supported by the U.S. Department of Energy (DOE) Office of Science-Basic Energy Sciences under contract no. DE-AC02-76SF00515. The SSRL Structural Molecular Biology Program is supported by the DOE Office of Biological and Environmental Research, and by the NIH National Institute of General Medical Sciences (including P41 GM103393). This research used resources of the Advanced Photon Source, a U.S. DOE Office of Science User Facility operated for the DOE Office of Science by Argonne National Laboratory under contract no. DE-AC02-06CH11357.

The cover image is an artistic representation of how butterfly-shaped dimers of the Ebola virus matrix protein VP40 combine and structurally transform the create the VP40 octameric ring. The image was created by Christina Corbaci. Used with permission from Cell Reports.