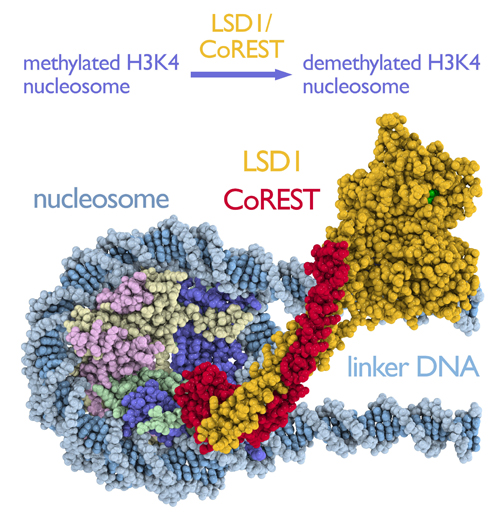 Within a cell’s nucleus, an intricate system exists that efficiently packages DNA. Histone proteins form an integral portion of this complex system by packaging DNA into structural units known as nucleosomes. The activity of histones is in part regulated by an important family of gene regulation enzymes known as histone demethylases. As an indicator of how biomedically important such gene regulation enzymes are, the histone deacetylase inhibitor Belinostat is an FDA-approved drug used to treat peripheral T-cell lymphoma. More broadly, histone demethylases have an intimate relationship with cancer. In stellar work recently published in Molecular Cell, researchers from The Pennsylvania State University used the U.S. Department of Energy’s Advanced Photon Source (APS) to solve the crystal structure of the histone demethylase LSD1 bound to its nucleosome substrate together with its accessory protein known as CoREST. Given that LSD1 is upregulated in various cancers and regulates stem cells, these findings have biomedical relevance. It would be intriguing to see if these major structural findings could be manipulated to generate drugs relevant to oncology and/or regenerative medicine.

The researchers demonstrated that LSD1 directly binds to DNA outside of the nucleosome,  while CoREST makes connections with both DNA and histone components of the nucleosome. In order to generate this remarkable crystal structure, x-ray diffraction data were generated in at the Northeastern Collaborative Access Team (NE-CAT) beamlines 24-ID-E at the APS (the APS is an Office of Science user facility at Argonne National Laboratory).

In animals, DNA exists in an organelle known as a nucleus. The nucleus is a fascinating structure with both an inner and outer membrane as well as pores that allow for an exchange of materials with the surrounding cytoplasm. Although the amount of DNA contained within a nucleus differs from animal to animal, there are approximately three billion base pairs in humans. Fitting so much DNA within a nucleus is equivalent to stuffing 30 miles of thread into a basketball. The robust packaging system required to achieve this feat uses histone proteins to wrap DNA into ordered structural units known as nucleosomes. Additional packaging and ordering ultimately converts these nucleosomes into a much larger chromosome.

Since histones are responsible for packaging DNA, they also control access to DNA. This is important when a cell wants to increase or decrease the expression of a given gene. Given this, there are multiple ways to regulate the activity of histone proteins. Two complementary regulatory mechanisms are methylation (i.e., adding a methyl group) and demethylation (i.e., removing a methyl group). Depending on various circumstances, adding or removing a methyl group can either enhance or inhibit gene transcription. Histone methylation—along with other processes like histone acetylation and DNA methylation—is a type of epigenetic regulatory process.

Two key proteins that regulate histone activity are the histone demethylase LSD1 and its accessory protein CoREST. Solving the crystal structure of the LSD1/CoREST complex bound to a nucleosome containing 191 base pairs of DNA at the NE-CAT x-ray beamlines demonstrates that, while the catalytic domain of LSD1 binds DNA outside of the nucleosome core, CoREST makes direct contacts with both DNA and histone nucleosome components.

LSD1 has been shown to be overexpressed in different cancers and also plays an important role in controlling the identity and differentiation of stem cells. Given these clinically relevant connections, future studies are warranted to determine if LSD1 and/or CoREST can be pharmacologically targeted for applications in oncology and/or regenerative medicine.