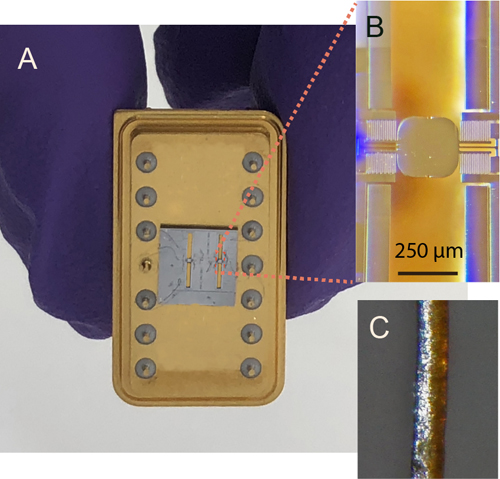 The original Optical Society press release can be read here.

Researchers from the U.S. Department of Energy’s Advanced Photon Source (APS) and Center for Nanoscale Materials at Argonne National Laboratory have developed and demonstrated new x-ray optics that can be used to harness extremely fast pulses in a package that is significantly smaller and lighter than conventional devices used to manipulate x-rays. The new optics are based on microscopic chip-based devices known as microelectromechanical systems (MEMS).

“Our new ultrafast optics-on-a-chip is poised to enable x-ray research and applications that could have a broad impact on understanding fast-evolving chemical, material and biological processes,” said research team leader Jin Wang from the X-ray Science Division Time Resolved Research (TRR) Group at the APS. “This could aid in the development of more efficient solar cells and batteries, advanced computer storage materials and devices, and more effective drugs for fighting diseases.”

In new results published in The Optical Society OSA) journal Optics Express, the researchers demonstrated their new x-ray optics-on-a-chip device (Fig. 1), which measures about 250 micrometers and weighs just 3 micrograms, using the TRR Group’s 7-ID-C x-ray beamline at the APS. The tiny device performed 100 to 1,000 times faster than conventional x-ray optics, which that tend to be bulky.

“Although we demonstrated the device in a large x-ray synchrotron facility, when fully developed, it could be used with conventional x-ray generators found in scientific labs or hospitals,” said Wang. “The same technology could also be used to develop other devices such as precise dosage delivery systems for radiation therapy or fast x-ray scanners for non-destructive diagnostics.”

X-rays can be used to capture very fast processes such as chemical reactions or the quickly changing dynamics of biological molecules. However, this requires an extremely high-speed camera with a fast shutter speed. Because many materials that are opaque to light are transparent to x-rays it can be difficult to improve the speed of shutters effective for x-rays.

To solve this challenge, the researcher team turned to MEMS-based devices. “In addition to being used in many of the electronics we use daily, MEMS are also used to manipulate light for high-speed communication,” said Wang. “We wanted to find out if MEMS-based photonic devices can perform similar functions for x-rays as they do with visible or infrared light.”

In the new work, the researchers show that the extremely small size and weight of their MEMS-based shutter allows it to oscillate at speeds equivalent to about one million revolutions per minute (rpm). The researchers leveraged this high speed and the MEMS material’s x-ray diffractive property to create an extremely fast x-ray shutter.

“The x-ray diffraction angular range is extremely small, about one-thousandth of a degree.  The fast-rotating device then creates the fast x-ray shutter,” said Donald Walko, a member of the research team, also from the TRR group.

Using their new x-ray optics-on-a-chip developed at the Center for Nanoscale Materials, the researchers demonstrated that it provides a stable shutter speed as fast as one nanosecond with an extremely high on/off contrast. This is used to extract single x-ray pulses from the source, even if the 352-MHz pulses were only 2.84 nanoseconds apart from each other.

“We show that our new chip-based technology can perform functions not possible with conventional large macroscopic optics,” said Wang. “This can be used to create ultrafast probes for studying fast processes in novel materials.”

The researchers are now working to make the devices more versatile and robust so that they can be used continuously over long periods of time. They are also integrating the peripheral systems used with the tiny chip-based MEMS devices into a deployable stand-alone instrument.

This research is supported by the Accelerator and Detector Research (ADR) Program of the U.S. Department of Energy (DOE) Office of Sciences-Basic Energy Sciences. The use of the CNM and APS was supported by the U.S. DOE Office of Science-Basic Energy Sciences under Contract no. DE-AC02-06CH11357. Critical technical support of a fast APD from Michael Hu of the APS is gratefully acknowledged.

The CNM is one of the five DOE Nanoscale Science Research Centers, premier national user facilities for interdisciplinary research at the nanoscale supported by the DOE Office of Science. Together the NSRCs comprise a suite of complementary facilities that provide researchers with state-of-the-art capabilities to fabricate, process, characterize and model nanoscale materials, and constitute the largest infrastructure investment of the National Nanotechnology Initiative. The NSRCs are located at DOE’s Argonne, Brookhaven, Lawrence Berkeley, Oak Ridge, Sandia and Los Alamos National Laboratories. For more information about the DOE NSRCs, please visit https://​sci​ence​.osti​.gov/​U​s​e​r​-​F​a​c​i​l​i​t​i​e​s​/​U​s​e​r​-​F​a​c​i​l​i​t​i​e​s​-​a​t​-​a​-​G​lance