Building a Better Simulation for a Better Refractory Oxide 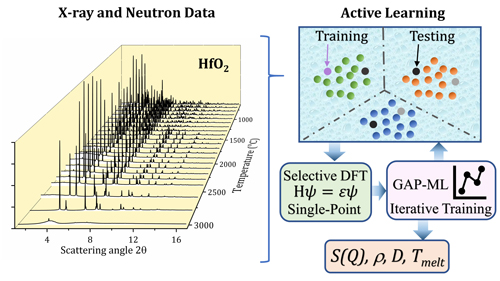 Refractory materials, defined as nonmetallic substances with very high melting points that allow them to withstand extremely high temperatures above 1500° C, are essential for industrial applications and processes that occur in such extreme conditions.  Refractory materials are used to coat the interiors of furnaces, incinerators, reactors, and wherever it's necessary to withstand great pressures and temperatures.  Properly testing such materials in such extreme environments is obviously challenging, so materials scientists greatly depend upon computational modeling techniques to accurately characterize the behavior of refractory materials. Methods such as ab initio molecular dynamics simulations (AIMD) have their limitations, however.  Some modeling techniques can only handle relatively small systems and short time scales, or do not always agree with experimental data.  Recent attempts to address these issues have focused on incorporating machine learning methods with quantum-mechanical calculations to achieve models of larger systems and time scales.  A group of researchers demonstrated this approach by creating a scheme to generate multiphase machine learning inter-atomic potentials (ML-IP) for the common refractory oxide material hafnium dioxide (HfO2) and testing it at the U.S. Department of Energy’s (DOE’s) Advanced Photon Source and Spallation Neutron Source. Their results were published as an Editor’s Suggestion in Physical Review Letters.

The investigators from the from University of Cambridge (UK), Helmholtz-Institute Munster (Germany), and Argonne National Laboratory devised an automated scheme of three parts, beginning with experimental measurements of sample material to obtain phase information up to the melting point.  In this work, X-ray diffraction data was collected on high-purity samples of HfO2 up to about 3000° C in reducing and oxygen atmospheres at the X-ray Science Division Magnetic Materials Group’s 6-ID-D x-ray beamline of the APS, an Office of Science user facility at Argonne , followed by complementary neutron diffraction measurements at the Spallation Neutron Source of Oak Ridge National Laboratory (Fig.1).

In the second step of the researchers' automated scheme, the dataset of x-ray and neutron diffraction measurements is used to initialize active learning to create approximate ML-IP models of the interaction potentials between atoms, and then in the final step, using these to perform ab initio calculations which are used to retrain the ML-IP model to its final form.  The process continues in a closed loop until an interatomic potential is found that can reproduce the measured structures over the experimentally determined phase space.

The active learning in this demonstration uses the Gaussian approximation potential (GAP) framework to generate and train the ML-IP model.  ML-IP based on GAPs have been previously shown to be applicable to a broad range of models including liquids, crystal defects, and amorphous, multicomponent, and molecular systems.  Here, the resulting model spans the HfO2 phase space from the liquid to amorphous to crystalline over 2053 configurations.

As it is heated, HfO2 passes from monoclinic to tetragonal to cubic phases and melts at about 2800° C. Production simulations were conducted with the ML-IP model, using a 6144-atom cell for monoclinic and cubic HfO2 and a 6912-atom cell for the tetragonal phase.  The decrease in long-range ordering with higher temperatures seen by neutron diffraction patterns in the tetragonal and cubic forms in the liquid and amorphous phases was accurately shown in the ML model.  Multiphase potential of HfO2 was also theoretically evaluated by comparing cohesive energy and diffusion coefficients using several methods.  The GAP technique was most accurate in predicting cohesive energies.  Diffusion calculations based on the MD simulations show little diffusion of either Hf or O at simulation temperatures but indicate greater diffusion of Hf in liquid HfO2 at higher temperatures.

The current work provides an effective proof of concept demonstrating how a three-step automated scheme can be used to generate a multiphase ML-IP for a refractory oxide material.  The scheme can initialize ab initio calculations directly from experimental models or measurements and thus effectively validate the models with ab initio accuracy.

The scheme presented here can also be used with ML-IP techniques other than the GAP framework employed in this demonstration and can be adapted to characterize a wide range of refractory oxides and similar materials.  It offers a new tool for computational modeling and simulation to supplement and enhance the development of unique materials for difficult applications.  ― Mark Wolverton