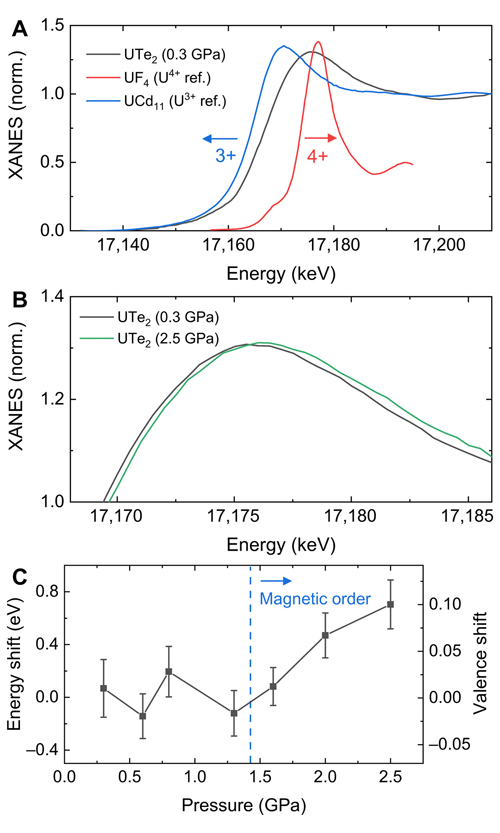 A practical quantum computer is the next major goal for computer science, offering processing speeds impossible for classical systems through the use of "qubits" instead of conventional bits.  Many different technological pathways toward this goal are being pursued, some of them involving the phenomenon of superconductivity.  Harnessing such an unconventional property of matter requires unconventional materials, however, so the quest for novel superconducting materials is vital, and sometimes leads to unexpected places, such as the compound uranium ditelluride (UTe2).  Although known for decades, UTe2 was only recently found to harbor an unusual flavor of superconductivity called "spin-triplet" topological superconductivity that might facilitate quantum computers.  Researchers using x-ray beams from the U.S. Department of Energy’s Advanced Photon Source (APS) found that UTe2 reveals some further intriguing characteristics when subjected to applied pressures. A greater understanding of its unusual qualities will clearly be needed before it can be determined whether it's a viable candidate for quantum computing technology, but further detailed studies no doubt promise more surprising discoveries and yet-unknown potential. The work appeared in Science Advances.

The experimenters sought to probe the pressure-temperature phase diagram of UTe2 to find how its suspected spin-triplet superconductivity is influenced by applied pressure and low temperature using a combination of ac calorimetry, electrical resistivity, and x-ray absorption near-edge spectroscopy (XANES).  The XANES measurements (Fig. 1) were performed at the X-ray Science Division Magnetic Materials Group’s 4-ID-D beamline of the APS, an Office of Science user facility at Argonne National Laboratory.

In most superconductors, the paired electrons (Cooper pairs) that allow the property have spins of opposite types, one “up” and one “down.”  Some rare materials, mostly certain uranium compounds on the border of ferromagnetism, are known as spin-triplet superconductors and can have Cooper pairs with three different combinations of spin orientations.  UTe2 is thought to be such a material, making it a good candidate for topological superconductivity.

Magnetic ordering was observed at pressures above 1.5 gigapascals (GPa), and the magnetic phase transition extrapolates to zero temperature at a pressure of 1.3 GPa, where resistivity exponents reveal a quantum critical point.  These results indicate somewhat surprising interactions between superconductivity and magnetism in uranium ditelluride, as a spin-triplet state is expected to arise from ferromagnetic fluctuations.

The XANES studies under pressure add to this complex picture.  Above the critical pressure point, UTe2 displays an increase of valence toward a 4+ state.  This suggests an intermediate valence at ambient pressure.  Since this valence increase accompanies the onset of the antiferromagnetic state, both properties appear to be intertwined elements in understanding the superconducting characteristics of UTe2. — Mark Wolverton

The experimental work at Los Alamos was performed under the auspices of the U.S. Department of Energy (DOE) Office of Science-Basic Energy Sciences, Division of Materials Science and Engineering, under project “Quantum Fluctuations in Narrow-Band Systems.” F. B. S. was supported by FAPESP under grant nos. 2016/11565-7 and 2018/20546-1. Theory work (M.H.C. and R.M.F.) was supported by the U.S. DOE Office of Science-Basic Energy Sciences, Materials Science and Engineering Division, under award no. DE-SC0020045. This research used resources of the Advanced Photon Source, a U.S. DOE Office of Science User Facility operated for the DOE Office of Science by Argonne National Laboratory under contract no. DE-AC02-06CH11357.