Revealing the Mechanism of an Otherworldly Metal-Insulator Transition 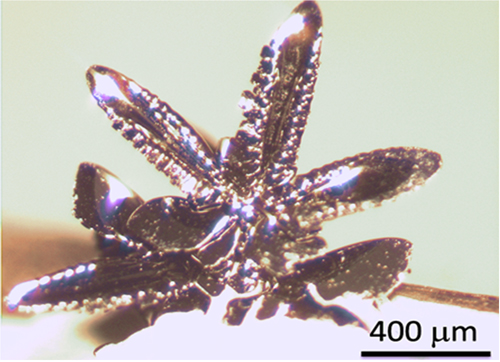 Hexagonal iron monosulfide (h-FeS), also known as troilite (Fig.1), isn't exactly a material one encounters every day. Mostly it's found in meteorites originating from the Moon or Mars, and it has also been identified on those worlds in situ by astronauts and space probes, although it was first discovered in the Earth's crust. But aside from its exotic origins, it features an intriguing crystal structure with multiferroic properties that make it a leading candidate for new technologies such as spintronics. Researchers used the U.S. Department of Energy’s (DOE’s) Advanced Photon Source (APS) to investigate that potential by using high-brightness x-rays to study the tightly-coupled interplay of the lattice, magnetic, and electronic degrees of freedom in h-FeS, which can provide insight into the possible design and tailoring of multiferroic and spintronic materials. The work was published in Nature Physics.

Specifically, the investigators from Duke University, the DOE’s Oak Ridge National Laboratory, and the University of Tennessee focused on the mechanisms controlling the metal-insulator transition (MIT) in this material. They found new connections between anharmonic phonons and spin waves in the metallic phase which lead to lattice distortion that opens up an electronic bandgap leading to the transition from the conducting to insulating phase, a mechanism that could be relevant to other materials that undergo a similar transition To study these phenomena in detail, the investigators collaborated with scientists from Argonne National Laboratory and Oak Ridge National Laboratory. The study included the use of high-resolution inelastic x-ray scattering at the X-ray Science Division Inelastic X-ray & Nuclear Resonant Scattering 30-ID x-ray beamline at the APS, inelastic neutron scattering (INS) at the Oak Ridge Spallation Neutron Source (SNS), and neutron diffraction measurements at the Oak Ridge High Flux Isotope Reactor (HFIR) along with first-principles simulations and thermodynamic analysis. The APS, SNS, and HFIR  are Office of Science user facilities.

Tracing the process by which h-FeS transitions from a metallic conductor to an insulator reveals that at temperatures above 590 K, the material shows a centrosymmetric nickel/arsenic-type structure in a metallic paramagnetic state. As it cools below 590 K, however, it begins to change to an antiferromagnetic (AFM) state, and triangular Fe clusters begin to form around 416 K. The formation of clusters is accompanied by a realignment of magnetic spins, resulting in structural distortion which narrows the Fe-Fe bond length and creates a bandgap transforming the material into an insulator.

The AFM ordering that emerges at lower temperatures permits the development of two zone-boundary soft phonons, which drive the distortions in the lattice. The researchers confirmed the importance of these anharmonic phonons to the metal-insulator transition both through IXS and INS experimental techniques and theoretical simulations. The interplay between magnetic and conductivity properties in h-FeS and similar materials was known to exist but not previously well-understood, particularly in terms of how it relates to the metal-insulator transition.

These findings demonstrate in detail for the first time how lattice instabilities and magnetic ordering can be intimately intertwined in ways that may permit one to control the other. In the current work, altering the temperature of the material controlled the phase and also the crystal lattice structure across the metal-insulator transition, but the observed results also open intriguing prospects for controlling magnetoelectric and structural properties through the tailored application of external magnetic fields. New multiferroic materials could also be designed that could be tuned for specific applications for spintronics and data storage, among other technologies.

Whether one calls it troilite or hexagonal iron sulfide, if such possibilities are realized, this unusual substance and its multiferroic cousins may ultimately become better known for its Earthly usefulness than its extraterrestrial prevalence.  — Mark Wolverton