Bringing to Light the Polymers that Mimic Biomolecular Machines 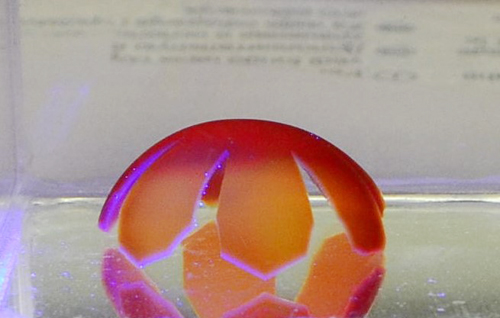 A growing amount of research has been geared toward creating synthetic soft matter that produces mechanical work through motion in response to external stimuli. Materials like these are inspired by biological tissues and could eventually be used as artificial muscles in many applications, such as manufacturing and chemical production, or even drug delivery. Researchers have explored several different forms of external stimuli for these applications, such as heat, pH (the relative amount of free hydrogen and hydroxyl ions), and redox reactions, but light is particularly attractive because of its non-invasive nature and the possibility of localizing the stimulus. An important gap in this field could be filled by the use of supramolecular polymers that can spontaneously reconfigure by forming noncovalent bonds, similar to natural materials such as cytoskeletal filaments. Hybrid systems in which monomers of these supramolecular polymers are chemically bonded to stimuli-responsive covalent polymer networks could have advantages such as strengthening and providing structure for the covalent polymers. Users of the U.S. Department of Energy’s (DOE’s) Advanced Photon Source (APS) from Northwestern University have accomplished this goal, reporting in Nature Materials the synthesis of a supramolecular-covalent hybrid polymer that contracts when exposed to visible light. Consequently, films and objects made of this material move when illuminated, exhibiting actions such as bending, crawling, or rotating.

This new hybrid polymer integrates two different components: a peptide amphiphile (PA) supramolecular polymer, displaying both hydrophilic and hydrophobic qualities; and a light-responsive polymer that changes conformation from a charged, hydrophilic, ring-open form (known as merocyanine), to a non-charged, hydrophobic, ring-closed form (known as spiropyran) when exposed to wavelengths in the visible spectrum. When combined, units of both materials copolymerize, forming a hydrogel made of a PA supramolecular polymer with a crosslinked, light-responsive network.

Using several analytical methods, including x-ray scattering performed at the DuPont-Northwestern-Dow Collaborative Access Team (DND-CAT) 5-ID-D beamline at the Advanced Photon Source, the researchers first characterized the PA supramolecular polymer, showing that monomers of this material joined together into well-defined nanofibers with widths of approximately 8-10 nanometers and lengths of tens of micrometers. When this material was mixed with the light-responsive polymer, further characterization showed that this network spread throughout and interspersed with clusters of the PA nanofibers. (The APS is a DOE Office of Science user facility at Argonne National Laboratory.)

Measurements of the resulting hybrid material’s mechanical properties showed that the supramolecular polymer mechanically reinforced the covalent polymer. Additional experiments showed that when sheets of this hydrogel were illuminated with visible light, they shrank to 83% of their original volume as the covalent polymer changed form, decreasing the optical density as well. The magnitude of shrinkage was significantly greater in the hybrid materials with a supramolecular component compared to the covalent polymers alone. When the researchers investigated this phenomenon using computer modeling, they saw that the collapsed structure of the hydrogel after light illumination expelled water molecules, rapidly using the supramolecular polymer as a vehicle once chemical reactions increased hydrophobicity of the hydrogel.

Further illustrating the localized response of this material to light, the researchers created star-shaped films and spotlighted individual arms, showing that each bent toward the light source, forming a gradient of hydrophobicity. This bending action was reversible and repeatable during periods of dark and light, with the hybrid material robustly cycling through 20 bending cycles at the maximum angle without breaking.

By changing the film’s shape again to a four-armed form, the researchers demonstrated that it can act as a crawler on a grooved surface, unidirectionally progressing in a worm-like motion under constant irradiation. When the researchers aimed a light beam at just one foot of this crawler, the motion changed to rotation.

The researchers suggest that this design — incorporating a light-responsive covalent polymer with a reversibly deformable and permeable supramolecular polymer that provides mechanical support — brings the field closer to mimicking the soft matter that provides mechanical actuation in living organisms. The next step, they add, will be to achieve the faster response of living matter.  — Christen Brownlee

This work was supported by the Center for Bio-Inspired Energy Science (CBES), an Energy Frontiers Research Center (EFRC) funded by the U.S. Department of Energy (DOE) Office of Science-Basic Energy Sciences under award number DE-SC0000989. Z. A. received postdoctoral support from the Beatriu de Pinós Fellowship 2014 BP‐A 00007 (Agència de Gestió d'Ajust Universitaris i de Recerca, AGAUR) and the Paralyzed Veterans of America (PVA) (grant no. PVA17_RF_0008). DND-CAT is supported by Northwestern University, The Dow Chemical Company, and DuPont de Nemours, Inc. X-ray scattering data was collected using an instrument funded by the National Science Foundation under Award Number 0960140. This research used resources of the Advanced Photon Source, a U.S. DOE Office of Science User Facility operated for the DOE Office of Science by Argonne National Laboratory under contract no. DE-AC02-06CH11357.