A Framework for an Anti-Cancer Light Therapy 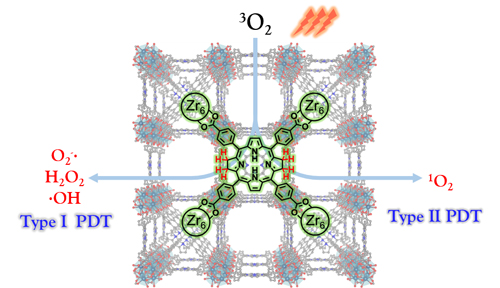 Where cancer is concerned, sometimes the treatment can be as bad as the disease, with invasive surgeries and aggressive chemotherapies taking a great toll on the health of patients. The search for effective noninvasive cancer treatments remains an active area of research. One promising strategy that is already in use as a cancer treatment is photodynamic therapy (PDT), which involves using light in combination with a photosensitizer to generate reactive oxygen species (ROS) and kill cancer cells. The approach has been limited by current photosensitizers, which have a number of drawbacks. Researchers are developing novel photosensitizers, such as nanoscale metal-organic framework (MOF)-stabilized bacteriochlorins, to overcome these limitations. In this study, researchers from The University of Chicago characterized these new photosensitizers using the U.S. Department of Energy’s Advanced Photon Source. They also took it a step further, testing the treatment strategy in cancer cells and animal models. Their results, published in the Journal of the American Chemical Society, shine new light on PDT as an effective and safe treatment for cancer.

Conventional photosensitizers for PDT absorb light in the visible range, which cannot penetrate deeply in tissues thus limiting treatment efficacy and causing photosensitivity in healthy surrounding tissues. They also require that a cancer mass contains significant amounts of oxygen, which is not always the case, as some tumors have low oxygen, limiting PDT's efficacy with conventional photosensitizers. To meet these challenges, researchers are turning to bacteriochlorin, a photosensitizer with minimal absorption in the visible range, the capacity to work in low oxygen environments, and, as an added bonus, strong absorption in the near-infrared range, which translates into a robust PDT response. However, these advantages come at a price: bacteriochlorin breaks down when exposed to oxygen and light.

To overcome bacteriochlorin's instability, researchers are using nanoscale MOFs, crystalline molecular scaffolds containing metal centers surrounded by organic ligands. In this study, bacteriochlorin was introduced into a nanoscale MOF to help stabilize the photosensitizer and enhance PDT. To solve the structure of the hafnium-based MOF (Hf-TBB), the researchers performed single-crystal x-ray diffraction with a Bruker APEX II CCD-based detector at the ChemMatCARS 15-ID x-ray beamline at the Advanced Photon Source. Zirconium, however, which is chemically similar to hafnium, became the metal of choice for a photosensitizer in this study. Powder x-ray diffraction pattern studies showed that bacteriochlorin in a zirconium-based MOF (Zr-TBB) adopted the same structure as Hf-TBB. Additional analytical studies demonstrated that Zr-TBB had superior stability in the presence of light and oxygen compared to the naked bacteriochlorin, thanks to the protection of the geometric framework.

Next, the researchers tested Zr-TBBs ability to produce cancer-killing oxygen species. They irradiated Zr-TBB in the presence of oxygen with 740-nanometer wavelength light, and found the photosensitizer produced various reactive oxygen species—superoxide anions, hydrogen peroxide, hydroxyl radicals, and singlet oxygen. This supported Zr-TBB as an effective agent for PDT with the capacity to access both type I and type II PDT mechanisms. The researchers observed the generation of these radical species in vitro, using breast carcinoma cells, finding greatly increased cytotoxicity and immunogenic cell death in those cells treated with Zr-TBB and light.

As a final test, the researchers explored the therapeutic value of Zr-TBB in vivo. Using mouse models of breast and colon cancer, PDT treatment with Zr-TBB led to a 40% and 60% cure rates, respectively.

These findings indicate that nanoscale MOFs offer a promising platform for PDT photosensitizers, including bacteriochlorins as well as other molecules.  — Erika Gebel Berg

Author affiliation: The University of Chicago

We thank Yang Song, Xuanyu Feng, Yunhong Pi, and Wenbo Han for experimental help. We acknowledge the National Cancer Institute (U01-CA198989) and The University of Chicago Medicine Comprehensive Cancer Center (NIH CCSG: P30 CA014599) for funding support. ChemMatCARS is principally supported by the Divisions of Chemistry (CHE) and Materials Research (DMR), National Science Foundation, under Grant NSF/ CHE-1834750. Use of the Advanced Photon Source, an Office of Science User Facility operated for the U.S. Department of Energy (DOE) Office of Science by Argonne National Laboratory, was supported by the U.S. DOE under Contract DE-AC02-06CH11357.