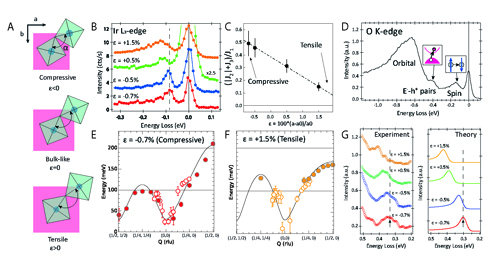 Spintronics is the rapidly approaching future of electronics, expanding the capabilities of all our devices by exploiting not only the electron's charge but its subatomic spin.  But a more exotic technology calls for more exotic materials, particularly those that can be precisely tailored for specific properties.  Especially promising in this regard is the class of antiferromagnetic perovskite oxides, hosting many handy characteristics including superconductivity, magnetoresistance, and Mott insulator-type behaviors.  In such a framework, the presence of high spin-orbit coupling allows additional leverage to control the magnetic structure through lattice deformations.  A team of experimenters from a diverse international group of institutions lead by researchers of the Paul Scherrer Institute used the U.S. Department of Energy’s Advanced Photon Source (APS) and two other x-ray light sources to explore the intricately entangled spin and orbital degrees of freedom and the lattice structure of strontium-iridium-oxide (Sr2IrO4) by inducing epitaxial strain on thin films to create lattice distortions.  Their work, published in the Proceedings of the National Academy of Sciences of the United States of America, provides an unprecedented level of understanding of the electron-lattice interactions in this important thin-film material and points to possibilities for customizing its properties for new applications.

Although it was previously realized that the magnetic and electronic properties of a strongly spin-orbit-coupled material such as Sr2IrO4 could be tuned by adjusting the lattice parameters, the realization of such ideas was constrained by the difficulty in measuring the detailed interactions as external strains are imposed.  The research team used resonant inelastic x-ray scattering (RIXS) at both the Ir L3-edge and the O K-edge in combination, which allowed them to obtain a global picture of the consequences of strain on the interactions in the spin and charge degrees of freedom.  The various RIXS studies were conducted at the X-ray Science Division Inelastic X-ray & Nuclear Resonant Scattering Group’s 27-ID-B beamline at the APS, an Office of Science user facility at Argonne National Laboratory. These measurements were also carried out at the ADRESS beamline of the Swiss Light Source at the Paul Scherrer Institute and at the ID20 beamline of the European Synchrotron Radiation Facility.

To create strains on the crystalline structure of the Sr2IrO4 thin films, the experimenters deposited the material on various substrates, observing the resulting interactions with RIXS.  Depending on the particular substrate, this technique creates compressive or tensile strains on the octahedral perovskite structure of the Sr2IrO4 films, which can be carefully tuned.  In these experiments, the samples displayed electron-hole pair excitations of lower energies under compressive strain and higher energies under tensile strain, which particularly under the latter, reflects the increase of the Mott insulator gap.  This was accompanied by an anisotropic softening of the pseudospin-wave dispersion, entailing an evolution from longer-range to shorter-range magnetic exchange interactions.  Under a compressive strain, Sr2IrO4 appeared to move toward a metallic state, and also to exhibit characteristics of a cuprate material.  The investigators suggest that these observed changes are the result of changes in the Ir-O-Ir bond angles under the epitaxial strains.

A parameter not explored in these experiments is temperature in combination with strain engineering.  Because the low-energy electronic structure of Sr2IrO4 is temperature-dependent, this might provide another "handle" for tuning and customizing the functional properties of the material, either on its own or in conjunction with doping.

As with high-Tc Cu oxides, the ground state of high-spin-orbit-coupled oxides such as Sr2IrO4 provides an intriguing and quite versatile gateway into finding methods to manipulate and control their characteristics, and hence their utility for various applications.  The realization of that prospect, however, requires a detailed understanding of the highly complex relationships between the finely entangled spin-orbital states and the local lattice structure.  In this work, the research team has used a combination of both direct and indirect RIXS techniques to provide an unprecedented level of detailed understanding of the electron-lattice interactions in this important thin-film material.  — Mark Wolverton

The work at PSI is supported by the Swiss National Science Foundation (SNSF) through Project 200021_178867, the NCCR (National Centre of Competence in Research) MARVEL (Materials’ Revolution: Computational Design and Discovery of Novel Materials) and the Sinergia network Mott Physics Beyond the Heisenberg Model (MPBH) (SNSF Research Grants CRSII2_160765/1 and CRSII2_141962). K. W. acknowledges support by the Narodowe Centrum Nauki Projects 2016/22/E/ST3/00560 and 2016/23/B/ST3/00839. E. M. P. and M. N. acknowledge funding from the European Union’s Horizon 2020 research and innovation programme under the Marie Sklodowska-Curie Grant Agreements 754411 and 701647, respectively. M. R. was supported by the Swiss National Science Foundation under Project 200021–182695. This research used resources of the APS, a U.S. Department of Energy (DOE) Office of Science User Facility operated for the DOE Office of Science by Argonne National Laboratory under Contract DE-AC02-06CH11357.