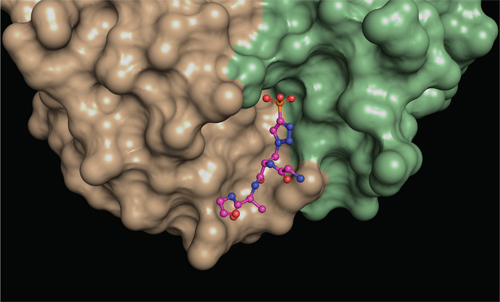 The original Salk News article can be read here

In structural biology, some molecules are so unusual they can only be captured with a unique set of tools. That’s precisely how a multi-institutional research team led by Salk scientists defined how antibodies can recognize a compound called phosphohistidine—a highly unstable molecule that has been found to play a central role in some forms of cancer, such as liver and breast cancer and neuroblastoma. These insights not only set up the researchers for more advanced studies on phosphohistidine and its potential role in cancer, but will also enable scientists to manipulate the shape and atomic makeup of the antibodies’ binding sites in order to design ever more efficient antibodies in the future. The study, using data obtained at three U.S. Department of Energy x-ray light sources including the Advanced Photon Source, was published in the Proceedings of the National Academy of Sciences of the United States of America.

“We are excited that these new antibody structures reveal novel principles of antigen binding. Now we can redesign these antibodies and engineer their properties to make them more efficient,” said Tony Hunter, Renato Dulbecco Chair and American Cancer Society Professor at Salk and the paper’s senior author. “This work may also provide other scientists with phosphohistidine antibodies that better suit their research purposes.”

Amino acids are joined together in precise sequences to form proteins, and several of them can undergo chemical transformations that can change the activity of the protein for better or worse. One such transformation is a process called phosphorylation, when a compound called phosphate is added to an amino acid, changing its shape and charge. Previously, Hunter showed that phosphorylation on the amino acid tyrosine can drive cancer progression, a discovery that led to numerous anticancer drugs. More recently, Hunter turned his attention to phosphorylation of the amino acid histidine (which creates phosphohistidine), suspecting that the process might also play a role in human disease.

“My long-term colleague Tony and I have been collaborating on this project for the past seven years,” says Wilson. “We have obtained new insights into how antibodies can evolve to recognize phosphates linked to proteins, which is very satisfying.”

“To understand the molecular interactions between the antibodies and phosphohistidine, we needed to look at them in great detail,” says first author Rajasree Kalagiri, a Salk postdoctoral researcher and expert in x-ray crystallography. “Once we got the antibodies to form crystals, we bombarded those crystals with x-rays to obtain a diffraction pattern. We then applied methods that transform the diffraction pattern into a three-dimensional electron density map, which was then used to discern the atomic structure of the antibodies.”

The two types of antibody crystal structures solved by the team revealed exactly how different amino acids are arranged around the phosphohistidine to bind it tightly. Their five structures more than double the number of phospho-specific antibody structures previously reported and provide insights into how antibodies recognize both the phosphate and the linked histidine. They also reveal at a structural level how the two types of antibody recognize different forms of phosphohistidine, and this will allow the scientists to engineer improved antibodies in the future.​

Use of the Stanford Synchrotron Radiation Light source, SLAC National Accelerator Laboratory, is supported by the U.S. Department of Energy (DOE) Office of Science-Basic Energy Sciences, under Contract DE-AC02-76SF00515. The Advanced Light Source is a DOE Office of Science User Facility under Contract DE-AC02-05CH11231. The Pilatus detector on 5.0.1. was funded under National Institutes of Health (NIH) Grant S10OD021832. GM/CA-XSD has been funded by the National Cancer Institute (ACB-12002) and the National Institute of General Medical Sciences (AGM-12006, P30GM138396). Funding for reagents used in this project, and salary support, was provided by NIH 5 R01 CA082683, NIH 5 R01 CA194584, and NIH 1 R35 CA242443 (to T.H.); Leona M. and Harry B. Helmsley Charitable Trust Grant 2012-PG-MED002; and the Skaggs Institute for Chemical Biology at The Scripps Research Institute. The Salk Peptide Synthesis and Proteomics Cores are supported by P30 CA014195. T.H. is a Frank and Else Schilling American Cancer Society Professor and holds the Renato Dulbecco Chair in Cancer Research. I.A.W. is the Hansen Professor of Structural Biology. This research used resources of the Advanced Photon Source, a U.S. DOE Office of Science User Facility operated for the DOE Office of Science by Argonne National Laboratory under Contract DE-AC02-06CH11357.