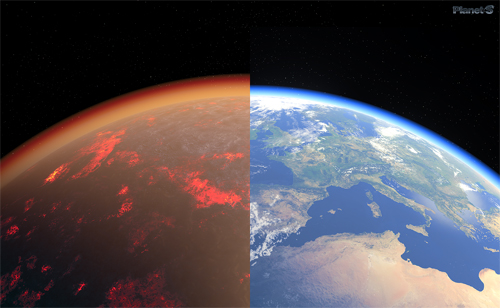 Venus is supremely uninhabitable due to its toxic CO2-rich atmosphere and runaway greenhouse effect. In research partly conducted at the U.S. Department of Energy’s Advanced Photon Source (APS), scientists revealed that Earth’s early atmosphere resembled that found on Venus today (97% carbon dioxide [CO2], 3% nitrogen [N2], and some water vapor), but then evolved differently due to its larger mass and greater distance from the Sun. This work, published in the journal Science Advances, provides a better understanding of the early evolution of Earth’s atmosphere, and may help scientists identify planets elsewhere in the galaxy that may host living organisms.

The planets of our solar system formed from the gravitational pull of cosmic materials orbiting the proto-Sun. As the bodies grew larger, they collided to first form planetesimals (minute planets that could or did come together with many others under gravitation to form a planet) and then collide to form early proto-planets (moon-sized planet “embryos”). About 4.5 billion years ago, it’s hypothesized that a Mars-sized planetary embryo struck the proto-Earth. Some of the material that was flung outward from this collision orbited Earth and eventually coalesced to form the Moon. That collision likely blew Earth’s earliest atmosphere into space. The massive release of energy from the explosion also melted the planet, leaving its surface covered by a magma ocean, made mostly of peridotite, a silicate rock composed largely of the iron (Fe)- and magnesium-rich minerals olivine and pyroxene. Peridotite is thought to best reflect the makeup of the Earth’s mantle and these samples of the Earth’s mantle are often transported to the surface in magmas that are extruded during volcanic eruptions or physically by tectonic processes.

As the magma ocean simmered, hydrogen, carbon, oxygen, and nitrogen gases bubbled up to form a new second atmosphere. Eventually, Earth cooled further and the water vapor condensed to form the oceans. The oceans absorbed CO2, some of which was incorporated into the oceanic crust and subducted into the upper mantle. The loss of atmospheric CO2 reduced greenhouse warming, which made the planet hospitable to early life.

To reveal the composition of this atmosphere, it is necessary to understand the behavior of oxygen in the magma ocean. The oxidation state of iron in the minerals that crystallized from the magma ocean reveals which gases best represent this primordial atmosphere. When oxygen is abundant, iron bonds in a 3:2 ratio (Fe2O3) and produces an atmosphere rich in water vapor, CO2, and N2. Less oxygen leads to iron binding in a 1:1 ratio (FeO) and results in an atmosphere rich in H2, ammonia, and carbon monoxide gases. The actual oxygen:iron ratio in natural mantle peridotites lies in between the two values.

For this paper, researchers from the Institute of Geochemistry and Petrology (Switzerland), the Institut de Physique du Globe de Paris (France), and the Australian National University determined the composition of Earth’s early atmosphere by performing extremely difficult experiments. First, they melted peridotite powder in a sealed chamber at a temperature equal to the primordial magma ocean’s surface of 1900o C. Next, they pushed streams of different gas mixtures around the molten peridotite bead, causing it to hover atop the gas jet. The result was a miniature molten Earth floating in a tiny atmosphere. This technique—aerodynamic levitation—enables extremely rapid quenching to best preserve the melt composition. The team then determined Fe3+/Fe2+ in the glasses using Fe K-edge X-ray absorption near-edge structure (XANES) spectroscopy. With colleagues from The University of Chicago, the researchers collected these spectra at the GeoSoilEnviroCARS beamline 13-ID-E at the APS. Only one gas composition—rich in carbon dioxide with a little nitrogen—recreated the ratio of iron oxides found in mantle peridotites.

This research presents two important conclusions. First, although Earth, Venus, and Mars once had similar atmospheres, the differences in their current atmospheres are due to their different masses and distances from the Sun. Venus, closest to the Sun, never cooled enough to condense water vapor and form oceans, leaving its CO2 in the atmosphere and resulting in a runaway greenhouse effect. Mars’ lower gravity resulted in lower atmospheric pressure. The water that it has is stored in its polar ice caps. Second, the famous 1952 Miller-Urey experiments (which found that organic molecules could be spontaneously produced under reducing conditions thought to resemble those of early Earth) do not reflect conditions on Earth when life originated. Scientists now know that the gas mixture used would have been more accurate with CO2 and N2 instead of methane and ammonia. — Dana Desonie

P.A.S. acknowledges support from SNSF Ambizione Fellowship grant no. 180025 and H.S.O. on IPGP visiting professorship in September 2017. A.D.B. and H.S.O. acknowledge support from ARC Laureate Fellowship no. FL130100066. Parts of this work were supported by the UnivEarthS Labex program (ANR-10-LABX-0023 and ANR-11-IDEX-0005-02) and IPGP multidisciplinary program PARI (Paris–IdF region SESAME Grant no. 12015908). GeoSoilEnviroCARS is supported by the National Science Foundation–Earth Sciences (EAR: 1634415). This research used resources of the Advanced Photon Source, a U.S. DOE Office of Science User Facility operated for the DOE Office of Science by Argonne National Laboratory under contract no. DE-AC02-06CH11357.