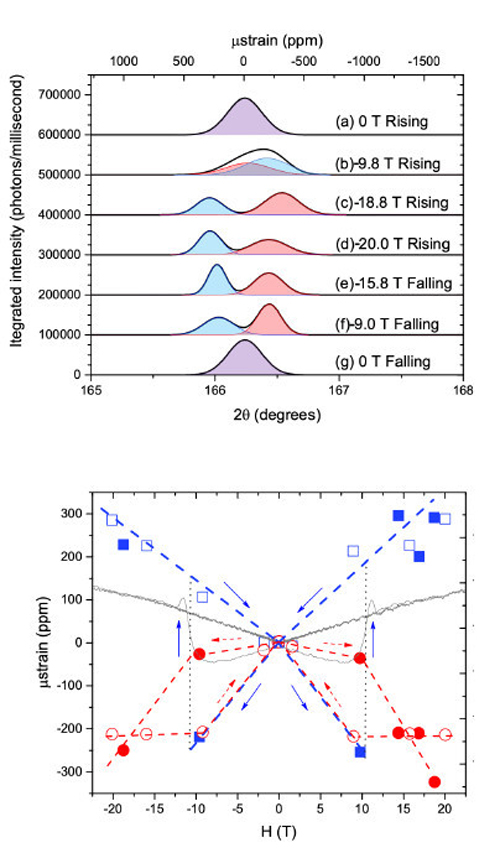 Only a few crystalline compounds are known to exhibit the rare phenomenon of piezomagnetism. Squeezing or stretching a piezomagnetic material alters its internal magnetic ordering and creates a magnetic moment. Conversely, exposing the material to a magnetic field causes it to expand or contract. Although previous studies had examined piezomagnetism in uranium dioxide (UO2) and a few other crystalline materials, none had observed the detailed crystallographic changes that occur during the transition to piezomagnetic behavior. In a first-of-its-kind experiment, scientists have now used x-ray diffraction to directly measure the microscopic distortions in crystalline UO2 associated with piezomagnetism induced by pulsed magnetic fields. The x-ray diffraction measurements were gathered at the U.S. Department of Energy’s Advanced Photon Source (APS) at Argonne National Laboratory. The experimental results provide new information on the complex relationship between piezomagnetism and crystallographic structure, which will aid in clarifying the origins of this obscure phenomenon. It is hoped that these insights will eventually allow scientists to control piezomagnetism in new ways, for instance by applying an electric field to materials with strong piezomagnetic properties. Such control could lead to new types of sensors and other electronic devices. The study was published in Nature's Communications Materials.

Piezomagnetism is analogous to the better-known phenomenon of piezoelectricity. A piezoelectric material produces electricity when deformed; applying electricity to the material causes it to change shape. Piezoelectric behavior was fully confirmed in the 1880s via experimental and theoretical studies. A broad range of compounds are known piezoelectrics, including quartz, topaz, compounds called ferroelectrics, and even cane sugar. Piezoelectrics are currently used in a myriad of industrial and consumer applications, ranging from ultrasound machines to solid-state lighters.

Piezomagnetism, in contrast, was only fully confirmed in the 1960s and its widespread application awaits development. The biggest obstacle lies in the uncertainty surrounding its origins. While multiple experiments have shed light on piezomagnetic behavior, no firm theoretical framework explaining its underlying mechanism has been established.

To obtain new information about the factors responsible for piezomagnetism in uranium dioxide, the multinational, multi-institution team of researchers employed synchrotron x-rays at the X-ray Science Division Magnetic Materials Group’s 6-ID-C x-ray beamline at the APS to view changes at the unit-cell level of a high quality UO2 crystal. The powerful x-rays from the Office of Science’s APS were complimented by an advanced prototype x-ray detector―a compound-type mixed-mode pixel array detector with a silicon sensor―which together provided a series of highly precise images of the crystal’s diffraction peaks, each recorded within a millisecond time frame. Additional structural characterization in zero-field using XRD was carried on an HPCAT-XSD 16-BM-D beamline.

As the magnetic field grew from zero to maximum strength, the crystalline lattice containing one domain expanded while the other domain's lattice shrank. When the field was suddenly reversed, the domain that had previously expanded began to contract, while the other domain shifted from shrinking to expanding. Plotting the expansion and contraction of the domains in relation to a back-and-forth reversal of magnetic field direction yields a so-called butterfly pattern (see bottom illustration of Fig. 1). The x-ray diffraction setup utilizing back-reflection geometry designed for this study was essential in providing the researchers the first molecular-scale data of dynamic piezomagnetic behavior. Although any observations of magnetic domains were beyond the reach of this scattering study due to pulsed nature of magnetic fields, future availability of high-field DC magnets at user facilities will usher in direct investigations of such domains.

The two observed piezomagnetic domains persisted throughout the experiment. This seems somewhat puzzling as one might suspect that the two domains would irreversibly merge together. The researchers have proposed several mechanisms to explain the observed behavior. For instance, sensitivity of the phenomena to small stresses induced within the crystal, such as from gluing the UO2 crystal to its substrate, might support the creation and maintenance of the domains. Also, electric multipoles that can arise in uranium dioxide may also have contributed to the observed complex piezomagnetic behavior. This later possibility suggests that piezomagnetism in some materials might be controlled through applied electric fields.  ― Philip Koth

Work by D. A., K. S., and K.G. was supported by the U.S. Department of Energy (DOE) Early Career Research Program under the project “Actinide materials under extreme conditions.” The high-field pulsed magnet and a choke coil were installed at the Advanced Photon Source through a partnership with the International Collaboration Center at the Institute for Materials Research (ICC-IMR) and Global Institute for Materials Research Tohoku (GIMRT) at Tohoku University. Detector research in S.G’s laboratory is supported by DOE grant DE-SC0017631. JPCR’s research at CHESS/CHEXS was supported by the National Science Foundation under awards DMR-1332208 and DMR-1829070. This research used resources of the Advanced Photon Source, a U.S. DOE Office of Science User Facility operated for the DOE Office of Science by Argonne National Laboratory under Contract No. DE-AC02-06CH11357.