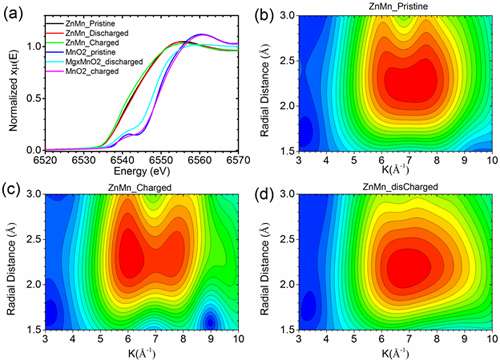 Lithium-ion batteries are critical for modern life, from powering our laptops and cell phones to those new holiday toys. But there is a safety risk – the batteries can catch fire. Zinc-based aqueous batteries avoid the fire hazard by using a water-based electrolyte instead of the conventional chemical solvent. However, uncontrolled dendrite growth limits their ability to provide the high performance and long life needed for practical applications. Now scientists who employed a number of research techniques including work at the U.S. Department of Energy’s Advanced Photon Source (APS) have reported in Nature Communications that a new three-dimensional (3-D) zinc-manganese nano-alloy anode has overcome the limitations, resulting in a stable, high-performance, dendrite-free aqueous battery using seawater as the electrolyte.

Yang Yang, corresponding author for the work and an assistant professor of Nanoscience Technology Center at the University of Central Florida (UCF), said the discovery offers promise for energy storage and other applications, including electric vehicles and electric grids.

“Aqueous electrolytes are cost-competitive, environmentally benign, capable of fast charging and high power densities, and highly tolerant of mishandling” he said. “Our zinc-based aqueous battery therefore is low-cost and stable, and has high energy density, which has the potential for large-scale manufacturing.”

Xiaonan Shan, co-corresponding author of the work and an assistant professor of Electrical and Computer Engineering at the University of Houston (UH), developed an in situ optical visualization technique, allowing the collaborative team to directly observe the reaction dynamics on the anode in real time. “This platform provides us with the capability to directly image the electrode reaction dynamics in situ,” Shan said. “This important information provides direct evidence and visualization of the reaction kinetics and helps us to understand phenomena that could not be easily accessed previously.”

The anode is the electrode which releases current from a battery, while electrolytes are the medium through which the ionic charge flows between the cathode and anode. Using seawater as the electrolyte rather than highly purified water offers another avenue for lowering battery cost.

Traditional anode materials used in aqueous batteries have been prone to dendrites, tiny growths that can cause the battery to lose power. The team proposed and demonstrated a strategy to efficiently minimize and suppress dendrite formation in aqueous systems by controlling surface reaction thermodynamics with a zinc alloy and reaction kinetics by a three-dimensional structure.

To confirmed how the 3-D alloy was functioning in the battery, synchrotron x-ray characterizations play a vital role. Zhenxing Feng, co-corresponding author of the work and an assistant professor of Chemical Engineering at Oregon State University (OSU), together with the beamline scientist Hua Zhou at the APS, used x-ray absorption spectroscopy at the X-ray Science Division Chemical & Materials Science Group’s beamline 12-BM at the Advanced Photon Source to track the atomic and chemical changes of the anode in different operation stages. “Our theoretical and experimental studies proved that the 3D alloy anode has unprecedented interfacial stability, achieved by a favorable diffusion channel of zinc on the alloy surface,” Feng said. “The concept demonstrated in this collaborative work is likely to bring a paradigm shift in the design of high-performance alloy anodes for aqueous and non-aqueous batteries, revolutionizing the battery industry.”

Researchers at UCF, UH and OSU are currently investigating other metal alloys, in addition to the zinc-manganese alloy.

This work was primarily supported by the National Science Foundation under grant no. CBET-1949840, CMMI-1851674, CBET-1949870, CBET-2016192, and the startup grant from the University of Central Florida (UCF). H.T. thanks for the Preeminent Postdoctoral Program (P3) at UCF. Z.F. thanks for the startup funding from Oregon State University. TEM and data analysis were supported by the U.S. Department of Energy (DOE) Office of Science-Basic Energy Sciences, and Early Career Research Program under award #68278. A portion of the research was performed using EMSL, a DOE User Facility sponsored by the Office of Biological and Environmental Research and located at the Pacific Northwest National Laboratory. This research used resources of the Advanced Photon Source, a U.S. DOE Office of Science User Facility operated for the DOE Office of Science by Argonne National Laboratory under Contract DE-AC02–06CH11357.

©2021 University of Houston. All rights reserved.