Putting the Starch in Tissue-Like Materials 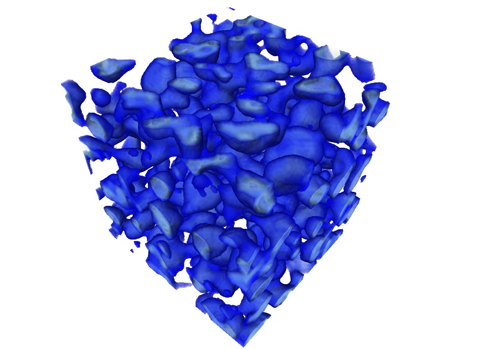 Biological tissues have amazing properties. They can self-heal, identify chemicals, choose which chemicals to allow inside a barrier and which to exclude, they are flexible, and they often have strength that varies depending on the direction of the force applied. Replicating all of these properties in a single synthetic material has proven very difficult. But now, researchers have shown that hydrated starch granules mixed into conventional hydrogels can create tissue-like materials that behave in ways very similar to the extra-cellular matrices in biological tissues. These tissue-like materials can produce unique mechanical properties such as mechanical heterogeneity, trainability, memory, and impact absorption, which are not observed in traditional materials. The scientists in this study used the U.S. Department of Energy's Advanced Photon Source (APS) to illuminate the mechanical performance attributed to the synergistic effect at multiple length scales and published their results in the journal Matter. Materials designed along the same lines as the starch-hydrogel could someday be used to create soft robots and biomedical implants with functionality beyond that of natural systems.

Extracellular matrices are critical to our body’s functioning. The fate of a young cell is often determined by the extra cellular matrix supporting it. The matrix that creates the heart is very different from the matrices that creates the brain or a bone, for example. The mechanical properties, chemical transfer and surface functionalities of biological extracellular matrices are complex and difficult to mimic artificially. Many previous attempts to create artificial matrices have failed. In the past, the multiscale characterization for the composite materials usually happens on battery materials.

To better mimic the  mechanical properties of biological tissue instead of conventional biomaterials, the team of researchers from the University of Chicago, Northwestern University, Brookhaven National Laboratory, and Argonne National Laboratory report their success at making a remarkable artificial tissue-like material with properties similar to an extracellular matrix with cells, using hydrogel and wheat starch.

Starch is a polymer carbohydrate, essentially a chain of sugar molecules strung together. Polysaccharides ("many sugars"), as starch molecules are often called, are good at bonding to many other molecules, especially water. To make their material, the researchers mixed round granules of starch around 11 micrometers in diameter into water and then added acrylamide and alginate, two common ingredients of hydrogels. They let the mixture gel, and then began to study its properties. They found that the hydrogel acted like an extracellular matrix supporting "cells" of wheat starch (Fig. 1.)

The hydrogel-starch material has several advantages compared to other polymers that have been tried in the quest to replicate biological materials. The scale of the starch granules is similar to the scale of living cells. Starch (polysaccharide) chemistry has similarities to the chemistry on the surface of biological cells, which can reach out and grab chemicals of many different sorts, and then either pull them into the cell or exclude them. And most importantly for the researcher’s project, the starch-hydrogel’s mechanical properties are very similar to living extracellular matrices.

The structure of biological tissue consists of cell granular and extracellular matrix (ECM). The interface between cell and ECM form a strong focal adhesion. Due to the synergistic cooperation between cell and ECM, biological systems show promising dynamic responsiveness, such as impact absorption, mechanical heterogeneity, and trainability. In this work, the researchers investigated the roles of granules and the surround matrix on the dynamic response of hybrid systems. To probe this, the team incorporated the starch granules in synthetic hydrogels to mimic the biological tissues. Interestingly, the scale of the starch granule is like that of the cell; the starch granules could also form strong interactions with the synthetic hydrogels due to the unique surface chemistry of the starch granule.

First, it was possible to coax the starch granules to align in a preferred direction, much like muscle tissue. Alignment makes the material tougher in response to stress from one direction than from others. Besides that, the researchers also discovered the starch hybrid materials can be trained under loading the various strains, which is also similar to muscle tissue. The material was also self-healing, thanks to the ease with which hydrogen bonds pull apart and then reform. The team also found that all the transitions happened at strain=100% for the first stretch, including modulus jumping, energy dissipation, separation, and mesoscale mechanical heterogeneity, indicating a training threshold of mechanical strain=100% for the first stretch. This training phenomenon is also observed in the microtube system.

But the starch-hydrogel also had a surprising feature—even after it had been stretched to align the starch granules in a preferred direction, the granules still ‘remembered’ their former random alignment, and would snap back into it if the material was stretched perpendicularly to the alignment direction. This type of memory has rarely been observed in conventional designed biomaterials, but it does happen in natural biological materials such as the actin filaments in muscles.

To ensure that memory property was really acting the way they thought it was, the team used the X-ray Science Division (XSD) Time Resolved Research Group's x-ray beamline 7-ID-B at the APS (an Office of Science user facility at Argonne) to perform x-ray speckle correlation spectroscopy. Beamline 7-ID-B allowed them to watch the starch-hydrogel as it moved, allowing them to see dynamically how the particles realigned under various different stresses. The instantaneous images allowed the researchers to see exactly how fast, or how slow, the particles froze in certain states. The ability to study dynamic effects in the material was very valuable in understanding this soft substance. The team also used the XSD Imaging Group's beamline 2-BM at the APS to perform x-ray tomography and do three-dimensional reconstructions of the distribution of starch granules while stretching. This allowed the researchers to precisely characterize the relationship between the mesoscale alignment of starch and the macroscale mechanical performance of the material. Nano-computed tomography measurements were carried out with the transmission x-ray microscope at the FXI 18-ID beamline of the National Synchrotron Light Source II at Brookhaven National Laboratory.

Although starch and hydrogels are both relatively common materials, combining them into a system has rarely been done before, and there is much to explore. The team intends to test the material’s capabilities next by building a soft, humanized robots.  - Kim Krieger

This work was supported by the U.S. Ofﬁce of Naval Research (ONR YIP, N000141612530; PECASE, N000141612958) and the National Science Foundation (NSF MRSEC, DMR 1420709). The work made use of the BioCryo facility of Northwestern University’s NUANCE Center, which received support from the Soft and Hybrid Nanotechnology Experimental Resource (NSF ECCS-1542205); the Materials Research Science and Engineering Centers (MRSEC) program (NSF DMR-1720139) at the Materials Research Center; the International Institute for Nanotechnology (IIN); and the State of Illinois, through the IIN. It also made use of the CryoCluster equipment, which received support from the Major Research Instrumentation program (NSF DMR-1229693). This research used resources at the National Synchrotron Light Source II, a U.S. Department of Energy (DOE) Ofﬁce of Science User Facility operated for the DOE Ofﬁce of Science by Brookhaven National Laboratory under contract no. DE-AC02-98CH10886. This research used resources of the Advanced Photon Source, a U.S. DOE Office of Science User Facility operated for the DOE Office of Science by the Argonne National Laboratory under contract no. DE-AC02-06CH11357.