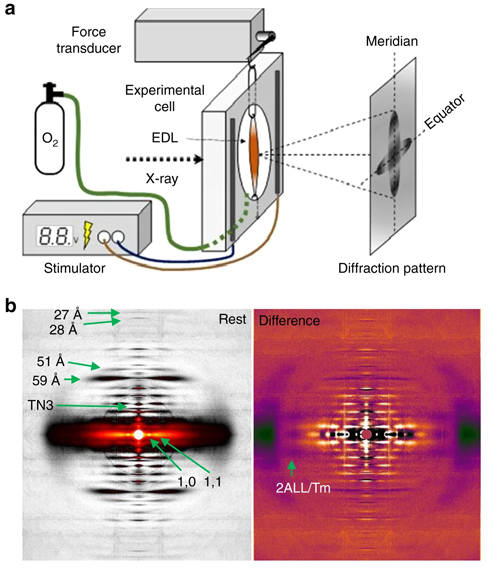 The gene NEB encodes for the skeletal muscle protein nebulin. Mutations in NEB cause the disease nemaline myopathy, which is one of the more common inherited myopathies. Patients with this muscle disorder have muscle weakness in multiple different parts of their body and can also experience difficulties with feeding or breathing. Currently, there is no cure for nemaline myopathy and treatment options are limited. Therefore, there is a need to better understand this disease and design new therapeutics that can improve patient quality of life. In a recent Nature Communications article, a team of researchers from the University of Arizona working to provide new insights into the pathogenesis of this skeletal muscle disorder report a new mouse model of nemaline myopathy that exhibits similar symptoms to those identified in human patients. An important part of this work utilized x-ray diffraction data collected at the U.S. Department of Energy’s (DOE’s) Advanced Photon Source (APS). The diffraction data provide new insights into how mutations of NEB alter the molecular structure of skeletal muscles. The findings from the study are highly impactful because they significantly increase our understanding of how mutations in the gene NEB cause nemaline myopathy. Importantly, the new mouse model of this disease can be used to test future therapeutics. Future studies are warranted to determine if interventions can relieve disease symptoms in these mice. If successful, such therapeutics could be used for improving the quality of life in human patients.

Nemaline myopathy is a rare muscle disease that can be caused by mutations in the gene NEB. Over 240 different disease-causing mutations in NEB have been identified in conjunction with nemaline myopathy, with the majority of patients having two different mutations in the gene NEB. Patients experience symptoms ranging from muscle weakness in the arms, legs, face, and neck to difficulties with feeding or breathing. Despite these serious symptoms, there is currently no cure and the available treatment options are limited.

From a functional standpoint, NEB encodes for the protein Nebulin, which is found in the sarcomere of skeletal muscle. Unlike cardiac and smooth muscle which undergo involuntary muscle contractions, skeletal muscles are under voluntary control and are responsible for carrying out bodily movements. For example, someone performing bicep curls in the gym is actively controlling and exercising their biceps using skeletal muscles.

Using the new mouse model, the team examined how these two mutations impacted the structure of the muscle on a molecular level. A key part of this work was performed in collaboration with Illinois Institute of Technology scientists at the Biophysics Collaborative Access Team (Bio-CAT) 18-ID-D x-ray beamline at the APS (the APS is an Office of Science user facility at Argonne National Laboratory). X-ray diffraction patterns collected at beamline 18-ID were used to identify molecular structures altered in the mice (Fig. 1). The research team found that the sarcomeres in the new strain of genetically modified mice were disorganized. One prominent finding was that actin filaments―which play an important role in muscle contraction―were twisted and have a larger radius when compared to the control.  ― Stephen Taylor