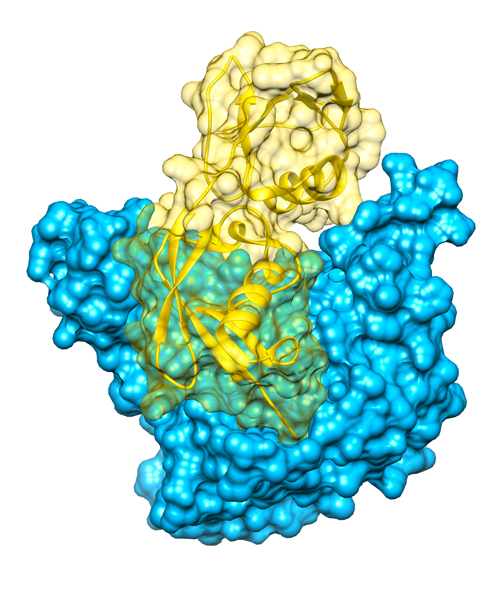 Before there was SARS-CoV2, the coronavirus responsible for the COVID-19 global pandemic, there was MERS-CoV, the Middle East Respiratory Syndrome coronavirus. MERS-CoV, also known as camel flu, is fatal in about a third of humans with co-morbidities who contract it. It is still in circulation and there is no vaccine. A team of scientists from Purdue University, in research that predated the current coronavirus outbreak, targeted a particular protein from the MERS virus called the papain-like protease (PLpro) as part of a potential strategy for vaccine development. Using x-ray data collected at the U.S. Department of Energy’s Advanced Photon Source (APS), the researchers solved a high-resolution structure of the viral protein in complex with the human protein interferon-stimulated gene 15 (ISG-15). This information allowed the team to develop a series of PLpro variants to help unravel how the virus suppresses innate immunity.

ISG-15 is a small antiviral protein that looks a bit like ubiquitin, a ubiquitous regulatory protein in eukaryotes. Upon viral infection, interferons promote the rapid production of ISG-15 to combat the pathogen. Though its mechanism is still under investigation, scientists have suggested that, in a process called ISGlyation, ISG-15 is attached to newly synthesized viral proteins, gumming up the works and blocking viral activity. But coronaviruses and other viruses have their own countermeasures, enlisting deISGlyating enzymes to remove the ISG tags. PLpro is one such protease, but the enzyme has other activities as well, such as deubiquitination, as well as its normal function, which is to cleave the viral polyprotein. Due to its multifunctional nature, scientists have struggled to disentangle the role of PLpro in the suppression of the immune response.

To better understand the structural basis for how the PLpro recognizes and cleaves ISG-15 versus ubiquitin, the research team from Purdue University co-crystallized the viral protein with the ISG-15 protein and solved the structure to a resolution of 2.3 angstroms (Fig. 1) using high-brightness APS x-rays at beamline 21-ID-D of the Life Sciences Collaborative Access Team (the APS is an Office of Science user facility at Argonne National Laboratory). They found that the MERS-CoV PLpro only interacts with the C-terminal domain of ISG-15. The researchers superimposed the PLpro-ISG-15 structure to one previously solved of PLpro in complex with ubiquitin. They found a number of differences, and used this information in the next phase of their experiment: the production of mutant PLpro variants.

These mutants will provide critical information to help scientists figure out the importance of PLpro's various enzymatic roles on MERS-CoV pathogenesis and replication.

This study is just the first step, though. The hope is that these mutants will facilitate studies that allow scientists to infect cells with the mutant viruses in the laboratory and see what happens when a MERS virus loses its ability to deISGlyate or deubiquitante or both. The idea is that if one of these mutant strains has lost its ability to be dangerous, then it becomes a live attenuated vaccine candidate.  Such vaccines consist of a weakened form of a virus that, because they are so similar to the natural virus, trigger a strong and lasting immune response.

This general approach is applicable beyond MERS-CoV, and may hold promise in the fight against other members of the coronavirus family, including SARS-CoV-2, which causes COVID-19.  ― Erika Gebel Berg

This research was supported by the National Institute of Allergy and Infectious Disease (NIAID) of the National Institutes of Health (NIH) under award number R01AI085089. A.D.M. also wishes to also acknowledge partial support from the Center for Structural Genomics of Infectious Disease (NIH-NIAID Contract HHSN272201700060C) and the Walther Cancer Foundation. Use of the Life Sciences Collaborative Access Team was supported by the Michigan Economic Development Corporation and the Michigan Technology Tri-Corridor (Grant 085P1000817). This research used resources of the Advanced Photon Source, a U.S. Department of Energy (DOE) Ofﬁce of Science User Facility operated for the DOE Ofﬁce of Science by Argonne National Laboratory under Contract No. DE-AC02-06CH11357. Extraordinary Advanced Photon Source operations were supported in part by the DOE Office of Science through the National Virtual Biotechnology Laboratory, a consortium of DOE national laboratories focused on response to COVID-19, with funding provided by the Coronavirus CARES Act.