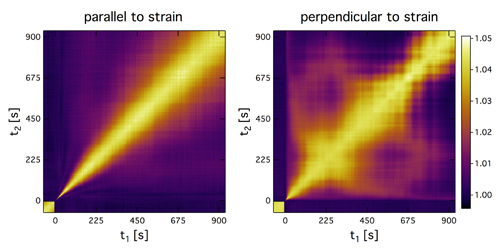 When familiar solids like metal, wood, or rubber are deformed, a consistent restoring force appears that pushes back against the deformation. Such materials are called elastic solids. In contrast, amorphous solids respond quite differently when deformed. Amorphous solids are substances like pastes, gels, and glasses that lack any long-range crystalline structure. When these materials are subjected to deformation (strain) the restoring force (stress) does not remain constant but slowly decreases over time, a process called stress relaxation. Although such behavior has been extensively studied at the macroscopic scale, investigations of the microscopic phenomena driving the large-scale behavior have lagged behind. In response, scientists recently performed first-of-their-kind experiments that tracked particle motion in a soft glass using x-ray photon correlation spectroscopy (XPCS) performed at the U.S. Department of Energy’s Advanced Photon Source (APS), while simultaneously observing how stress and strain varied with time. These complementary measurements revealed that following deformation of the soft glass, a persistent, microscopic backward flow was observed along with intermittent surges of particle motion perpendicular to the back flow. These experimental results may guide new strategies for processing amorphous solids and could also provide new theoretical insights into the factors underlying their dynamic behavior.

The amorphous solid examined in this research was a model system referred to as a “soft glass,” which consisted of densely packed silica (silicon dioxide) nanospheres in water. The surfaces of the nanospheres were charged, causing them to repel one another and become jammed in a static, disordered configuration. Macroscopically, the soft glass had a consistency similar to mayonnaise.

To examine the deformation and flow behavior of liquids and amorphous solids, scientists typically employ specialized laboratory equipment such as rheometers. This study, by researchers from Johns Hopkins University, the University of Illinois Urbana-Champaign, and the University of Ottawa (Canada) utilized a rheometer that incorporated a device called a Couette cell, which consisted of two coaxial cylinders. In a Couette cell a sample is placed in the gap between the walls of the cylinders and then the inner cylinder is rotated at precise speeds. The rotation introduces a tangential stress, or shearing force, across the sample's surface, which deforms it.

The soft glass was placed in the Couette cell and subjected to sudden deformations after which the torque needed to maintain the deformation was monitored as a function of time. More specifically, the strain (deformation) in the soft glass was increased stepwise from zero up to a maximum predetermined value and then held constant, and the resulting stress (force) needed to maintain that maximum strain was measured. The required stress was initially large but slowly decreased over time.

The innovative aspect of this study entailed using the highly-intense synchrotron x-rays produced at the APS to view the motion of the glassy nanospheres during simultaneous operation of the rheometer. A series of experiments was performed by the team and a colleague from Argonne National Laboratory  over two days, employing the X-ray Science Division Dynamics & Structure Group’s 8-ID-I x-ray beamline at the APS, an Office of Science user facility at Argonne National Laboratory. Each experiment lasted 1000 seconds, or nearly 17 minutes. To track movement in the soft glass, XPCS images in the form of time varying speckle patterns were captured 10 times per second, resulting in a total of 10,000 x-ray images per experiment.

The XPCS measured two types of motion in the soft glass during stress relaxation. One component to the motion was parallel to the cylinder wall and in the direction opposite to the initial deformation, hence its description as a back flow. This motion was captured by smoothly-varying XPCS correlation functions, as illustrated in the left panel of Fig. 1. The researchers were surprised at the persistent nature of the back flow, which steadily slowed over time but lasted throughout the entire duration of the experiments. The back flow was intimately linked with the rate of stress relaxation in the soft glass, and its detailed behavior was unexpected in light of previous computer simulations used to predict soft glass dynamics.

The other observed motion consisted of intermittent surges, or avalanches, perpendicular to the back flow. This perpendicular orientation is called the vorticity direction. Irregular changes in the XPCS correlation functions can highlight such intermittent motion, as illustrated in the right panel of Fig. 1. The researchers attributed these surges to coordinated motion of the jammed nanospheres in the vorticity direction to accommodate the back flow. The researchers suspect that the perpendicular flow observed in the soft glass may likewise occur in many amorphous solids.

The unique experimental setup utilized in this study will undoubtedly prove useful in future studies to uncover the microscopic mechanisms of deformation and flow in a wide variety of soft materials. The APS Upgrade would boost the coherent flux by 100 times and further enable the imaging of speckles to yield transformational insight into such studies.  ― Philip Koth

Funding was provided by the National Science Foundation (CBET-1804721) and the Natural Sciences and Engineering Research Council of Canada Discovery grant program. This research used resources of the Advanced Photon Source and the Center for Nanoscale Materials, U.S. Department of Energy (DOE) Ofﬁce of Science User Facilities operated for the DOE Ofﬁce of Science by Argonne National Laboratory under Contract No. DE-AC02-06CH11357.