A Greater Understanding of Color Origins in Low-Power Electronic Displays 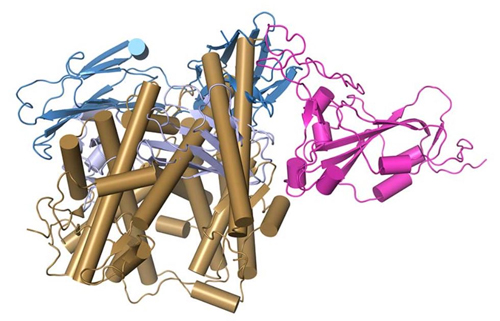 Today’s low-power, electronic ink displays such as e-book readers produce text through a process called electrophoretic deposition (EPD). Each pixel of the display contains charged black and white particles suspended in a liquid solvent. These particles are moved by electrodes embedded in the devices, causing particles to stick to the electrodes to form words or images. The displays change when the electrical field of the pixels changes. In most industrial EPD applications, like painting cars or coating medical devices, the particles are meant to permanently stick, even after the electrical field is removed. However, at the U.S. Department of Energy’s (DOE’s) Lawrence Livermore National Laboratory (LLNL), researchers are working on perfecting an emerging approach called reversible electrophoretic deposition, in which nanoparticles re-suspend in the solvent when scientists stop applying electricity. Using a variety of research tools, including the DOE’s Advanced Photon Source at Argonne National Laboratory, LLNL is pursuing the technology to create high-contrast, wearable displays that can self-erase and be powered by human movement alone, as well as chameleon-like dynamic camouflage that can quickly change color depending on the environment, among other applications.

In LLNL’s reversible EPD display, researchers explained, the color change is determined by the spacing between nanoparticles in the electric field. When an electrical field is applied, the particles (containing an iron oxide core) move closer together, forming crystals that appear purple. When the field is turned off, the particles move farther apart and appear green. Because the process is transient and leaves no permanent particle deposit, there was no way for LLNL researchers to measure and understand the color changes as they happened through any previously developed technique.

To remedy this, researchers from LLNL and the University of California, Davis, turned to the synchrotron x-ray scattering technique to examine how nanoparticle arrangement affects color while the display is in operation, and for the first time, performed experimental validation of a model of the EPD process capable of accurately predicting particle spacing given a certain applied voltage. The work was published in Physical Review Materials, where it was recognized as an Editors’ Suggestion, signifying its high degree of interest, importance, or clarity.

LLNL scientists said the research improves basic knowledge of how distances between nanoparticles impact color changes in EPD displays and could have a significant impact on the broader scientific community.

“The color our display produces is directly related to spacing between particles, so we really needed to understand that spacing to relate it to the color we’re getting,” said principal investigator and LLNL engineer Andy Pascall. “Now, we’ve done the experiment and actually directly observed interparticle spacing, and we’ve tied that back to the observed color. We also now have a theory about how changing various aspects of the system would change the color.”

Using the powerful x-rays generated by the Advanced Photon Source, the LLNL team was able to perform small angle x-ray scattering at the X-ray Science Division x-ray beamline 9-ID-C on a specialized EPD cell, allowing the team to collect data on nanoparticle spacing while electrical fields were applied. The scattering tool also provided the team with data on the size, shape and shell ratio of the particles, confirming information gathered previously from scanning electron microscopy images. Researchers collected video of the displays as they changed color and recorded the visible light spectrum to see how the colors shifted due to voltage.

“One thing that had always been conjectured but never observed in this type of EPD display was, ‘if the particles are actually changing distance, is that where the colors are coming from?’ We never had a direct measurement of that change before,” Pascall said. “We basically measured the same thing in two completely independent experiments. In this case we were able to confirm that yes, you get the same answer whether you measure with x-rays and look at particle scattering, or light scattering in the visible spectrum, which is kind of amazing.”

Pascall said the experiments also answered a question that LLNL scientists had long had about why colors in the displays didn’t change after they applied more than about four volts to the particles. The x-ray scattering data showed that the particles physically touch at that voltage, meaning they would not change further, no matter how much more voltage was applied.

The experimental results were compared to a model of the EPD process originally developed by LLNL computational engineer Brian Giera in 2017. Giera had been refining the model with funding from the Mercator Fellowship program, adapting it to be less computationally expensive and able to run on a standard laptop. With the model, the team was able to track how the nanoparticles changed position, assembled and spaced apart under different electrical fields, achieving quantitative agreement with the beamline experiments.

“We developed a sufficiently complex model that accurately describes the system without requiring the world-class computing resources that only Livermore has access to,” Giera said. “It can not only produce high-quality results without the use of a supercomputer, but it also confirmed these assumptions we’ve had about these EPD display systems. We all thought we knew why this color change was happening, but this set of measurements and modeling proved it. For me, this is really a career highlight.”

Giera said because the experimentally verified model describes the general EPD process, it could provide the scientific community with a fundamental understanding of EPD across a broad range of applications. Armed with the new insights, LLNL researchers said they can begin looking beyond the nanoparticles they are currently experimenting with to other materials and advance exploration into national security-related projects. Projects could include wearable displays such as smartwatches or “smart skin” (ultrathin displays that attach to the skin), and electronic camouflage that could cover an entire vehicle or be integrated into military uniforms.

“Now that we have a diagnostic we can trust, we can start to explore how changing the particle system will affect display color,” Pascall said. “We can take those experiments to the beamline and see how those changes affect particle spacing. Also, a lot of people don’t have access to a beamline, so the fact that we have created a tie between the color we’re observing and spacing will be valuable outside the Lab.”