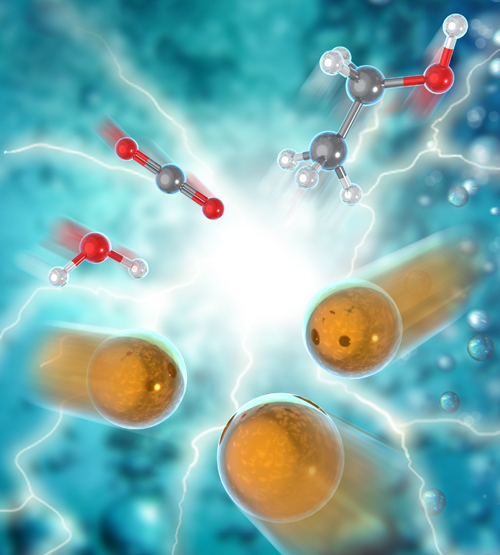 Converting carbon dioxide and water into ethanol efficiently and cheaply could reduce the amount of CO2 that is released into the atmosphere. So researchers seek to develop new electrocatalysts to assist with this chemical reaction, a technological leap that could lead to new methods for converting CO2 into a wide array of value-added chemicals. By using renewable energy sources to power the reactions, this technology will reduce atmospheric greenhouse gas emissions and bring us one big step closer to a circular economy. For this work, published in the journal Nature Energy, the researchers designed a novel catalyst to break down CO2 with maximum efficiency. These catalysts have a supporting structure of carbon with a group of copper atoms. The structural characterization was performed using the U.S. Department of Energy’s Advanced Photon Source (APS) and Center for Nanoscale Materials (CNM).

Carbon dioxide is abundant and, as an atmospheric greenhouse gas, helps to keep Earth warm. One goal of forward thinkers is creating a circular economy, in which waste is turned into useful products and the use of new resources is minimal. Instead of being lost to the atmosphere, where it will increase warming, CO2 can be transformed into other hydrocarbons, such as ethanol, which in the U.S. is mixed with gasoline to raise the octane rating and reduce carbon emissions. Ethanol also is an important intermediate product in the chemical, pharmaceutical, and cosmetics industries.

However, CO2 molecules are extremely stable, so breaking them apart is energy intensive and costly. For CO2 breakdown to be more efficient, researchers are searching for new catalysts, which increase the rate of chemical reactions with no permanent change to its own chemistry and are commonly used in industrial processes, including in the manufacture of more than 80% of products.

In these experiments, which were designed to investigate the local environment around the copper atoms in the carbon-supported copper samples, the catalyst was stable over an extended operation at low voltage. Using the high photon flux of the x-ray beams at the X-ray Science Division 12-BM and 20-BM bending magnet beamlines of the APS (an Office of Science user facility at Argonne National Laboratory) to perform x-ray absorption spectroscopy with operando x-ray absorption near-edge structure and extended x-ray absorption fine structure experiments, the researchers observed structural changes in the catalyst. The dispersed copper atoms became energized and formed tiny clusters of three copper atoms under the electrochemical potential, a reaction that was reversible. The carbon-supported copper catalysts broke down the CO2 and water molecules, then reassembled them into ethanol (CH3CH2OH) (Fig. 1). The catalyst structure was confirmed by scanning transmission electron microscopy (STEM) studies at the CNM (an Office of Science user facility also at Argonne).

This reaction had very high energy efficiency and low cost. Indeed, the Faradaic efficiency ― the efficiency with which electrons are transferred in a system facilitating an electrochemical reaction ― was extremely high at more than 90%. The efficiency of the process decreased when CuO and the large Cu clusters became dominant.

These researchers have found a path to electrochemically convert the CO2 emitted from industrial processes, such as fossil fuel power plants or alcohol fermentation plants, into valuable commodities at reasonable cost. Most ethanol currently comes from corn, which is extremely inefficient and produces large amount of CO2. The technique described here will make ethanol production more efficient and less costly.

Although further research is needed to determine how to scale-up the reaction, this catalyst is the first of what likely will become a long series of catalysts developed to turn CO2 into useful chemicals. Researchers have already used this approach to create different catalysts that are all were highly efficient at converting CO2 to other hydrocarbons. The team plans to work with industry partners to advance this promising technology.  ― Dana Desonie

The Center for Nanoscale Materials is one of the five DOE Nanoscale Science Research Centers, premier national user facilities for interdisciplinary research at the nanoscale supported by the DOE Office of Science. Together the NSRCs comprise a suite of complementary facilities that provide researchers with state-of-the-art capabilities to fabricate, process, characterize and model nanoscale materials, and constitute the largest infrastructure investment of the National Nanotechnology Initiative. The NSRCs are located at DOE’s Argonne, Brookhaven, Lawrence Berkeley, Oak Ridge, Sandia and Los Alamos National Laboratories. For more information about the DOE NSRCs, please visit https://​sci​ence​.osti​.gov/​U​s​e​r​-​F​a​c​i​l​i​t​i​e​s​/​U​s​e​r​-​F​a​c​i​l​i​t​i​e​s​-​a​t​-​a​-​G​lance.