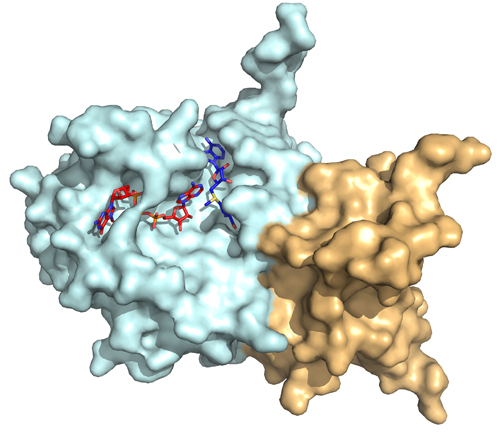 As we all know too well, the virus SARS-CoV-2 causes the severe respiratory illness COVID-19. In parallel with the critical search for a cure, scientists are working diligently to develop effective treatments that can help lower the morbidity of this deadly virus. To develop these therapeutics, we must understand how the virus is able to invade a host’s cells and dodge detection. A recent Nature Communications report based on research carried out at the U.S. Department of Energy’s Advanced Photon Source (APS) reveals key details about how SARS-CoV-2 modifies its messenger RNA and evades immune responses in its host. Using high-resolution x-ray crystallography, the researchers determined a high-resolution structure of the ternary SARS-CoV-2 RNA cap/nsp16/nsp10 complex and the conformational changes that catalytic nsp16 undergoes during RNA cap-binding. The researchers also discovered a distantly located ligand-binding site that allows nsp16 to bind small molecules outside the catalytic pocket. These findings improve our understanding of mRNA capping in coronaviruses and provide a strategy by which scientists could develop small-molecule drugs that will fight and treat the diseases caused by coronaviruses like SARS-CoV-2.

Coronaviruses (CoVs) are enveloped positive-sense RNA viruses that are notorious for causing a variety of diseases from enteritis to respiratory illnesses in both animals and humans. The latest SARS-CoV-2 pandemic illustrates how CoVs can jump between species, gain access to host cells, and propagate with little inhibition. But, in order to design vaccines and treatments that will reduce the burden of the diseases caused by coronaviruses, we must understand their immunopathology.

SARS-CoV-2 is a β-coronavirus that virally encodes mRNAs to mimic host cellular mRNA. To do this, the non-structural protein 16 (nsp16), together with nsp10, methylates the 5′-end of virally encoded mRNAs. Then, nsp16/nsp10 complex converts the mRNA species to the cap-1 form via 2′-O methylation of the ribose sugar of the first nucleotide. So, what information is missing? In short, the catalytic mechanism of mRNA capping is still unclear. Previous reports have presented crystal structures for SARS-CoV nsp16/nsp10 in complex with the methyl donor S-adenosyl methionine (SAM) without an RNA cap. However, no high-resolution structures had been reported for SARS-CoV-2 nsp16/nsp10 in complex with SAM, the methyl donor, and RNA cap m7GpppA. That is, until recently.

The researchers in this study, from University of Texas Health at San Antonio, New England Biolabs, and the Texas Biomedical Research Institute, employed high-brightness x-rays from the APS at the Northeastern Collaborative Access Team (NE-CAT) 24-ID-C beamline to collect the high-resolution x-ray crystallography data on crystals of the nsp16/nsp10/SAM/Cap-O/adenosine complex. (The APS is an Office of Science user facility at Argonne National Laboratory.) With the data collected at NE-CAT, the researchers were able to determine the high-resolution structure of the ternary complex of SARS-CoV-2 RNA cap/nsp16/nsp10 complex captured just before ribose 2′-O methylation. A representation of this structure is shown in Fig. 1. They observed that during RNA cap-binding, the catalytic nsp16 undergoes a conformational change from a binary to ternary state. This transition facilitates the addition of a cap-1 structure, m7GpppNm, which acts as a camouflage for the viral mRNA. As a result, the host cells are tricked into recognizing the viral mRNA as their own. This discovery is especially important because it demonstrates how SARS-CoV-2 can avoid detection by the host’s immune system.

The researchers also discovered a distantly located ligand-binding site in nsp16/10 where small molecules can bind outside the catalytic pocket. The findings may help to guide the development of SARS-CoV-2 therapies. In essence, if scientists are able to design small-molecule drugs that prohibit cap-1 structure addition by nsp16, they can eliminate the “camouflage’ effect and expose the virus to host immune restriction.

The structural details gleaned from this research provide a clearer picture of mRNA capping in coronaviruses. These findings improve our collective understanding of how SARSCoV-2 replicates and avoids detection. ― Alicia Surrao

We are grateful to beamline scientists at NE-CAT for providing synchrotron beam time and facilitating data collection. This work was supported by funding from the Max and Minnie Tomerlin Voelcker Foundation, San Antonio Area Foundation, a Pilot award from the University of Texas (UT) Health San Antonio (UTHSA), and laboratory startup funds from the Greehey Children’s Cancer Research Institute of UTHSA to Y.K.G. R. A.H. is supported by National Institutes of Health CA205224. T.V. is supported by a Research Training Award (RP170345) from the Cancer Prevention Research Institute of Texas (CPRIT). We also thank the x-ray core of UTHSA. Y.K.G. is also supported by a high-impact/high-risk award from the CPRIT (RP190534), and a Rising STARs award from the UT System. NE-CAT is funded by the National Institute of General Medical Sciences from the National Institutes of Health (P30 GM124165). This research used resources of the Advanced Photon Source, a U.S. Department of Energy (DOE) Office of Science User Facility operated for the DOE Office of Science by Argonne National Laboratory under Contract No. DE-AC02-06CH11357.