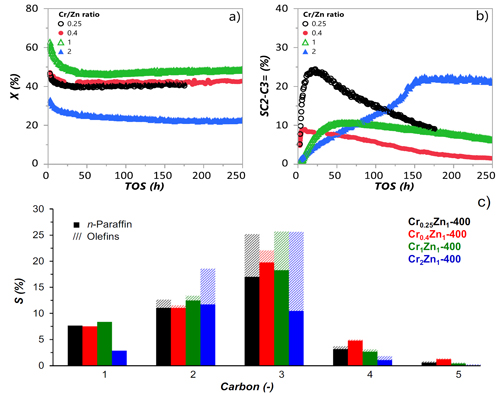 Synthesis gas, also known as “syngas,” is a chemical fuel mixture that contains hydrogen, carbon monoxide, and carbon dioxide. Syngas can be used to produce diesel, methanol, and other high-value chemicals and can be used as an alternative fuel source to produce electricity.  Since the availability of crude oil varies from one geographical region to another, syngas is an important nonpetroleum resource. A highly desirable application is the utilization of syngas to produce chemical materials referred to as light olefins, which are in high demand and are critically important in industrial manufacturing. Many technical challenges have, however, made it difficult to directly convert syngas to light olefins. Recently, research efforts spearheaded by the research team in this study, published in the Journal of Catalysis, can enhance the ability of a chemical reaction to occur; the authors were able to successfully convert syngas to light olefins and affect the conversion process by tweaking various parameters. The researchers used CrZn–SAPO-34 catalysts to accomplish this goal and found that olefin production was sensitive to the catalyst ratio of chromium to zinc as well as the heating temperature. These findings, based upon research at the U.S. Department of Energy’s Advanced Photon Source (APS) have momentous implications for the industrial manufacturing field and help expand the usage potential of syngas.

Although petroleum is a globally prevalent fuel source, it presents complications. Crude oil is not ubiquitously available and can only be found in certain geographical regions. Moreover, crude oil is subject to significant price fluctuations that impact its commercial reliability. Given these undesirables, the alternative fuel resource syngas is invaluable. Syngas is comprised of the molecules hydrogen, carbon monoxide, and carbon dioxide.

One paramount application of syngas is in the production of molecules referred to as olefins. Olefins are also known as alkenes in chemistry and represent compounds that 1) exclusively contain hydrogen and carbon and 2) contain a carbon-carbon double or triple bond. The presence of this double or triple bond makes the hydrocarbon unsaturated, as it is not saturated with hydrogen atoms. Olefins are incredibly important in the industrial manufacturing sector and are pervasive in our society. Examples of light olefins are ethylene and propylene, both of which are important chemical building blocks that are prevalent in the manufacturing of everyday products, for instance apparel designed for athletic use.

Unfortunately, technical challenges have made it difficult to use syngas to produce light olefins with a high selectivity. Fischer-Tropsch synthesis (the process by syngas can be converted into ultra-clean fuels and value added chemicals) can hydrogenate carbon dioxide into light olefins, but selectivity is low. Despite this selectivity hindrance, the Fischer-Tropsch process has been used for the production of diesel and other significant resources.

Very recently, this conversion obstacle was directly addressed by this team of researchers from Dow Benelux B.V. (The Netherlands) and The Dow Chemical Company. The authors assessed the ability of chromium-zinc catalysts to directly convert syngas to light olefins. Using a combination of electron microscopy, x-ray photoelectron and absorption spectroscopy, and x-ray diffraction techniques they were able to evaluate how the heating temperature and the ratio of chromium affect the conversion process.

They found that CrZn–SAPO-34 catalysts can selectively convert syngas to light olefins. The production stability was sensitive to the chromium/zinc ratio as well as the heating temperature. For example, increasing the ratio of chromium to zinc improved the stability of olefin selectivity, while lowering the heating temperature was preferable in regards to catalyst activity. These results are displayed in Fig. 1. The x-ray absorption spectroscopy studies were carried out at the DuPont-Northwestern-Dow Collaborative Access Team (DND-CAT) beamline 5-BM-D at the APS (the APS is an Office of Science user facility at Argonne National Laboratory).

Light olefins hold a massive market demand due to the vital roles they play in the global industrial manufacturing chain. Therefore, these recent findings are tangibly beneficial and further elevate syngas as a useful resource. In fact, it would be unsurprising to see syngas become an even more desirable gas mixture in the near future.  ― Alicia Surrao

DND-CAT is supported by Northwestern University, the Dow Chemical Company, and DuPont de Nemours, Inc. This research used resources of the Advanced Photon Source, a U.S. Department of Energy (DOE) Ofﬁce of Science User Facility operated for the DOE Ofﬁce of Science by Argonne National Laboratory under Contract DE-AC02-06CH11357.

The U.S. Department of Energy's APS is one of the world’s most productive x-ray light source facilities. Each year, the APS provides high-brightness x-ray beams to a diverse community of more than 5,000 researchers in materials science, chemistry, condensed matter physics, the life and environmental sciences, and applied research. Researchers using the APS produce over 2,000 publications each year detailing impactful discoveries, and solve more vital biological protein structures than users of any other x-ray light source research facility. APS x-rays are ideally suited for explorations of materials and biological structures; elemental distribution; chemical, magnetic, electronic states; and a wide range of technologically important engineering systems from batteries to fuel injector sprays, all of which are the foundations of our nation’s economic, technological, and physical well-being.  ― Stephen Taylor