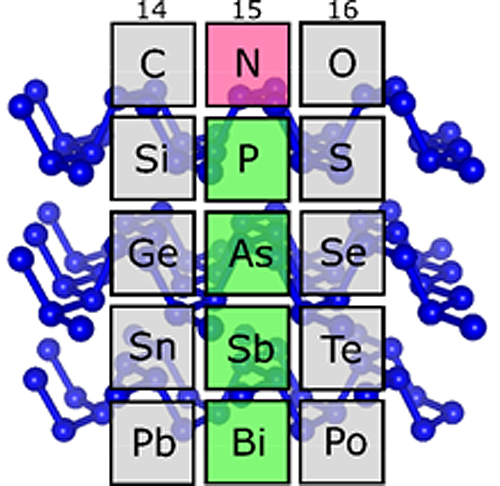 The original Universität Bayreuth press release can be seen here.

In the periodic table of elements there is one golden rule for carbon, oxygen, and other light elements. Under high pressures they have similar structures to heavier elements in the same group of elements. Only nitrogen always seemed unwilling to toe the line – that is, until now. Recently, high-pressure researchers at the University of Bayreuth have actually disproved this special status. They have created a crystalline structure (bp-N) out of nitrogen, which under normal conditions occurs in black phosphorus and arsenic. The structure, which was studied at the German Electron Synchrotron (DESY) and at the U.S. Department of Energy’s Advanced Photon Source (APS), contains two-dimensional atomic layers, and is therefore of great interest for high-tech electronics. The scientists presented their discovery of “black nitrogen” in Physical Review Letters.

When one arranges the chemical elements in ascending order according to their number of protons and looks at their properties, it soon becomes obvious that certain properties recur at large intervals (“periods”). The Periodic Table of Elements brings these repetitions into focus. Elements with similar properties are placed one below the other in the same column, and thus form a group of elements. At the top of a column is the element that has the fewest protons and the lowest weight compared to the other group members. Nitrogen heads element group 15, but was previously considered the “black sheep” of the group. The reason: In earlier high-pressure experiments, nitrogen showed no structures similar to those the heavier elements of this group – especially phosphorus, arsenic, and antimony – exhibit under normal conditions. Instead, exactly this kind of similarities could be observed at high pressures in the neighboring groups headed by carbon and oxygen.

In fact, nitrogen is no exception after all. Researchers at the Bavarian Research Institute of Experimental Geochemistry & Geophysics and the Laboratory for Crystallography at the University of Bayreuth have now been able to prove this with the help of a measuring method they recently developed. Under the leadership of Prof. Dominique Laniel, they made an unusual discovery. At very high pressures and temperatures, nitrogen atoms form a crystalline structure that is characteristic of black phosphorus, which is a particular variant of phosphorus. It also occurs in arsenic and antimony. This structure is composed of two-dimensional (2-D) layers in which nitrogen atoms are cross-linked in a uniform zigzag pattern. In terms of their conductive properties, these 2-D layers are similar to graphene, which shows great promise as a material for high-tech applications. Therefore, black phosphorus is currently being studied for its future potential as a material for highly efficient transistors, semiconductors, and other electronic components.

The Bayreuth researchers propose an analogous name for the allotrope of nitrogen they have discovered: black nitrogen. Some technologically attractive properties, in particular its directional dependence (anisotropy), are even more pronounced than in black phosphorus. However, black nitrogen can only exist thanks to the exceptional pressure and temperature conditions under which it is produced in the laboratory. Under normal conditions it dissolves immediately. "Because of this instability, industrial applications are currently not feasible. Nevertheless, nitrogen remains a highly interesting element in materials research. Our study shows by way of example that high pressures and temperatures can produce material structures and properties that researchers previously did not know existed," said Laniel.

It took truly extreme conditions to produce black nitrogen. The compression pressure was 1.4 million times the pressure of the Earth's atmosphere, and the temperature exceeded 4000° Celsius. To find out how atoms arrange themselves under these conditions, the Bayreuth scientists carried out x-ray diffraction studies using the PETRA III x-ray beamline P02.2 at with the German Electron Synchrotron (DESY) in Hamburg, and the GeoSoilEnviroCARS 13-ID-C,D x-ray beamline at the APS, which is an Office of Science user facility at Argonne National Laboratory. X-rays generated by particle acceleration were fired at the compressed samples. “We were surprised and intrigued by the measurement data suddenly providing us with a structure characteristic of black phosphorus. Further experiments and calculations have since confirmed this finding. This means there is no doubt about it: nitrogen is, in fact, not an exceptional element, but follows the same golden rule of the periodic table as carbon and oxygen do,” said Laniel.

D. L. thanks the Alexander von Humboldt Foundation for financial support. N. D. and L. D. thank the Federal Ministry of Education and Research, Germany (BMBF, Grants No. 5K16WC1 and No. 05K19WC1) and the Deutsche Forschungsgemeinschaft (DFG Projects No. DU 954–11/1, No. DU 393–9/2, and No. DU 393–13/1) for financial support. B. W. gratefully acknowledges funding by the DFG in the framework of the research unit DFG FOR2125 and within projects WI1232. N. D. thanks the Swedish Government Strategic Research Area in Materials Science on Functional Materials at Linköping University (Faculty Grant SFO-Mat-LiU No. 2009 00971). GeoSoilEnviroCARS (The University of Chicago, Sector 13), Advanced Photon Source (APS), Argonne National Laboratory. GeoSoilEnviroCARS is supported by the National Science Foundation – Earth Sciences (EAR – 1634415) and Department of Energy- GeoSciences (DE-FG02-94ER14466). This research used resources of the Advanced Photon Source, a U.S. DOE Ofﬁce of Science User Facility operated for the DOE Ofﬁce of Science by Argonne National Laboratory under Contract No. DE-AC02-06CH11357.