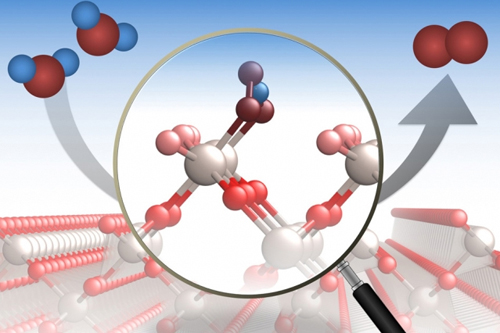 The MIT press release by David L. Chandler can be read here.

A crystalline compound called ruthenium dioxide is widely used in industrial processes, where it’s particularly important for catalyzing a chemical reaction that splits molecules of water and releases oxygen. But the exact mechanism that takes place on this material’s surface, and how that reaction is affected by the orientation of the crystal surfaces, had never been determined in detail. Now, a team of researchers carrying out studies at the U.S. Department of Energy’s Advanced Photon Source (APS) has for the first time been able to directly study the process at an atomic level. The new findings were reported in the journal Nature Catalysis.

The work involved years of collaboration and an iterative process between atom-by-atom computer modeling of the catalytic process, and precision experiments including some using the APS, an Office of Science user facility at Argonne National Laboratory, which allows atomic-scale probing of the material’s surface via high-energy x-rays.

“I think the exciting aspect of the work is that we push a little bit the boundary of our understanding of the catalysis of splitting water,” said MIT Professor Yang Shao-Horn, lead author of the study. “We try to learn what happens on surface oxygen sites under reacting conditions, a critical step toward defining the active sites for splitting water.”

The catalytic process, known as the oxygen evolution reaction, is crucial for producing hydrogen and ammonia for energy use, making synthetic carbon-neutral fuels, and making metals from metal oxides. And currently, ruthenium dioxide surfaces are “the gold standard of catalysts for water splitting,” according to Shao-Horn.

While the process of splitting water to separate oxygen atoms from their two attached hydrogen atoms at a catalyst’s surface may seem straightforward, at the molecular level, said recent MIT graduate student Reshma Rao, “this interface is quite complicated. You have a really large number of water molecules and your surface can be completely disordered and have multiple processes happening at the same time.”

In order to make sense of it all, “the first thing we do is reduce the complexity by having really well-defined single crystal surfaces” where the exact location of every atom has been determined using synchrotron x-ray surface diffraction measurements carried out at X-ray Science Division (XSD) beamline 12-ID-D to probe the surface. Beamline 12-ID-D is operated by the XSD Chemical & Materials Science Group at the APS, an Office of Science user facility at Argonne National Laboratory.

“Using this technique, we can basically zoom into that top layer,” Rao said, and then they can vary the voltage applied to the surface to see how the water oxidation process is affected. In the new study, because the researchers had determined the activity and reaction sites for different surface orientations of the crystal, they were able to incorporate that information into their molecular modeling on the computer. This allowed them to get more insight into the energetics of reactions taking place at specific atomic configurations at the surface.

What they found was that “it's a lot more intriguing,” because there's not just one site that’s responsible for the reaction, Rao said. “It's not like each site is identical, but you have different sites that can play different roles” in the set of steps in the reaction. Different rate-determining steps can be possible, with the relative rates of water splitting influenced by the orientation of the crystal lattice faces exposed, and the new insights may help in optimizing the way catalysts are prepared in order to optimize the reaction rates.

Rao said that understanding at a molecular level the influence of these subtle differences could help in the designing of future catalysts that could surpass the highest activity levels that would be predicted by the traditional methods of describing electronic structures.

Shao-Horn adds that while their study looked specifically at ruthenium dioxide, the modeling work they did could be applied to a variety of catalytic processes, all of which involved similar reactions of breaking and remaking chemical bonds through interactions with active sites on the material’s surface.

The modeling of surface activity could be used to help in the screening of new potential catalytic materials for a variety of reactions, for example to find materials that use less of rare, expensive elements.

This work was supported in part by the Toyota Research Institute through the Accelerated Materials Design and Discovery program. This work was supported in part by the Skoltech-MIT Center for Electrochemical Energy and the Cooperative Agreement between the Masdar Institute, UAE and the Massachusetts Institute of Technology, USA (grant no. 02/MI/MIT/CP/11/07633/GEN/G/00). The work by H.Y. was supported by the U.S. Department of Energy (DOE) Office of Science-Basic Energy Sciences (BES), Materials Sciences and Engineering Division, and the work by H.Z. was supported by DOE-BES, Scientific User Facility Division (SUFD) under contract no. DE-AC02-06CH11357. The work by A.M. was supported by DOE-BES-SUFD under contract no. DE-AC02-76SF00515. A.F.P. acknowledges the Danish Ministry for Higher Education and Science for an EliteForsk travel grant and the Strategic Research’s project NACORR (grant no. 12-133817). This work used the Extreme Science and Engineering Discovery Environment (XSEDE), which is supported by National Science Foundation grant no. ACI-154856283. This research also used resources of the National Energy Research Scientific Computing Center, a DOE Office of Science User Facility supported by the Office of Science of the U.S. DOE under contract no. DE-AC02-05CH11231. T.V. and N.B.H acknowledge support through V-Sustain: the VILLUM Centre for the Science of Sustainable Fuels and Chemicals (grant no. 9455) from VILLUM FONDEN. I.E.L.S acknowledges the Peabody Visiting Associate Professorship, awarded by the Department of Mechanical Engineering at Massachusetts Institute of Technology. This research used resources of the Advanced Photon Source, a U.S. DOE Office of Science User Facility operated for the DOE Office of Science by Argonne National Laboratory under Contract No. DE-AC02-06CH11357.