Unraveling the Mechanisms Responsible for Hydrogen Embrittlement of Steel 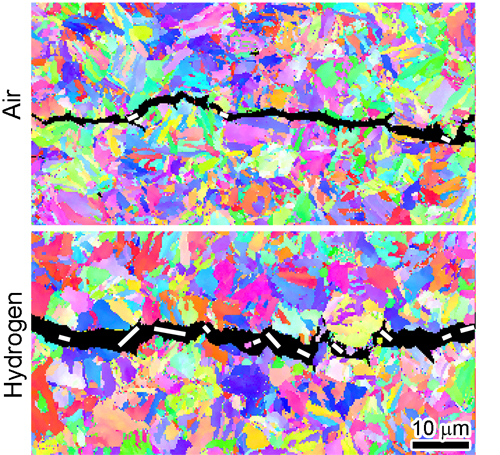 Exposure to hydrogen gas (H2) causes the embrittlement of steel, a phenomenon first observed nearly 150 years ago. Embrittlement means that the steel's ductility is reduced. Although this process has been extensively examined using a variety of analytical techniques, such as optical imaging and electron microscopy, the mechanisms, or combination of mechanisms, that are chiefly responsible for hydrogen-induced embrittlement remain unclear. One of the challenges encountered when investigating hydrogen embrittlement is that the sample being examined is usually removed from the hydrogen environment prior to analysis. This precludes real-time imaging of the hydrogen/steel dynamic. To address this limitation, researchers using the U.S. Department of Energy’s Advanced Photon Source (APS) carried out the first application of high-energy x-ray diffraction (HEXD) to a steel sample during H2 exposure. Analysis indicates that the hydrogen-induced embrittlement arose from a combination of two distinct mechanisms. Understanding the primary mechanisms responsible for steel embrittlement caused by H2 exposure should help materials scientists develop strategies to ameliorate this problem, which has important ramifications for hydrogen storage and transport, as well as being a prerequisite for realizing a future hydrogen economy.

External forces acting on a steel object are translated into microscopic deformations and stresses within its polycrystalline structure. If the magnitude of these stresses is sufficiently large, microscopic fatigue cracks will form and propagate over time. Crucially, under the same external loading conditions, any fatigue cracks exposed to hydrogen will grow 10 to 100 times faster than those exposed to air. Microscopic fatigue cracks in steel are shown in Fig. 1. The crack in the upper panel formed in air, while the lower crack formed in H2.

Numerous mechanisms have been proposed to explain the significantly higher fatigue crack growth observed in steels exposed to hydrogen. The two mechanisms tested in this study were hydrogen enhanced decohesion (HEDE) and hydrogen enhanced localized plasticity (HELP). The HEDE model explains increased crack growth as resulting from hydrogen promoting decohesion within the steel. Broadly speaking, decohesion refers to the loosening of atomic or molecular bonds. Sufficient decohesion allows a crack to propagate and can occur in two ways: Decohesion within individual grains is referred to as transgranular decohesion (labeled T-HEDE), while decohesion between grains is called intergranular decohesion (IG-HEDE).

Over the years, materials scientists have cited different experimental results to promote either the HEDE or HELP models. However, recent studies favor a more balanced approach in which the HEDE and HELP mechanisms are seen as complimentary, with both playing a role in explaining hydrogen's deleterious effect on crack formation and growth.

To unravel which mechanisms play significant roles in hydrogen embrittlement, samples of the low-alloy steel AISI 4130 were subjected to several experimental tests, including high energy x-ray diffraction (HEXD) experiments at the X-ray Science Division 1-ID-E x-ray beamline at the APS, an Office of Science user facility at Argonne National Laboratory. In the HEXD protocol, 4130 steel samples were placed in either air or hydrogen environments. The samples were then cyclically stretched and relaxed to induce microscopic fatigue cracks. 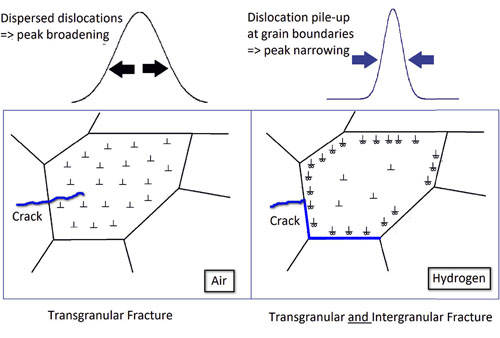 Figure 2 illustrates some of the HEXD results. Broadening of the diffraction peaks occurred for the sample in air (left side of Fig. 2), indicating that dislocations were spread more-or-less evenly across the entire grain. In contrast, the narrower diffraction peaks recorded for the sample in hydrogen (right side of Fig. 2) indicate an accumulation of dislocations at the grain boundary. The accumulation of dislocations supports the HELP model of H2-induced embrittlement. However, the fact that the fracture in the hydrogen environment (right side of Fig. 2) also appeared between the grain boundary, i.e., was intergranular, lends support to the intergranular decohesion, or IG-HEDE, model.

The experimental results indicate that both the HEDE and HELP mechanisms play important roles in the hydrogen embrittlement of steel. Moreover, the HEXD data should also prove useful in calibrating models of fatigue crack formation for use in future studies.  ― Philip Koth