Removing the Uncertainty of Flame-Sampling with X-ray Fluorescence Spectroscopy 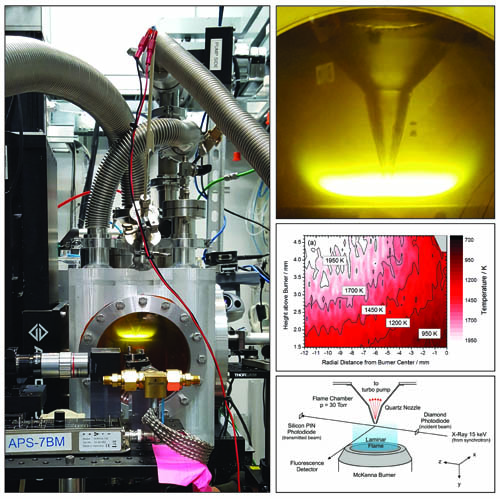 Similar to the uncertainty principle of quantum physics is the observer effect, in which measuring or observing a phenomenon changes it.  It's a principle with important implications for one of the most important tools of combustion chemistry, the flame-sampling experiment, in which chemical reactions are observed and studied within the dynamic environment of a laminar flame using a quartz-tipped sampling probe.  The probe, however, affects the flame, thus inevitably altering the flow and temperature fields and thus, the measured data.  The precise effects of the distortions created by the sampling probe, and how to minimize and compensate for them in experimental results and models are vital questions.  Researchers sought to provide more definitive insights through x-ray fluorescence spectroscopy observations of probe-perturbed flames carried out at the U.S. Department of Energy’s Advanced Photon Source (APS).  Rather than refuting the value of flame-sampling due to the unavoidable perturbations caused by sampling probes, these experiments and the resulting data promise to improve the utility and accuracy of flame-sampling analyses and models.

Following previous work, which accurately imaged the two-dimensional temperature field around a quartz probe in a low-pressure laminar pre-mixed C2H4/O2/Kr/Ar flame, the research team from the Sandia and Argonne national laboratories examined how the geometry of four different sampling probes affects the temperature field.  Using storage ring-based x-ray fluorescence spectroscopy at the X-ray Science Division 7-BM beamline at the APS (an Office of Science user facility at Argonne) the investigators collected fluorescence signals of Kr atoms added to the flame and converted these into temperature measurements using methods developed in their earlier studies (Fig .1).

The measurements were made in three dimensions: flame temperature, radial distance from the flame centerline, and probe distance from the burner, along with centerline temperature measurements of both perturbed and unperturbed flames.  This allowed the creation of three-dimensional plots to provide an accurate picture of a broad range of temperature fields.  The quartz probes, made in the Glass Workshop at Argonne, had various opening angles from 15° to 45° at 10° increments, each with a 400-micrometer aperture.  The precision of the probe shapes was important for interpreting the differences among the observed effects.

At burner-probe separations of 4 millimeters (mm) and 7 mms along the centerline, temperature differences in the flame were clearly evident among the various probe geometries, with a difference of over 1000 K between perturbed and unperturbed flames with the 15° and 45° probes.  The tip of the 15° probe was also 300 K higher than the tip of the 45° probe at the same burner separation.  The 22 millimeter burner-probe separation measurements were in the post-flame zone and showed little temperature difference between perturbed and unperturbed flames.  The experimenters note that the sampling probe acts as a heat sink at all separations, affecting the flame more significantly at shorter burner-probe distances by physically distorting the flow field, which does not occur at larger separation distances.

Measurements at different burner-probe separations and distances in the radial axis conducted up to 20 mm from centerline displayed similar effects.  At 0-mm radial distance, temperatures were essentially identical between the 15° and 45° probes in the post-flame region and only began to show up when the burner-probe separation was reduced to 7 mm.  At a separation of 3.8 mm in the bottom of the flame zone, temperature differences were more apparent, with the 45° probe causing flow perturbations out to 15-mm radial distance, with a temperature drop of about 1200 K.

The investigators note some intriguing effects when plotting temperature differences against the 15° and 45° probe geometries.  The maximum difference between the two probes is seen not along the centerline, but 4 mm outward, and temperatures 3 mm below the probe tip show even greater differences.  When the tip is moved closer to the burner in the pre-heat zone at 1.87 mm, very large flow perturbations are seen with all probes.  Fluid dynamics calculations may be needed to fully interpret these phenomena.

Based on this work, the experimenters recommend a greater standardization of sampling probe design, or at least greater emphasis on clearly specifying its parameters when reporting experimental and modeling results.  This will only facilitate both the useful comparison of experimental data among different research groups and of data with theoretical models, reducing experimental uncertainties.   ― Mark Wolverton

This material is based upon work supported by the U.S. Department of Energy (DOE) Office of Science-Basic Energy Sciences. The work at Argonne was performed under Contract No. DE-AC02-06CH11357. Sandia National Laboratories is a multi-mission laboratory managed and operated by National Technology and Engineering Solutions of Sandia, LLC., a wholly owned subsidiary of Honeywell International, Inc., for the U.S. DOE National Nuclear Security Administration under contract DE- NA0003525. This research used resources of the Advanced Photon Source, a U.S. DOE Office of Science User Facility operated for the DOE Office of Science by Argonne National Laboratory.