Resolving Some Mysteries of Cement Formation 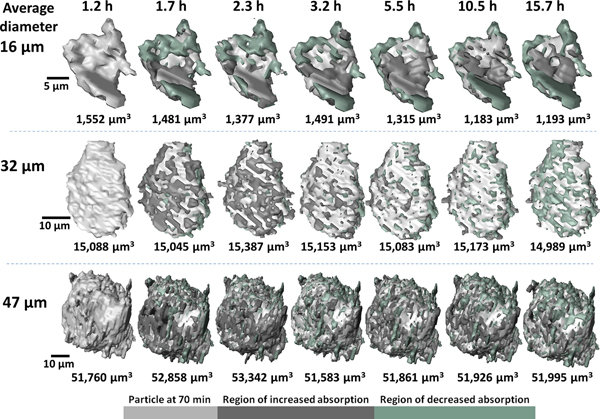 Cement is a mineral-based material that binds together sand and rock to form concrete. Although the use of cement stretches back into antiquity, and in spite of decades of scientific inquiry, the exact process by which it transforms from a fresh paste into a solid largely remains a mystery. To shed light on this process, researchers utilized complementary imaging methods at the U.S. Department of Energy’s Advanced Photon Source (APS) to continuously monitor changes in cement as it hardened over the first 15 hours of hydration at nano and micro scale resolutions. Recording the changes to large numbers of particles over the first few hours of hydration allowed the researchers to draw important inferences about the mechanisms driving cement hydration. It is anticipated that the insights gained will aid in optimizing cement ingredients and processes to provide the most durable and cost-effective concrete for different applications.

Portland cement is the world's most popular type of cement. It is produced by first mixing together limestone, which is mostly composed of calcium carbonate (CaCO3), along with minerals containing aluminum, iron, sulfur, and other elements. This mixture is then ground up and baked at high heat, forming small, dry lumps called “clinker.” The clinkers are subsequently milled into a powder, along with other ingredients to form finished Portland cement.

Adding water to cement initiates a cascade of complex exothermic chemical reactions collectively referred to as hydration. During hydration the cement begins as a slurry and increasingly hardens over time as different types of mineral compounds are formed.

Traditional studies have most often measured the large-scale physical and chemical properties of cement as it hardens. For instance, heat flow measurements show that hydration initially produces considerable heat for several minutes before falling to a minimum after an hour or so (the induction period), and then rapidly rising again (the acceleration period). Likewise, by examining cement samples extracted at various stages of hydration, chemists have identified the formation of many different types of minerals.

Scientists have also examined cement at the microscopic scale using techniques such as electron and x-ray microscopy. To do this, scientists stop the hydration process with alcohol or acetone to remove water prior to imaging.

Unfortunately, studying the bulk properties of cement during hydration cannot provide details about the microscopic mechanisms driving the process. Conventional microscopy methods have also proven to be inadequate. For one thing, applying a drying agent to halt hydration can alter the cement's microscopic structure and chemistry. Moreover, many x-ray techniques cannot fully penetrate the mineral sample, while particle movement has largely frustrated attempts at x-ray tomography (three-dimensional [3-D] imaging) due to the required hours-long exposure times. The inadequacies of previous investigations have left many fundamental questions unanswered, particularly about the induction and acceleration periods of hydration.

The key was the advanced  imaging methods employed by the research team from Oklahoma State University and Princeton University, together with colleagues from the APS and the Argonne National Laboratory Center for Nanoscale Materials, which consisted of fast-computed tomography and nano-computed tomography, both carried out at X-ray Science Division beamline 2-BM-A,B of the APS, an Office of Science user facility at Argonne. The authors note that this was possible because of advances in x-ray beamline detector design and the high photon ﬂux afforded by the APS. The two imaging techniques allowed 3-D imaging of particles at multiple length scales, from micron-sized particles down to nano-sized ones. These imaging techniques relied on the highly penetrating power of the APS x-ray beam, which required only seconds to obtain a tomographic (3-D) data set. A new tomograph was produced every 10 minutes over approximately 15 hours of sample hydration. After gathering the x-ray data, a region measuring around 1 millimeter across by 0.1 millimeter tall was selected for processing, allowing some 60,000 particles to be imaged.

Figure 1 shows the dramatic evolution of three particles, each representing a different size range. The 3-D images were captured near the end of the induction phase and continued throughout the acceleration phase.

The researchers in this study drew a number of broad conclusions from the accumulated 3-D images and measurements of particle composition. For instance, both micron-scale and nano-scale particles exhibit uneven growth and dissolution on their surfaces. However, size does matter: during the induction phase particles larger than 20 microns across accumulated minerals with a high x-ray absorption on their surfaces, while the surfaces of smaller particles mostly exhibited mineral dissolution. It is hoped that these and other conclusions drawn from the multi-scale imaging methods will improve control over the induction and acceleration phases of cement.   ― Philip Koth

This work was sponsored by funding from Federal Highway Administration (FHWA) Exploratory Advanced Research (EAR) program and funding from the United States National Science Foundation CMMI 1150404 CAREER Award. This research used resources of the Advanced Photon Source, a U.S. Department of Energy (DOE) Ofﬁce of Science User Facility operated for the DOE Ofﬁce of Science by Argonne National Laboratory under Contract No. DE-AC02-06CH11357.

The Center for Nanoscale Materials is one of the five DOE Nanoscale Science Research Centers (NSRCs), premier national user facilities for interdisciplinary research at the nanoscale supported by the DOE Office of Science. Together the NSRCs comprise a suite of complementary facilities that provide researchers with state-of-the-art capabilities to fabricate, process, characterize and model nanoscale materials, and constitute the largest infrastructure investment of the National Nanotechnology Initiative. The NSRCs are located at DOE’s Argonne, Brookhaven, Lawrence Berkeley, Oak Ridge, Sandia and Los Alamos National Laboratories. For more information about the DOE NSRCs, please visit https://​sci​ence​.osti​.gov/​U​s​e​r​-​F​a​c​i​l​i​t​i​e​s​/​U​s​e​r​-​F​a​c​i​l​i​t​i​e​s​-​a​t​-​a​-​G​lance