Closing in on the Holy Grail of Targeted Drug Delivery 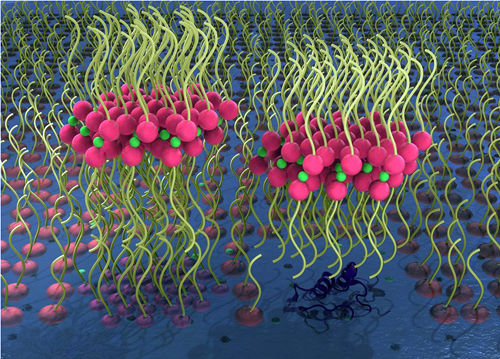 Advances in the evolving field of nanomedicine are helping scientists to design drug delivery systems that specifically target diseased tissues without harming healthy tissues. These include phospholipid-based drug delivery systems (PDDSs), which are particularly useful because scientists can modify the makeup of these systems to change their functions to meet specific treatment needs. Collecting data at the U.S. Department of Energy’s Advanced Photon Source (APS), researchers used x-ray reflectivity and grazing incidence x-ray diffraction to examine the three-dimensional molecular interaction between phospholipids and enzymes that leads to the release of drugs from these delivery systems. The results of this study will inform future research in PDDS designed to optimize nanomedicine composition for drugs targeting diseased tissue sites.

The ability to specifically target a drug to diseased cells without affecting healthy ones is considered the Holy Grail for the treatment of complex diseases. Nanomedicine is a relatively new and developing science that combines nanotechnology with biomedical and pharmaceutical sciences. Over the past two decades, several types of nanomedicines have shown promise in achieving the dream of delivering drugs to specific targeted sites.

Exploiting the overexpression of the enzyme secretory phospholipase A2 (sPLA2) in various tumors and inflammatory diseases represents one strategy for enzyme-triggered release of liposomal drug carriers selectively at a target tissue. Among current systems of nanomedicines, PDDSs have gained extensive attention as carriers for a wide range of drugs. This is because PDDSs, containing substances that occur naturally in biological membranes, are both nontoxic and biodegradable. For this reason, a few liposomal-vesicle-based nanomedicines were approved by the U.S. Food and Drug Administration for clinical uses.

Scientists at the University of Illinois at Chicago recently performed a study to develop “smart” liposomal nanoparticles for targeting delivery of biologically active payloads to diseased tissues. They aimed to optimize the composition of the liposomal vesicles based on understanding of the molecular interactions that take place between enzymes and polymer-phospholipids.

According to the researchers, changing the composition of the PDDS (with respect to its lipids, polymer conjugation, and membrane proteins) can alter its nanostructures, physicochemical characteristics, and biomedical functionalities. This flexibility allows scientists to change the design of these systems and modify liposome behavior in vivo according to specific therapeutic needs. However, because of the enormous number of possible modifications, optimizing the PDDS structure is not feasible by empirical trials. Systematic understanding of the molecular interactions between polymer-phospholipids and enzymes is therefore necessary but challenging.

Hoping to gain insight into these molecular interactions, the researchers, along with colleagues from The University of Chicago, used high-brightness x-rays at ChemMatCARS beamline 15-ID-C of the APS (the APS is an Office of Science user facility at Argonne National Laboratory). They investigated the molecular packing, interaction, and degradation of phospholipids catalysed by enzymes, using a model phospholipid known as DPPC, and the enzyme sPLA2.

The researchers found that after sPLA2 degraded the phospholipid DPPC, fatty acids and divalent calcium ions came together to form highly-ordered, inverted bilayer and tri-layer structures (Fig. 1). This provides a molecular-level explanation of how the enzyme activity damages the phospholipid structure and leads to bursting of the liposomes and drug release.

The results of this study will be critical in helping to guide the design of PDDSs that are stable as they circulate in the bloodstream, but can quickly dissemble at the site of disease such as inflammation or cancer in the presence of an increased amount of enzyme.  — Nicola Parry

The study is supported by the National Science Foundation (NSF) Nanomanufacturing Program (NSF CAREER #1350731). ChemMatCARS Sector 15 is principally supported by the Divisions of Chemistry (CHE) and Materials Research (DMR),NSF, under grant number NSF/CHE-1834750. This research used resources of the Advanced Photon Source, a U.S. Department of Energy (DOE) Office of Science User Facility operated for the DOE Office of Science by Argonne National Laboratory under Contract DE-AC02-06CH11357.