A Discovery Opens the Door for Novel Thermoelectric Materials 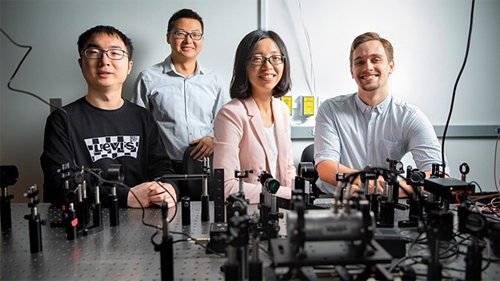 The Cornell Chronicle press release by Syl Kacapyr can be read here.

A Cornell University-led team of engineers carrying out studies at the U.S. Department of Energy’s Advanced Photon Source (APS) has discovered a crystalline material with ultralow thermal conductivity―thus, the ability to turn heat into electricity―which could lead to the design of novel energy conversion materials and devices.

Hybrid (organic-inorganic) perovskites are a new class of materials that have shown great potential for improving solar cells because of their ability to cheaply and efficiently convert light into electricity, but little is understood about their ability to conduct heat.

After studying a popular hybrid perovskite and identifying the mechanisms for its low thermal conductivity, Zhiting Tian, assistant professor of mechanical and aerospace engineering, turned her attention to a hybrid perovskite analogue, methylammonium bismuth iodide (CH3NH3)3Bi2I9, which she hypothesized would have an even lower thermal conductivity because of the unique disconnected structure of its inorganic molecules.

The thermal conductivity of the material was measured to be .23 Watts-per-meter-Kelvin at 300 kelvins (80 degrees Fahrenheit), among the lowest ever observed in a crystal. The results are detailed in the study published in the journal Physical Review Letters.

“Previously we thought only amorphous material can reach very low thermal conductivity,” said Tian, referring to material lacking lattice structure, “but I think this study, along with several recent studies on hybrid materials, may change our view and point us in a new direction.”

One application for materials with ultralow thermal conductivity is in thermoelectrics – devices that can turn heat directly into electricity. A notable example is aboard the Curiosity Mars rover, which converts the heat released from the decay of a radioactive material into electricity. Engineers are hoping to expand the use of thermoelectrics using new materials that make the technology cheaper and more efficient so that they can be used to capture heat from the sun, cars or even the human body. 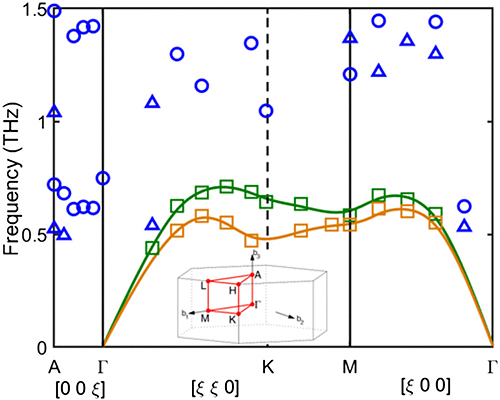 For the study, Tian led a team of researchers from Virginia Tech, Lawrence Berkeley National Laboratory, the Illinois Institute of Technology, and Argonne National Laboratory in addition to Cornell that grew a single crystal of their hybrid material. They then bombarded it with high-energy x-rays at the X-ray Science Division 3-ID-C x-ray beamline at the APS using the inelastic x-ray scattering technique to measure how the x-rays scattered (Fig. 1). The APS is an Office of Science user facility at Argonne National Laboratory. The results showed numerous unexpected data points, which all indicated that the material would be soft and possess an ultralow thermal conductivity.

Tian said the unique properties have to do with the interactions between the material’s organic and inorganic molecules. Typically, inorganic molecules―defined by their lack of carbon-hydrogen bonds―bond tightly to each other and have strong interactions with adjoining inorganic compounds, but that is not the case with methylammonium bismuth iodide. Instead, the weak electrostatic interactions between molecules provide a difficult pathway for phonons to travel, giving the material a poor ability to transport heat.

The work provides valuable benchmark data of thermal transport properties for organic-inorganic perovskites, and will help in the design of new materials for energy applications, according to Tian.

Tian’s research group is now characterizing the properties of a new class of two-dimensional organic-inorganic perovskites in search of even lower thermal conductivity.

“It’s an emerging class of materials and there’s still so much we don’t know,” said Tian. “I find it really fascinating to see these properties that were not observed before in inorganic materials.”

This work was funded by a National Science Foundation CAREER Award (CBET-1839384) to Z.T. This work was supported by the Molecular Foundry at Lawrence Berkeley National Laboratory, a user facility supported by the Office of Science-Basic Energy Sciences, of the U.S. Department of Energy (DOE) under Contract No. DE-AC02-05CH11231. This research used resources of the Advanced Photon Source, a U.S. DOE Office of Science User Facility operated for the DOE Office of Science by Argonne National Laboratory under Contract No. DE-AC02-06CH11357.